Today, the Georgia State Quarter Coin remembers the raising of the first Liberty pole in the state at Savannah on June 5, 1775.

Let’s look at two versions of the events—one from an historian over 100 years after the fact and the second from an Englishman who was there that day.

First, from The History of Georgia: Revolutionary epoch by Charles Colcock Jones, published in 1883:

It had been the custom in the province to celebrate with festivities and military salutes the king’s birthday, which occurred on the 4th of June.

Notwithstanding the unsettled condition of affairs, Governor Wright was loath to omit the usual formalities.

He accordingly, on the 1st of June, issued orders for suitable preparations in anticipation of the event.

On the night of the 2d a number of the inhabitants of Savannah came together and, having spiked all the cannon on the bay, dismounted and rolled them to the bottom of the bluff.

Such was the pointed insult offered to the memory of his majesty.

It was with great difficulty that some of these disabled guns could be drilled and restored to their positions in battery in time to participate in the loyal ceremonies of the 4th, which, as that day chanced to fall on Sunday, were observed on the Monday following.

The first liberty pole erected in Georgia was elevated in Savannah on the 5th of June, 1775.

The Royalists were then celebrating the king’s birthday.

The “Liberty Boys,” in testimony of their desire for a reconciliation with the mother country on the basis of a recognition of constitutional principles and colonial privileges, at the feast which they prepared drank as the first regular toast The King. The second was American Liberty.

Within a week afterwards thirty-four leading friends to the union of the colonies convened in Savannah and adopted a series of spirited resolutions recommending an early association of Georgia with her sister colonies and suggesting an equitable adjustment of the unhappy differences existing between Great Britain and America.

On the 21st of June was published a call signed by Noble W. Jones, Archibald Bulloch, John Houstoun, and George Walton, requesting the inhabitants of the town and district of Savannah to meet at the liberty pole on the following day at ten o’clock in the forenoon for the purpose of selecting a committee to bring about a union of Georgia with the other colonies in the cause of freedom.

The alarming situation of affairs in America, and particularly in this province, was urged as a reason for punctual and general attendance.

At the appointed place and designated hour many were present. A council of safety, consisting of William Ewen, president, William LeConte, Joseph Clay, Basil Cooper, Samuel Elbert, William Young, Elisha Butler, Edward Telfair, John Glenn, George Houstoun, George Walton, Joseph Habersham, Francis H. Harris, John Smith, and John Morel, members, and Seth John Cuthbert, secretary, was nominated, with instructions to maintain an active correspondence with the Continental Congress, with the councils of safety in other provinces, and with the committees appointed in the other parishes in Georgia.

This business concluded, a number of gentlemen dined at Tondee’s tavern.

The union flag was hoisted upon the liberty pole, and two field-pieces were posted at its foot.

Thirteen patriotic toasts were drunk, each being responded to by a salute from the cannon and by martial music.

Second, An Impartial and Authentic Narrative of the Battle Fought on the 17th of June, 1775, by John Clarke (lieutenant of marines), initially published in 1775 was reprinted with more information in 1868.

The letter from Savannah described the Liberty pole event:

Having promised the Public, to communicate any intelligence that I might receive from America, I have the pleasure of presenting them with Extracts from three Letters just received; two from Boston, the other from Savannah in Georgia.

The last of which shows how fast the spirit of opposition to Government is travelling through the whole Continent of America, as now the Two Floridas only are wanting to complete the whole Continent, from Boston to the South, being engaged.

This place is so involved in the American disputes that I am afraid it will be ruined.

A number of mad headed fellows (who call themselves Sons of Liberty) headed by a Merchant or two of this place, two nights before the King’s birthday, tumbled the cannons from the battery down the bank of the river, that they might not fire on that day, and spiked up the touch-holes of every one of them.

And because some Captains of vessels with their Men, and other well-affected Gentlemen of the Town, with indefatigable pains, and after working the whole night, got them up again, they had the assurance to go to some, and write to others, to leave the Province in seven days.

Next Tuesday the time expires; and they seem determined to compel them to go, but we are resolved to oppose them with all our power.

They even went to a house, on Monday, when the Governor and Council were dining together; and a large body of them, having assembled, set up what they call a Liberty-Tree, with a white flag, under which they discharged forty five guns, and drank Success to the American Arms.

You may be sure I was not to be idle at seeing such proceedings, and being a little elevated with drinking his Majesty’s health, got into the scuffle, lost my hat and wig, and in return brought away a black eye, a swelled lip, and lost a little of the bark of my nose.

The Country People are flocking in to their assistance; but those who intend to support the Governor in opposing their unlawful attempts are to meet him and the Council tomorrow, to concert methods for opposing them; and I assure you I intend to make one at the meeting ; and our number will be nearly equal, it is imagined.

The Georgia State Quarter Coin shows with an artist’s image of people erecting a Liberty pole, circa 1875. 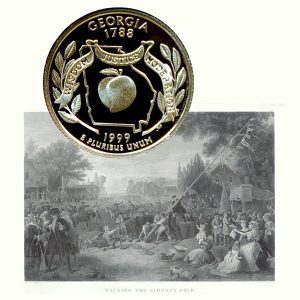