Today, the Louisiana State Quarter Coin remembers when President Arthur in Washington, DC, formally opened the World’s Fair in New Orleans with the press of a telegraphic key on December 16, 1884.

From the Washington, DC, Evening Critic newspaper of December 16, 1884:

A Brilliant Opening, Both in New Orleans and Washington.

The Grand International Cotton Centennial and World’s Exposition was opened today under the most brilliant and promising auspices in Now Orleans, and with the assistance of an ingenious, scientific, distinguished and memorable Washington attachment or annex.

Paradoxical as it may sound, the Exposition was opened at noon in New Orleans and at 1 p.m. in Washington, and still at the same moment in both places.

With true Yankee ingenuity the electric spark, generated in Washington, liberated at the White House, and flashing over the wire, opened the Now Orleans Exposition an hour before it started at least according to Washington timepieces.

The telegraph instrument necessary to apply the vivifying touch that set the great industrial city in the Exposition Building in motion was placed in position in the east room yesterday evening and Secretary Frelinghuysen conducted a conversation over the wire with Director General Burke in New Orleans.

The instrument is on a large table in front of the central windows of the East Room, and from it the wire extends to the telegraph office overhead and thence to New Orleans by way of Western Union lines.

Everything was so fixed that the touching of the key transmits the motive power by which the starting of the machinery is insured.

The East Room was crowded at the appointed time, invitations having been issued to members of the Diplomatic Corps, members of the cabinet, the President of the Senate, the Speaker of the House of Representatives and the Chief Justice of the Supreme Court, and the ladies of their families and personal friends of the President.

At the moment of applying the touch it was understood that the Governor of Louisiana and Mayor of New Orleans, Dr. Talmage, the Exposition officials, and Secretaries Teller and Hatton were assembled at the New Orleans end of the wire.

The telegraphic instrument with which President Arthur opened the New Orleans Exposition was placed in the East Room of the Executive Mansion yesterday.

The wire was tested this morning, and found to be in fairly good condition; but the recent storms caused it to work a little hard.

Mr. Morell Marean, local manager of the Western Union Telegraph Company, was in charge of the wire.

At 12 o’clock members of the Diplomatic. Corps, Congressional committees and invited guests began to arrive. The Marine Band was in attendance, and enlivened the ceremonies with national airs.

At 1:30 o’clock Marshal McMichael explained to the assemblage that the delay in the proceedings was duo to intelligence received from New Orleans to the effect that the committee entrusted with the opening of the Exposition had not yet arrived at the Exhibition building, but were expected in less than half an hour.

The President at 1:45 was notified that the Board of Managers were ready to hear from him.

The President entered the East parlor, and is ready to open the Exposition.

The President, Senator Edmunds and Speaker Carlisle took their places behind the telegraph table at five minutes of 2 o’clock.

The Cabinet, represented by Secretary Frelinghuysen, Lincoln, Chandler, McCullough and Attorney-General Brewster, stood at its sides, and behind them the Senate and House committees ranged themselves.

Mr. Bancroft also stood close by. During the delay that ensued the President chatted pleasantly with the representatives of the press, who were grouped behind him.

The President opened the New Orleans Exposition a few minutes after 3 o’clock this afternoon.

The following is the full text of President Arthur’s address, formally opening the Exposition:

“In the name of the people of the Republic I congratulate the citizens of the Southwest in their advancing prosperity, as manifested by the great International Exposition now about to open.

“The interest of the Nation in that section of our commonwealth has found expression in many ways, and notably in appropriations tor the improvement of the Mississippi and by the National Loan to promote the present Exposition.

“Situated, as it is, at the gateway of the trade between the United States and Central and South America, it will attract the attention of the people of the neighboring nations of the American system, and they will learn the importance of availing themselves of our products, as we will of theirs, and thus, not only good-feeling, but a profitable intercourse between the United States and the States of Central and South America will be promoted.

“The people also of our own country thus brought closer together will find in this exposition of competitive industries motives tor strengthening the bonds of brotherhood.

“Railroads, telegraph lines and submarine cables have drawn much nearer the nations of the earth, and an assembly like this, of the representatives of the different nations, is promotive of good will and peace, while it advances the material welfare of all.

“The United states extend to those from foreign countries who visit us on this occasion a cordial welcome, and now at the Executive Mansion in Washington, in the presence of the assembled representatives of the friendly nations of the world, of the President of the Senate, of the Speaker of the House of Representatives, of the Chief Justice and Associate Justices of the Supreme Court, of a committee from each House of Congress and of the members of my Cabinet, I again, and in their name, congratulate the promoters of the Exhibition upon the auspicious inauguration of an enterprise which promises such far-reaching results.

“With my best wishes for the fulfillment of all its great purposes, I now declare that the World’s Industrial and Cotton Centennial is opened.”

The United Press, through the courtesy of Private Secretary Phillips and his associates, was granted the privilege of placing a telegrapher in the Executive Mansion, from where the report of the ceremonies attending the formal opening of the New Orleans Exposition were telegraphed direct to Chicago, Boston and intermediate stations.

New Orleans, Dec. 16. — The day for the opening of the World’s Industrial and Cotton Centennial Exposition dawned clear and pleasant, and nothing was left undone to make the opening ceremonies brilliant and imposing.

Never before have the streets of the city been so crowded with people as this morning.

Every incoming train is loaded down with visitors, and the bustle and turmoil as they hurry off in search of accommodations reminds one of the scenes during the Centennial at Philadelphia.

Already the hotels are full and great difficulty is experienced in obtaining good quarters.

The city presents a gala appearance. The buildings along the principal streets are profusely decorated.

Flags, banners, bunting of all colors and decorative designs have been tastefully arranged along the house-fronts, while at many of the more prominent street corners triumphal arches have been erected.

The Louisiana State Quarter Coin shows with an artist’s image of the 1884 World’s Industrial and Cotton Centennial. 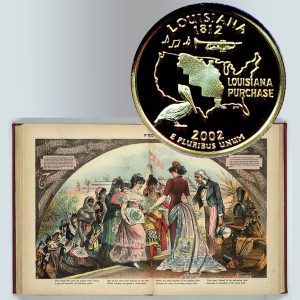