Today, the American Eagle Silver Coin remembers when the poem “A Visit from St. Nicholas” otherwise known as “‘Twas the Night Before Christmas” was first printed on December 23, 1823.

The Autograph Copy of the “Visit from St. Nicholas”

The world-renowned and unsurpassed Christmas poem “A Visit from St. Nicholas” or “‘Twas the Night before Christmas” was first brought to the attention of the public on December 23, 1823, when it appeared anonymously in the Troy Sentinel published at Troy, New York.

The original poem, which is said to have been composed in 1822 by Clement C. Moore as a Christmas present for his two daughters, is not known to be in existence.

Forty years later when Dr. Moore was in his 83rd year, Mr. George H. Moore, Librarian of The New- York Historical Society, suggested that he write an autograph copy of the celebrated poem for the archives of the Society and as is seen by the following letter the request was complied with, and we reproduce the autograph copy of the poem with this article.

Dear Sir: I have the pleasure to inform you that Doctor Clement C. Moore has been so kind as to comply with my request (made at your suggestion) to furnish, for the Archives of our Society, an Autograph Copy of his justly celebrated “Visit from St. Nicholas.”

I now enclose it to you.

I hardly need call your attention to the distinctness and beauty of his hand writing: — very remarkable, considering his advanced age, (he completed his 82d year in July last) and his much impaired eye sight.

These lines were composed for his two daughters, as a Christmas present, about 40 years ago. — They were copied by a relative of Dr. Moore in her Album, from which a copy was made by a friend of hers, from Troy, and, much to the surprise of the Author, were published (for the first time) in a Newspaper of that city.

In an interview that I had yesterday with Dr. Moore, he told me that a portly, rubicund, Dutchman, living in the neighborhood of his father’s country seat, Chelsea, suggested to him the idea of making St. Nicholas the hero of this “Christmas piece” for his children.

The story of this charming Christmas poem runs, that Miss Harriet Butler, daughter of the Reverend David Butler, rector of St. Paul’s Episcopal Church, Troy, New York, was visiting the Moore family in New York City in 1823, when she met with the poem.

Delighted with its rhythm and happy conceptions she requested the privilege of making a copy of it.

On her return to Troy she sent it to the Editor of the Troy Sentinel, Orville L. Holley, who published it in the issue of December 23, 1823 with an introductory paragraph in which he thanked the unknown sender and complimented the unknown author.

It is recorded that the publication of it caused Professor Moore regret and chagrin as he did not wish it to be published, but as it grew in popularity each year by its republication at Christmastide, the desire to know the author became more intense and in 1829 the Troy Sentinel announced that the author of the famous lines belonged “by birth and residence to the City of New York, and that he is a gentleman of more merit as a scholar and a writer than many of more noisy pretentions.”

Although the Editor of the Troy Sentinel intimated that he knew the name of the author of the poem in 1829, it was not until 1838 that its authorship was publicly acknowledged when it appeared in the Troy Budget, December 25th of that year and again in 1844 in a volume of poems entitled “Poems by Clement C. Moore, LL.D.” New York: 1844.

Of the verses printed in this volume the only one that attracted the slightest attention was “A Visit from St. Nicholas,” which the author considered of so little merit and did not want published.

The poem was first illustrated by Myron King, an engraver of Troy, New York, about the year 1830, when a broadside appeared with the now familiar picture of Santa Claus in a sleigh and eight tiny reindeer riding over the housetops.

The picture was printed above the poem on single sheets which were distributed as a ” Carrier’s Address,” a common custom at that time of some newspapers.

A Graduate of Columbia University in 1798 and although educated and prepared for the ministry he never took orders, but became professor of Oriental and Greek literature in the General Theological Seminary to which institution he had made in 1818 a generous donation of the land on which the Seminary buildings now stand.

In 1809 he published a “Hebrew and Greek Lexicon” the first of the kind in America. But he is remembered most familiarly by that simple and beautiful poem which has for generations delighted old and young alike at each Christmastide.

Translated into many languages “A Visit from St. Nicholas” is a monument of enduring fame to its author.

The American Eagle Silver Coin shows with an image of St. Nicholas and his sleigh pulled by eight reindeer. 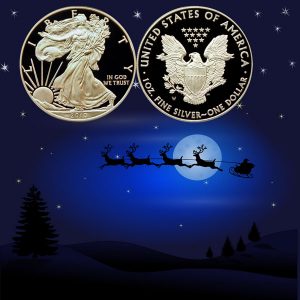