Today, the Georgia State Quarter Coin remembers the cotton bale fires on the shipping steamers at Savannah on November 5 and 6, 1894.

From The Indianapolis Journal newspaper of November 07, 1894:

Phosphorus Used by Incendiaries in  the Holds of Ten Steamers.

Savannah, Ga., Nov. 6. The eighth fire among the cotton shipping broke out at 2 o’clock this morning, on the steamship Whitefield, but the flames were quickly subdued.

Nearly all the tugs and lighters on the river were kept busy during the night.

The chiefs of the fire department and police spent the night on the river watching for fire. Everything is quiet today.

The watch men on all the ships where the fires occurred were arrested today and held without bond, waiting investigation.

At 6 o’clock this morning, the steamer County Down caught fire, but the flames were quickly extinguished.

Ten out of thirteen ships now loading have been on fire.

S. F. Harmon, stevedore in charge of the nonunion men received a threatening letter this morning, which said he would be killed.

In some instances cotton ties took on a phosphorescent glow last night.

It is said that some of the longshoremen who went on strike spread the phosphorus. Union men deny this indignantly.

The matter will be thoroughly investigated. Loss, $50,000.

The Savannah Morning News newspaper of November 08, 1894 provided some insights into the damage to the cotton bales  and the various ships.

Determined to Get Them.

The determination to bring the authors of Monday night’s cotton fires to justice and the belief that greater rewards should be offered, are assuming definite shape.

A meeting of the cotton exchange was held yesterday, at which it was practically decided that $5,000 should be appropriated by that body for the purpose of ferreting out the incendiaries.

The meeting was held at noon, and was largely attended, President Cann presiding. After the purpose of the meeting had been announced by the president the following resolutions were offered by Maj. Karow:

Resolved, That the president designate two members, who, with himself, shall constitute a special committee to take such steps as may be, in their discretion, necessary to protect the interests of this exchange.

Resolved further, That said committee are hereby authorized to expend five thousand ($5,000) dollars, or so much thereof as may be or become necessary in bringing to justice those guilty of the crimes committed in connection with the fires on the ships and wharves during Nov. 5 and 6, and in providing as far as possible such measures as will prevent a recurrence of similar crimes.

Short speeches were made by Maj. Karow, Col. W. W. Gordon, Capt. John Flannery, Mr. L. T. Turner, and Mr. J. F. Minis, discussing the urgency of the situation, and the necessity of taking such immediate and effective action as will give the business world to understand that the incendiaries will be brought to justice, and every means taken to prevent the recurrence of Monday night’s crimes.

As the resolutions involved the expenditure of a considerable amount of money it was thought best that they should lay over until tonight at 6 o’clock, when the annual meeting will be held, which will allow the members of the exchange sufficient time to reconsider the proposed action before definitely passing judgment upon it.

There is no doubt, however, of the passing of the resolutions, as the meeting yesterday represented the general sentiment of the members of the exchange.

The board of trade will meet this morning with practically the same object in view, that of having a larger reward offered for the apprehension and conviction of the criminals.

The meeting will be an important one, and every member is urged to be present. Resolutions will be presented, urging upon the city council the necessity for offering a larger reward for the apprehension of the incendiaries.

President Purse of the board of trade is of the opinion that the whole burden of ferreting out the criminals should be assumed by the city, and that private citizens and corporations should not be called upon to bear any portion of the expense. He will probably advocate this view to-day.

Capt. Purse, Col. Gordon and Maj. Karow expressed the opinions that not only is the cotton business of the city affected by the attacks of the incendiaries, but the city’s entire commerce and prosperity.

“If cotton can be destroyed here,” said Col. Gordon, “there is no reason why business houses and dwellings may not be destroyed in the same manner. It is not only possible that marine insurance rates may be raised, but insurance rates of all classes. The amount of business which may be turned away from the port would mean ruin to hundreds and perhaps thousands of our citizens. If the cotton should be turned to other ports hundreds of men would be thrown out of employment along the wharves and in the railroad yards, houses would become vacant, and every line of business would be affected. With the recent troubles that we have had with the insurance companies all that is needed to bring about an increase in rates is an excuse, and if this business is not stopped it will furnish them with all the excuse they want.”

The work of discharging the cargoes of the vessels which were damaged by the fires was begun yesterday. The surveys upon the vessels have been completed for the time being.

The board of survey was composed of the port wardens, and representatives of the insurance companies, the shipmasters and the shipping agents.

The cotton from the forepeak and No. 3 hold of the Castlegarth was considered discharged. Small amounts only will have to be taken from the other vessels.

Col. Harmon has his hands full with unloading these cargoes, which will later have to be reloaded.

Loading is also going on most of the other vessels in port.

On account of the delay caused by the fires aboard the ships, only about three-fourths of the usual force of laborers were employed yesterday.

None of the ex-union men have been discharged, as it was thought might be done. It is very likely that their companions are keeping close watch upon their actions, however.

The New Orleans cotton fires were generally discussed yesterday, and the opinion expressed that they were attributable to the same source as the fires on the ships in Savannah.

The New Orleans fires occurred on Sunday afternoon. The wharf of the  West India Steamship Company, with 4,000 bales of cotton and other property. were destroyed.

The damage is estimated at about $150,000. All the evidence goes to show that the fire was set from underneath the wharf, and that it was a well planned piece of incendiarism.

An attempt was made to fire 3,000 hales of cotton at the Illinois Central railroad wharf in the same manner, but the blaze was discovered and extinguished with small loss.

The agent of the West India company had stated his intention of employing negro longshoremen to load the vessels of his company, and this is believed to have furnished the incendiaries with the motive.

While the Savannah business men have no desire to see New Orleans injured, several of them stated yesterday that they regarded it as exceedingly fortunate for Savannah that the cotton fires occurred in New Orleans just at this time.

“Misery loves company,” said a prominent business man, “and while we bear New Orleans no ill will, it is fortunate for Savannah that she is not alone in being subjected to the attacks of incendiaries.

With New Orleans, the principal cotton port of the country, in the same boat with Savannah there is little danger of the insurance companies and ship owners endeavoring to shut down on us.

New Orleans appears to be almost in a state of anarchy on account of her labor troubles, and leading business men and steamship agents are threatening to transfer their business to other ports unless the lawlessness is suppressed.

The city government has shown itself to be utterly inefficient, and is charged by the leading newspapers with complicity with the lawbreakers.

Representatives of the marine and domestic insurance companies are expected here this week to ascertain the losses of their companies and investigate the conditions of affairs here.

It is believed that the insurance companies will co-operate with the other interests involved in the work of ferreting out the criminals.

A number of cablegrams have been received here from ship owners and Insurance officials inquiring as to the extent of the damage. They were informed that no exact information could be given yet.

The detectives are at work, but so far as known have not discovered any further clues as to the authors of the fires. No arrests were made yesterday in this connection.

It is believed that the appropriation of $5,000 by the cotton exchange, together with the reward of $500 for each and every person concerned made by the city, will have the effect of bringing some of the best detectives in the country to the scene.

It is with this idea in view that the board of trade will urge the offering of a larger reward by the city.

There is no doubt that the governor will also offer a reward if the matter is properly presented to him, and it has been suggested that the board of trade and cotton exchange at their meetings today memorialize him to this effect.

The Georgia State Quarter Coin shows with an image of the cotton shipping out of Savannah, circa 1890. 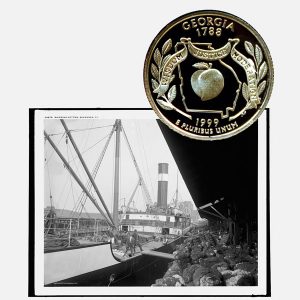