Today, the Alaska State Quarter Coin remembers the eruption that began on June 6, 1912 of the Katmai volcano that became known as Novarupta.

Novarupta (meaning “newly erupted” in Latin) is a volcano that was formed in 1912, located on the Alaska Peninsula in Katmai National Park and Preserve, about 290 miles (470 km) southwest of Anchorage. Formed during the largest volcanic eruption of the 20th century, Novarupta released 30 times the volume of magma of the 1980 eruption of Mount St. Helens.

The eruption of Novarupta within the Aleutian Range began on June 6, 1912, and culminated in a series of violent eruptions from the original Novarupta volcano. Rated a 6 on the Volcanic Explosivity Index, the 60-hour-long eruption expelled 13 to 15 cubic kilometers (3.1 to 3.6 cu mi) of ash, 30 times as much as the 1980 eruption of Mount St. Helens.

The government’s education Bulletin, 1913, Number 36,  included an article Report on the Work of the Bureau of Education for the Natives of Alaska, 1911-12.

The Eruption of Katmai Volcano.

For two days and nights a rain of ashes fell; the darkness was illumined by occasional flashes of lightning; the air was charged with suffocating gases; frequent earthquake shocks were felt.

An extensive region was buried deep in volcanic matter.

The eruption caused no loss of fife, but destroyed the houses of the natives living on the coast adjacent to the volcano and rendered necessary the distribution of food to the people in the stricken district, for the gardens were deeply covered and the salmon streams were choked with ashes.

All employees of the Government in the region affected by the eruption cooperated with the Revenue- Cutter Service in rendering relief.

Capt. K. W. Perry, commanding the revenue cutter Manning, conveyed 98 natives, whose homes had been destroyed, to a site on the Alaska Peninsula which had been selected for their new home.

Here the two teachers from the United States public schools at Seldovia and Tatitlek supervised the erection of the new village, to which the name of Perry was given.

The materials for the construction of 21 houses, to shelter these destitute natives, and the most necessary articles for their use were sent to them from Seattle.

In the Annual Report of the United States Revenue-Cutter Service for fiscal year ending June 30, 1912, one of Captain Perry’s letters detailed the events of the eruption and afterwards:

The SECRETARY OF THE TREASURY, – Washington, D. C.

Sir: I have the honor to submit the following report upon circumstances relative to an eruption of Katmai Volcano, Alaska, beginning June 6, 1912, to effects and conditions resulting therefrom upon Kodiak Island and vicinity, and to duty performed by the Manning in this connection.

On June 6, 1912, the Manning lay moored outside the barge St. James lying at the wharf at St. Paul, Kodiak Island, taking coal.

About 4 p.m., while standing on the dock, I observed a peculiar looking cloud slowly rising to the southward and westward, and remarked that it looked like snow.

Later, distant thunder was heard, and about 5 p.m. I notice light particles of ashes falling.

At 6 o’clock the ashes fell in considerable showers and these gradually increasing.

The cloud bank had spread past the zenith, when I observed another bank to the northward, and the two met about 30° above the northern and eastern horizon.

Thunder and lightning had become frequent at 7 o’clock, very intense at times, and though lacking two hours of sunset, a black night had settled down.

At 9 p. m. Mr. and Mrs. W. J. Erskine and child, Mr. A. C. Erskine, Mr. and Mrs. C. A. Fletcher, and Dr. and Mrs. Silverman came on board, they having become alarmed over the situation, and all were sheltered for the night.

It was impossible, owing to electrical conditions, to use the radio apparatus, consequently no information could be sent out.

This was also found to be true of the Woody Island naval radio station.

Specimens of the deposit were taken at various times, and it was found to consist of dust and fine sand or granules.

At midnight the thunder and lightning diminished, but continued intermittently until the storm (if this term may be used) ceased on the 8th.

Tomorrow Captain Perry’s letter continues with the events of the 7th.

The Alaska State Quarter Coin shows with an image of men clearing volcanic ash that is packed at 10.5 inches deep. 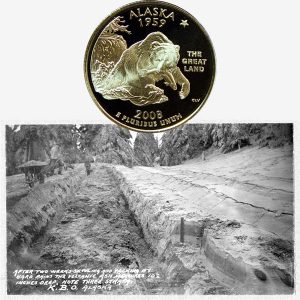