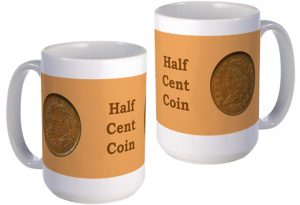 Today, the Half Cent Coin remembers when Mount Tambora erupted 203 years ago.

The volcano’s massive expulsion of ash and debris changed the weather around the world for more than a year.

The island Soembawa is a high volcanic land very thinly populated since the tremendous eruption of the Mount Tambora, April 11th 1815, by which whole towns, villages, population and cattle have been destroyed and as a great deal of the island became thickly covered with ashes, nearly every plant weathered and died and thousands of the inhabitants perished from hunger and misery.

On that dreadful day, April 11th, the English company’s ship, Prince Regent, was off the island Rottie, heard a noise like guns in the night, shortly afterwards the sky became obscured accompanied by a heavy fall of dust at 10 A. M. on the following morning, which continued till the 14th, then 189 miles to the W. ward of the place where it was first seen.

The dust and ashes reached Soerabaya and great quantities fell down at Banjoewangie.

From the Narrative of the Effects of the Eruption from the Tomboro Mountain, in the Island of Sumbawa on the 11th and 12th of April 1815 by Sir Thomas Stamford Raffles, published in 1816:

To preserve an authentic account of the violent and extraordinary Eruption of the Tomboro Mountain on Sumbawa in April last, the Honorable the Lieutenant Governor required from the several Residents of districts on this Island, a statement of the circumstances that occurred within their knowledge, and from their replies the following Narrative is Collected.

It is perhaps incomplete until some further accounts are received of the immediate effects upon the mountain itself—but the progress is sufficiently known to render interesting a present account of a phenomenon which exceeds any one of a similar description on record.

The first explosions were heard on this Island in the evening at the 5th of April; they were noticed in every quarter, and continued at intervals until the following day.

The noise was in the first instance almost universally attributed to distant cannon; so much so that a Detachment of Troops were marched from Djocjokarta, in the expectation that a neighboring Post was attacked, and along; the coast boats were in two instances dispatched in quest of a supposed ship in distress.

On the following morning, however, a slight fall of ashes removed all doubt as to the cause of the sound, and it is worthy of remark, that as the eruption continued, the sound appeared to be so close that in each district it seemed near at hand; it was attributed to an Eruption from the Marapi, the Gunung Kloot or the Gunung Bromo.

From the 6th, the sun became observed: it had every where the appearance of being enveloped in fog, the weather was sultry and the atmosphere close and still; the sun seemed shorn of its rays, and the general stillness and pressure of the atmosphere foreboded an earthquake.

This lasted several days, the explosions continued occasionally, but less violently and less frequently than at first.

Volcanic ashes also began to fall, but in small quantities; and so slightly as to be hardly perceptible in the Western districts.

This appearance of the atmosphere remained with little variation until the 10th of April, and till then it does not appear that the Volcano attracted much observation, or was considered of greater importance than those which have occasionally burst forth in Java.

But on the evening of the 10th the eruptions were heard more loud, and more frequent from Cheribon Eastward; the air became darkened by the quantity of falling ashes, and in several situations, particularly at Solo and Rembang, many said that they felt a tremulous motion of the earth.

It is universally remarked in the more Eastern districts, that the explosions were tremendous, continuing frequently during the 11th and of such violence as to shake the houses perceptibly; an unusually thick darkness was remarked all the following night, and the greater part of the next day.

At Solo, on the 12th, at 4 P. M. objects were not visible at 300 yards distance. At Grissie and other districts more Eastward, it was dark as night the greater part of the 12th April, and this saturated state of the atmosphere lessened as the cloud of ashes passed along and discharged itself on its way.

Thus the ashes, which were eight inches deep at Baniowangie, were but two in depth at Sumanap, and still less in Grissie; and the sun does not seem to have been actually obscured in any district Westward of Samarang.

No description of mine, however, can so well express what happened as the extracts from the reports at the several places, and in presenting those from Grissie, Sumanap and Baniowangie it will be sufficient to observe that the remarks there made are applicable also to all the other districts, only in a lesser degree, as the scene became more distant from the cause of the phenomena.

Extract of a Letter from Grissie.

“I woke in the morning of the 12th, after what seemed to be a very long night, and taking my watch to the lamp found it to be half past eight o’clock, I immediately went out and found a cloud of ashes descending; at 9 o’clock no day light—the layer of ashes on the terrace before my door at the Kradeuan measures one line in thickness; ten A. M.—a faint glimmering of light can now be perceived overhead: half past 10—can distinguish objects 50 yards distant: 11 A. M.—Breakfasted by candlelight, the birds begin to chirrup as at the approach of day: half past 11—can discover the situation of the sun through a thick cloud of ashes; 1 P. M. found the layer of ashes one line and a half thick, and measured in several places with the same results; 3 P. M. the ashes have increased one eighth of a line more; 5 P. M it is now lighter, but still I can neither read nor write without candles. In travelling through the district on the 13th, the appearances were described with very little variation from my account, and I am universally told that no one remembers, nor does their tradition record, so tremendous an eruption—some look upon it as typical of a change, of the re-establishment of the former Government; others account for it in an easy way by reference to the superstitious notions of their legendary tales, and say that the celebrated Nyai Loroh Kidul has been marrying one of her children, on which occasion she has been firing salutes from her supernatural artillery. They call the ashes the dregs of her ammunition.”

Extract of a Letter from Sumanap.

“On the evening of the 10th the explosions became very loud, one in particular shook the Town, and they were excessively quick, resembling a heavy cannonade. Towards evening next day the atmosphere thickened so much, that by 4 o’clock it was necessary to light candles. At about 7 P. M. of the 11th, the tide being about ebb, a rush of water from the Bay occasioned the River to rise four feet, and it subsided again in about 4 minutes; the Bay was much agitated about this time, and was illuminated from a Northerly direction. On the Island of Sahotic, fire was seen distinctly at a short distance to the South-east. The uncommon darkness of this night did not break till 10 and 11 A M. of the 12th, and it could hardly be called daylight all day. Volcanic ashes fell in abundance, and covered the earth about two inches thick, the trees also were loaded with them.”

“At 10 P. M. of the 1st April we heard a noise resembling a cannonade, which lasted at intervals till 9 o’clock next day, it continued at times loud, at others resembling distant thunder—but on the night of the 10th the explosions became truly tremendous, frequently shaking the Earth and Sea violently; towards morning they again slackened, and continued to lessen gradually till the 14th, when they ceased altogether—on the morning of the 3d April, ashes began to fall like fine snow, and in the course of the day they were half an inch deep on the ground; from that time till the 11th the air was constantly impregnated with them, to such a degree that it was unpleasant to stir out of doors—on the morning of the 11th the opposite shore of Bali was completely obscured in a dense cloud, which gradually approached the Java shore and was dreary and terrific—by 1 P. M. candles were necessary, by 4 P, M. it was pitch dark, and so it continued until 2 o’clock of the afternoon of the 12th, ashes continuing to fall abundantly: they were 8 inches in depth at this time. After 2 o’clock it began to clear up, but the sun was not visible till the 14th, and during this time it was extremely cold—the ashes continued to fall, but less violently, and the greatest depth, on the 15th of April, was 9 inches.”

All reports concur in stating that so violent and extensive an eruption has not happened within the memory of the oldest inhabitants, nor within tradition.

The Half Cent Coin shows with a NASA image of Mount Tambora, circa 2009. 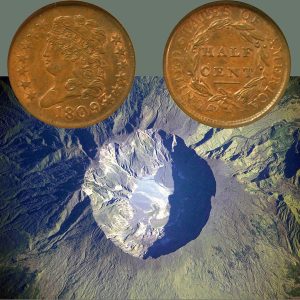