From the January 1947 B & O Magazine and an article titled, “Girl Scouts Will Observe 35th Anniversary:”

Their uniforms have changed from navy blue to khaki to the present grey-green. Hem lengths and hat styles have often changed, too, since the days when Juliette Gordon Low heard about Girl Scouting and decided to bring home the “biggest thing yet.”

But good citizenship remains the keynote of good Girl Scouting. It has been the aim and purpose of the organization since the days of Lord Robert Baden-Powell, originator of the idea of Guiding and Scouting for boys and girls.

In its thirty-fifth year, the theme of Girl Scouting in the United States is “Girl Scouts — Better Citizens Build a Better World.”

Juliette Low became interested in Scouting when she met and talked with Lord Baden-Powell (then Sir Robert Baden-Powell) at a luncheon in England.

She saw the enthusiasm with which the British boys and girls received Scouting and she determined to bring the idea and the program to the attention of American girls.

The twelve girls who gathered in Mrs. Low’s home for tea, many years ago, were pioneers, building new self reliance and adventuring into new fields.

True, they learned to cook and sew and even designed their own uniforms. But they also camped out, went on long hikes, learned first aid and how to handle tools.

They even learned about a new-fangled thing called “aviation.”

When the United States entered the first World War in 1917, the Girl Scouts found that their first aid training could be very useful.

Many of them volunteered for Red Cross work, others sold bonds, and all helped whenever and wherever they could.

So many girls wanted to take active part in helping win the war that they joined the Girl Scouts, and by the end of the war, membership had tripled.

Over the years. Girl Scouting has offered to girls from seven to seventeen a complete well-rounded program of practical and cultural subjects as well as the opportunity to work and play in a democratic organization.

A varied program is offered to all girls. They can take up any phase of activity in the following fields: Nature, Arts and Crafts, Homemaking, Community Life, Health and Safety, International Friendship, Literature and Dramatics, Music and Dancing, Out-of- Doors and Sports and Games.

Since the war, Girl Scouts all over the United States have been studying the languages and customs of their sister Girl Guides and Girl Scouts, and many of them have decided to specialize in International Friendship programs.

Girl Scouts in this country have learned to cook the foods and sing the songs of their sister Scouts around the world, and in every way possible have striven to understand their neighbors as an important step in their plan for world citizenship through Girl Scouting.

There are Girl Scouts in every state and territory of the United States. . . more than a million girls in more than 8,000 communities.

They are part of the World Association of Girl Guides and Girl Scouts (total membership about five million located in most of the civilized countries of the globe).

Yet only seven out of 100 girls in the United States are Girl Scouts.

There are long waiting lists of girls who want to be Girl Scouts, but who need leaders, sponsors and meeting places.

The Girl Scout organization hopes to celebrate its thirty-fifth birthday by giving thousands of American girls a present — their long-awaited chance to become Girl Scouts and proudly wear the uniform and insignia of a movement that is known and honored around the world.

The Girl Scouts Commemorative Silver Dollar Coin shows with an image of girls in their uniforms, circa 1947. 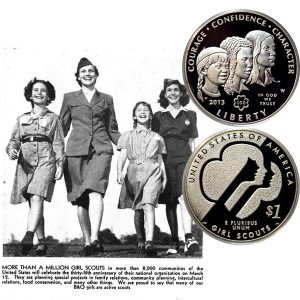