Today, the North Carolina State Quarter Coin remembers when the Royal Governor, Josiah Martin, provided his proclamation on August 8, 1775, against the people’s declaration for independence.

From the North Carolina Society of the Cincinnati by Charles Lukens Davis, published in 1907:

Although the grievances of the American Colonies prior to the American Revolution had been great, resistance to the authority of Great Britain, assuming the form of war, was not begun until 1775, nor was this with any view to severing connection with the mother country. A redress of grievances as British subjects was all that was contemplated by the authorities.

The Scotch-Irish people of the County of Mecklenburg, N. C., were, however, an exception to this general sentiment of loyalty. The leading spirits in that county were ripe for revolution; they were opposed to monarchy, had very little attachment to the mother country, and were ready to throw it off at any favorable opportunity.

They were a highly educated, God-fearing people. They had carefully observed the progress of the controversy with Great Britain and, during the winter of 1774-75, political meetings had frequently been held at Charlotte, the county seat.

That town had been chosen for the location of the Presbyterian College, which the Legislature of North Carolina had chartered, but which the King had disallowed, and it was the centre of culture in that part of the colony.

Early in May, 1775, news was received that the Parliament of Great Britain had declared the colonies in a state of rebellion.

To the good people of Mecklenburg a crisis in American affairs had arrived, and they proposed to declare independence of royal authority. At the instance of Colonel Thomas Polk of the militia, two delegates from each company were called together at Charlotte May 19, 1775, as a representative committee.

Before their consultations were completed, news of the shedding of innocent blood at Lexington, on April 19, arrived, and, filled with patriotic zeal, they resolved to throw off the British connection, thus taking a much bolder stand than either the Colonial or Continental Congress had yet attempted.

The first four resolutions of the Declaration of Independence by the citizens of Mecklenburg County, N. C., prepared by this committee May 20, 1775, are as follows:

“1. Resolved, That whosoever directly or indirectly abetted, or in any way, form or manner, countenanced the dangerous invasion of our rights as claimed by Great Britain, is an enemy of this country — to America — and to the inherent and inalienable rights of man.

“2. Resolved, That we, the citizens of Mecklenburg County, do hereby dissolve the political bands which have connected us with the Mother Country and hereby absolve ourselves from all allegiance to the British Crown, and abjure all political connection, contract or association with that Nation, who have wantonly trampled on our rights and liberties and inhumanly shed the innocent blood of the American patriots at Lexington.

“3. Resolved, That we do hereby declare ourselves a free and independent people; are, and of right ought to be, a sovereign and self-governing association, under the control of no power other than that of our God and the General Government of the Congress; to the maintenance of which independence we solemnly pledge to each other our mutual co-operation, our lives, our fortunes, and our most sacred honor.

“4. Resolved, That as we now acknowledge the existence and control of no law or legal officer, civil or military, within this county, we do hereby ordain and adopt, as a rule of life, each and every one of our former laws — wherein, nevertheless, the crown of Great Britain never can be considered as holding rights, privileges, immunities or authority therein.”

This act is one of the boasted recollections of North Carolina ever to be cherished and never to be forgotten.

The spirit of liberty was abroad throughout all of the colonies.

In North Carolina the Royal Governor, Josiah Martin, armed with despotic powers, was soon thereafter driven to take refuge upon the Cruiser, a ship of war at anchor in the Cape Fear River, where he fulminated his proclamation of August 8, 1775, denouncing the Mecklenburg Declaration of Independence as well as the Provincial Congress which had been formed, for the Royal Governor had abandoned his reins of power, and North Carolina, being thus without a government, except that of its own choice, had chosen delegates to a congress which met at Hillsboro on August 21, 1775.

The people of North Carolina had determined to be free in every respect.

A Provincial Government was formed and a Provincial Congress met at Halifax April 4, 1776. (The fourth meeting of the people in a representative capacity opposed to a Royal Government in North Carolina.)

This Congress divided the Colony into military districts, organized troops for defense, and on motion of Cornelius Harnett of Wilmington, on April 12, 1776, it passed the following resolution:

This act displayed the spirit of North Carolina, and shows that, more than two months before the event was declared by the Continental Congress, she was ready as a State to dissolve the bonds that bound her to the Mother Country.

The North Carolina State Quarter Coin shows with a map of the area, circa 1770. 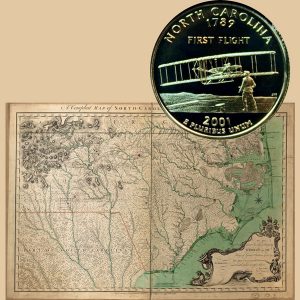