Today, the New York State Quarter Coin remembers the celebration and laying of the cornerstone on May 13, 1890 of the new music hall in the city.

A New Home For Music

Mrs. Carnegie Lays the Corner Stone — All Musicians to be Welcome.

The corner stone of the now music hall at Fifty-seventh street and Seventh avenue was laid yesterday afternoon in the presence of 500 representatives of all the large musical organizations in the city. The exercises opened at 4 :30 o’clock with a fanfare of trumpets.

Morris Reno, President of the Music Hall Company, made the introductory address. Every New York musician, he said, ought to rejoice that New York musical societies were about to have a common home. No kind of music would be excluded.

This common home of all New York musicians would be due to the generosity and public spirit of Andrew Carnegie, whom Mr. Reno then introduced to the audience.

Mr. Carnegie simply said that he was glad to call on Mr. E. Henry Hyde, President of the Philharmonic Society, to tell the friends of music what they might expect from the new hall.

The first things man made after getting shelter over his head, Mr. Hyde said, were a harp and an organ: this is a stringed and a wind instrument. This fact was significant of the inherent desire of every human being for a mode of expression sweeter than language. The musical art, developed from this little beginning had reached today near to perfection. New York was one of the greatest musical cities in the world, and excelled in every variety of music. The kings and queens of song and instrument made pilgrimages to it. All such travelers and all lovers of music here would soon find a hospitable home in the new hall, which had first been planned by Mr. Carnegie, and would be helped to completion by his generosity. The new hall would have all the conveniences as to sight and sound that tend to keep the musical performer and his hearers in harmony. “All success, then, to the Music Hall Association, to Mr. Carnegie, and to Mrs. Carnegie, who is about to lay the corner stone.”

Mrs. Carnegie patted with a trowel the bed of mortar under the suspended stone, and when the stone had settled into place, she gave it three taps with a mason’s mallet.

The band played and everyone shouted “Carnegie.” Mr. Carnegie responded to the call by explaining that he was not the only builder nor the future owner of the new hall, but that many others had contributed proportionately more of their wealth toward erecting it than he. Music, he thought, was kindred to all good things, and therefore, the music hall, when completed, should be open to charitable enterprises. He hoped the hall would, become as celebrated in the history of New York as Faneuil Hall had been in the history of Boston.

The box under the corner stone contained the histories of the Oratorio and Symphony Societies, the by-laws of the Symphony Society, Music Hall Association, Philharmonic Society, programs of numerous city musical organizations and lists of their officers, a copy of “Sulimeth” by Dr. Leopold Damrosch, specimens of circulating coins, copies of yesterday morning’s daily newspapers, and pictures of Andrew Carnegie and Dr. Damrosch.

The new music hall will have a frontage of 175 feet on Seventh avenue and of 150 feet on Fifty-seventh street. Its height will be 121 feet.

The basement extends 26 feet below the curb. The building will contain three large concert rooms. The big hall, with a seating capacity of 3,000 will be on the first floor, and another hall in the basement will seat 1,200 persons.

The room for chamber music will be in the lateral building, an annex on the east side of the main building and will accommodate about 550 persons.

The materials will be speckled brick, granite, and terra cotta.

The main entrance in Fifty-seventh street will be between Aberdeen granite columns and will lead to a vestibule 70 feet wide and 36 feet high.

The New York State Quarter Coin shows with an artist’s portrayal, circa 1890, of the future Carnegie Music Hall. 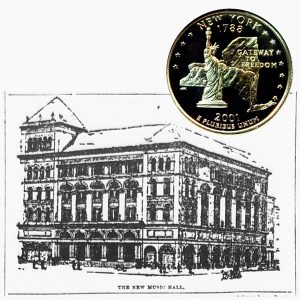