Street Railways, a term including in its larger sense (1) city street car lines (2) inter-urban electric railways (3) elevated or subway rapid transit lines, and (4) trackless trolley lines. All four of these types of transportation stem from a common origin, the first street railway line built in New York City in 1832.

While each type now has its own individual characteristics, there are also certain intermediate types which make it impossible to draw sharp lines of demarcation between the several classifications.

Generally speaking, the city street car line, as the name indicates, is one that runs on tracks in city streets. Its cars are now propelled by electricity almost everywhere except in San Francisco, where cable operation of street cars continues on a few particularly steep grades.

Electrical energy for the motors of the cars is commonly obtained from a single overhead wire with which a trolley pole extending upward from the roof of the car is in continuous contact.

A variation of this method is found at Washington, D. C. and New York City, where the electrical conductor is placed in an underground conduit between the rails, and contact is made by means of a ‘plow’ extending down ward from the underside of the car.

Interurban electric railways are those that run between cities rather than within them. Some operate at high speed over private rights of way; others operate at moderate speeds on tracks laid on a highway.

Between the latter type of interurban and the ordinary street car line there is no clear dividing line.

Most interurban railways obtain electrical energy from an overhead wire although a third rail and sliding contact shoe are used in some places.

Rapid transit lines may be roughly defined as urban electric railways operating trains between stations spaced some distance apart. The tracks of these lines are laid in subways, on elevated structures, or on private rights of way.

In a number of cities, however, street car lines have been placed underground in congested districts and are operated with trains of two or three cars coupled together.

The dividing line between this type of street car operation and rapid transit train operation is somewhat vague.

One general difference between the two is that the street cars obtain electrical energy from overhead wires while typical transit trains get it from a third rail.

In contrast to the other types of transportation, the trackless trolley, or trolley bus, is susceptible of being rather accurately defined. It is a vehicle similar in general design to a gasoline propelled bus, but equipped with one or more electric driving motors which obtain current through a trolley pole in contact with an overhead wire.

This electrical arrangement is similar to that of a street car except that the absence of track necessitates the use of a second wire and a second pole for the return electrical circuit which is completed through the rails for the street car.

History.—The first street railway was an accidental outgrowth of an entirely different idea.

By 1830 steam railroad operation had begun to demonstrate its practicability. Foreseeing a great future for this type of transportation, a group of New York business men, headed by John Mason, president of the Chemical Bank, obtained a charter for the New York & Harlem Railroad, which was to serve as the city section of a continuous line to Albany.

The original permit was for a route from 23rd Street to the Harlem River via Fourth Ave. Permission was later obtained to extend the route down Fourth Ave. and the Bowery as far as Walker Street.

Construction was started early in 1832, and by November a mile of double track had been laid between Prince and 14th Streets. The rails were simply flat strips of iron fastened to stone blocks imbedded in the ground.

The connecting line which the promoters expected to be built down the Hudson River Valley from Albany to the Harlem River had not yet materialized, so the New York & Harlem decided to operate a local service similar to that of the horse-drawn omnibuses on that portion of its line that ran through built-up areas.

John Stephenson, who had attained prominence as a builder of omnibuses, was commissioned to build two cars.

Their design, however, was less like that of the omnibuses than that of the steam railroad cars of the period.

Each vehicle was divided into three compartments, each compartment having an entrance door and seats for ten persons, five facing forward and five backward.

A team of horses furnished the motive power. The driver had a seat on the roof with his feet hanging over the end of the car body.

Operation started in the latter part of 1832. It was so successful that another mile of track was built the next year.

By 1834 the length of the route had grown to four miles, additional cars had been built, and the street railway was giving serious competition to the omnibuses which had previously been the chief reliance of people wishing to travel about the city.

New Orleans in 1834 was the second city to have street railway service. This, too, was the accidental outgrowth of a different plan.

A railroad was started to connect the city with the small suburb of Carrollton, four and a half miles to the west.

Before it was completed the promoters decided to start local operation on a branch line on Magazine Street with a single two-horse car.

Strangely enough, no more street railways were built until the 1850’s, when additional lines were started in Brooklyn and New York.

Baltimore, Cincinnati, Pittsburgh and Chicago were not far behind.

In France, street railway operation began in Paris in 1853. Birkenhead had the first passenger-carrying tramway in England in 1860. London followed shortly after.

An American, George Francis Train, was the builder of the first lines in both places.

The great advantage of the street railway over the horse drawn omnibus was its utilization of iron wheels rolling on iron rails.

Expansion of street railways continued rapidly during the 1860’s and 1870’s.

In 1882 it was announced at the first convention of the American Street Railway Association that there were in the United States at that time some 18,000 street railway cars being pulled by more than 100,000 horses over 3,000 miles of track.

The Liberty Seated Half Dime Coin shows with an artist’s image of the first horse-drawn street-car. 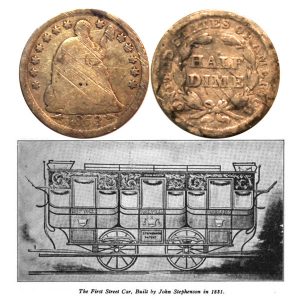