Today, the New York State Quarter Coin remembers when the Metropolitan Opera House opened for its first show on October 22, 1883.

Opening of the Italian Opera Season.

In the new Metropolitan Opera House and the Academy of Music first nights of Italian opera will be celebrated tomorrow. The new structure is sufficiently advanced toward completion to meet all the needs of the operatic performance, the incomplete portions of the building being the assembly rooms and other accessories.

The audience room, vestibules and corridors are finished and the last touch has been given to the decoration of the interior. In surface measurements the audience room is the largest in any opera house in the world, and in construction and ornamentation it is admirable, as will be seen from the appended description.

The Academy of Music has been renovated and brightened, and brilliant audiences will gather in the two temples tomorrow night.

Diagrams on this page of The Tribune show the arrangement of the boxes in the parterre and first tier fo the Metropolitan Opera House owned and occupied by the stockholders of the opera house company. The distribution was made by lot last May, but subsequently changed by private agreement among the box holders.

The Largest Audience Room in the World — The Decorations.

In the Metropolitan Opera House, which is to be thrown open to its chief use tomorrow, there is material for discourse for all manner of critics.

The architectural wiseacres can have their say about the exterior, the material, the disposition of the lines in the audience room, and the thousand and one things which lie within their ken.

The musical critics can speak knowingly of the laws of acoustics, of sound-waves, tonal nodes, resonators, sound reflectors, and pretend to throw off the veil whose outermost ends have only been touched by Chladni and Helmholz and Tyndall.

The art critics — in these aesthetic days a great Committee of the Whole — can dissect the color scheme of the interior decoration and pronounce emphatically and at offhand on the myriad of details on the tier-fronts, proscenium and ceiling.

In fact, a great deal of wisdom on all these points has been expended already, and within fifteen minutes after the orchestra starts the hum of conversation next Monday it may be accepted that they will have been settled in two or three thousand minds at least.

Meanwhile a few will refrain from sitting in judgment until there is a meeting of the conditions which make sound judgment possible; until the pile is finished, the corridors are cleared and the facade stands out complete and free of scaffolds; until within the walls the whole scheme of ornamentation is carried out; until the audience room is tested by a performance in the presence of a gaily dressed audience who will unconsciously plan an extremely important part in the determination of  the theatre’s acoustic properties; until the gas jets are fairly ablaze and the flood of yellow light has mellowed the ground tint into a rich ivory color and called out a roseate blush on the draperies of the boxes.

For the present, a description to be fair ought only to be general; the settlement of details can bide the time when familiarity will have proved whether or not it will be restful and gratifying to the eye to go frequently to the new temple of music, whether or not the ear will receive its delights there without wearisome straining, and whether there is over all the structure the symmetry, the consistency and the correctness of style which lend repose and abiding beauty.

Several things make the new opera house an object of unusual interest. True to a national tendency, this has a bigger audience room than any other opera house in the world, exceeding in dimensions the famous structures of Milan, Naples, Paris, London and Vienna.

It covers a little over a city block and a quarter, filling to the edge of the sidewalks the plot of ground bounded by Broadway, Seventh Ave. and Thirty-ninth and Fortieth Sts.

About one-quarter of this vast surface area is occupied by the audience room; another quarter is devoted to the stage; and barring a small portion of the upper stories in the Broadway end of the structure all the rest of the space from cellar to roof is given up to the accessories, to vestibules, corridors, staircases, assembly rooms, parlors, foyer, rigging loft, artists’ dressing-rooms, scene rooms, green rooms, band rooms, property rooms, draper rooms, rehearsal rooms, carpenter shop, and offices for the management.

A few bachelors’ apartments will be put in the upper floors of the unfinished Broadway portion after all the requirements of the operatic season have been met.

It is hoped that this portion of the building will be finished by New Year’s Day.

The audience on Monday will find incompleteness only outside the audience-room.

Vestibules and corridors will be complete and the last touch will have been given to the theatre, but hte foyer will not be finished, and brick walls will bar the way to the suite of assembly rooms which will occupy the corner buildings.

The New York State Quarter Coin shows with the diagrams of the boxes for the first operatic season at the newly built Metropolitan Opera House in 1883. 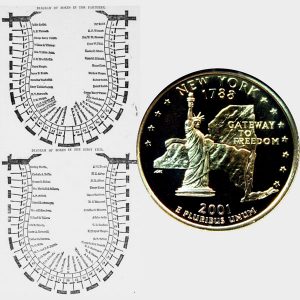