Today, the Pennsylvania State Quarter Coin remembers when the first train traveled between Pittsburgh and Philadelphia on December 10, 1851.

From the History of Cambria County, Pennsylvania by Henry Wilson Storey, published in 1907:

The Pennsylvania Railroad Company was incorporated by an Act of Assembly dated April 13, 1846. Among the commissioners named in the act to carry it into effect were John Linton, William A. Smith, John Matthews, John Fenlon, Peter Levergood, Edward Shoemaker, Stephen Lloyd and Richard Lewis from Cambria county.

Whenever they succeeded in getting subscriptions of $7,500,000 to the capital stock, and the sum of five dollars paid on each of the 150,000 shares at $50 par value, the governor was authorized to issue the charter.

There was great difficulty in raising that much money. The company was permitted to increase the capital to $10,000,000, for additional improvements.

It was constructed in sections. On September 17, 1850, it was completed from Harrisburg to the “Mountain House,” a mile east of Hollidaysburg, where it connected with the Portage railroad over the mountains to Johnstown.

In August, 1851, a section of twenty-one miles west from Johnstown was completed, and with the portion constructed east from Pittsburgh, left a gap of twenty-eight miles, which was closed on December 10, 1852, when cars were run through from Pittsburgh to Philadelphia, by using a part of the Portage road.

Until 1851 through traffic was transferred from the Pennsylvania railroad to the Portage road at Johnstown, but after the section to Lockport was completed that year the transfer was made at that place.

Passengers and freight were transferred by teams from Beatty’s station to Lockport. The road from Conemaugh to South Fork was used by the Pennsylvania railroad, and the Portage railroad, which were connected by a bridge constructed across the Conemaugh river just west of the overhead bridge at that place.

The transfers of cars were made at the basin. The old bridge was taken down about 1875.

The old Pennsylvania railroad tunnel at Gallitzin was commenced October 14, 1851, by Thomas Seabrooke, the principal engineer.

It is 3,612 feet in length, and was used as a double track roadway until 1898, when the cars and engines being made too large to allow for two tracks, the Portage tunnel, which was completed about 1855, was relined and two tracks laid through it for the eastbound traffic.

Its length is 1,630 feet. The old tunnel was used for the westbound travel until the new single line tunnel was completed in May, 1904, by W. H. Brown, chief engineer; C. S. d’Invilliers, engineer of construction, and P. F. Brendlinger, the contractor.

The first tunnel was completed early in 1854, and on February 15 of that year the first train was run through from Pittsburgh to Philadelphia over its own line, with the late Thomas Clark of Pittsburgh, formerly of Johnstown, as the conductor.

George W. Munson was the first agent at Johnstown. The freight and passenger station stood near the location of the old freight station until sometime during the war, when the passenger depot was moved to its present site.

When the road opened for through all-rail business on February 15, 1854, Mr. Munson was also the Adams Express agent.

In December of that year there were but two passenger trains each way daily, except Sunday, when there was but one train, and in 1856 the trains each way had been increased to three. The fare at that time was two and a half cents per mile, costing $1 to Altoona; $4.25 to Harrisburg; $6.95 to Philadelphia, and $1.95 to Pittsburgh.

There were but two daily mails each way, except on Sunday, when there was none. The mail to Somerset was tri weekly, and to Berlin but once a week.

In March, 1857, there was a reduction of passenger trains to two each way, which continued until the following February, when the Johnstown accommodation was added, which made the run to Pittsburgh in four hours.

In August, 1859, there were three through trains and two locals each way.

It is probable the most remarkable accident ever occurring on any railroad happened on the Pennsylvania road, about three-fourths of a mile west of Mineral Point, and about six miles east of Johnstown, about 2:30 in the morning of February 23, 1907.

The train was the Chicago Limited, commonly called the “Flyer,” in charge of J. D. Smail, engineman, and M. W. Forbes, conductor, and which makes the run between New York and Chicago in eighteen hours.

It consisted of three Pullman vestibuled sleeping cars and a combination baggage car, and was making its usual speed of fifty-three miles per hour down the mountain.

Suddenly the cars left the track and ran along the rails for about a hundred yards, when the three sleeping cars slid over a forty-foot embankment with a slope of about a foot and a half to one, on to the ice in the Little Conemaugh river.

There were fifty-four passengers in the cars, and the crew, and nobody was killed. One or two passengers were seriously injured, but not fatally, and several were bruised, but the marvelous feature is that it did not cause a single death.

The weather was intensely cold; the ground was frozen so that the cars skidded over it, and the ice was so thick the cars did not break it.

The general belief is that the accident was caused by the dropping of a brake rigging on the tender, which threw the ears off the track although the engine did not leave the rails.

The Pennsylvania State Quarter Coin shows with an artist’s image of a train near Philadelphia with the Schuylkill river flowing behind, circa mid-1850s. 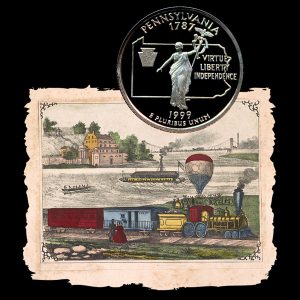