Today, the Silver Trime Three-Cent Coin remembers an humorous article from 168 years ago about a failed serenade.

From The Minnesotian newspaper out of St. Paul, Minnesota Territory, December 20, 1851:

Serenading a young lady. —A friend tells the following:

In my young days, I was extravagantly fond of attending parties, and was somewhat celebrated for playing the flute. Hence it was generally expected, when an invitation was extended, that my flute would accompany me.

I visited a splendid party one evening, and was called upon to favor the company with a tune on the flute. I, of course, immediately complied with the request.

The company appeared to be delighted, but more particularly so was a young lady, who raised her hands and exclaimed that it was beautiful, delightful, &c.

l, of course, was highly flattered, and immediately formed a resolution to serenade the young lady on the following night.

I started the next night in company with several young friends, and arrived as I supposed, at the lady’s residence, but made a glorious mistake by getting under the window of an old Quaker.

“Now boys,” said I, “behold the sentimentality of this young lady the moment I strike up, the ‘Last Rose of Summer.'”

I struck up, the window remained closed—the boys smiled.

“Oh,” said I, “that is nothing, it would not be in good taste to raise the window on the first air.”

I next struck up “Old Robin Gray.”  Still the window remained closed. The boys snickered and I felt somewhat flat.

I struck up again— “My Love is like the Red, Red Rose.” Still there was no demonstration.

We struck up, and as we finished the last line the window was raised.

“That’s the ticket, boys, I knew we could fetch her.”

But instead of the beautiful young lady, it turned out to be the old Quaker, in his night cap and dressing gown.

“Friend,” said he, “thee was singing of thy home—and if I recollect right, thee said there was no place like home; if that is true, why don’t thee go to thy home. Thee is not wanted here—thee; nor none of thy party. — Farewell.”

We and our hats went home!

The Silver Trime Three-Cent Coin shows with an image of a more successful serenade, circa 1880. 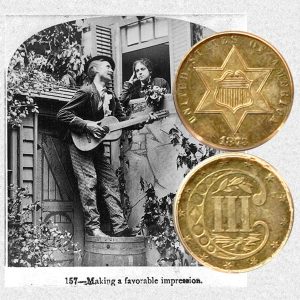