Today, the Ohio State Quarter Coin tells the story of The Planet Mars written by George Fitch and printed in a Ohio newspaper, the Youngstown Vindicator, on February 6, 1915.

Mars is a strawberry blonde star with a 13,000 mile waist line, which inhabits the circumambient ether about 50,000,000 miles outside the right of way of the earth.

Mars belongs to the celebrated solar system and is a planet like our own residence, but not nearly as comfortable for living purposes. It is only one-eighth the size of the earth which would make it extremely crowded if it had any citizens like John D. Rockefeller, J.P. Morgan or Kaiser Bill.

It also has an extremely thin atmosphere and a winter ten months long. During these winters the mercury falls to 100 or more below, while in the summer owing to the absence of clouds, the temperature rises until the Martian thermometers have to be fitted with blow-off valves.

Owing to these facts and also to the fact that Mars at its nearest approach to the earth is 35,000,000 miles away, no determined effort has ever been made to emigrate thither from this planet, even by such notoriously discontented residents as George Bernard Shaw and Emma Goldman.

Astronomers have always been greatly interested in Mars because of its nearness. Anything under 100,000,000 miles is near to an astronomer, and he loves nothing better than to snuggle up to within 250,000miles of the moon on a clear night and spoon with it.

Owing to the vast improvement in the common, single-barreled, 100-centimeter telescope, very interesting discoveries have been made upon Mars, particularly in the canal line.

These canals are straight lines which stretch across the planet in all directions and make it look like a railroad map drawn by the general passenger agent.

These lines have always puzzled astronomers. They do not understand why the people of Mars, who must be kept extremely busy merely keeping warm and cool should waste their time digging double-tracked canals 25 miles wide all over the planet.

However, the present war should furnish an explanation. The supposed canals are merely the trenches of the opposing armies.

Much speculation regarding the inhabitants of Mars has been made, and astronomers are constantly on the lookout for signals.

Thus far there is no indication that any sound from this earth has ever reached our brother planet, even when Tillman was at his height in the United States Senate.

The Ohio State Quarter Coin accompanies this tongue-in-cheek article from 1915 with a background of a Martian fellow dressed in pink arriving in front of Congressmen in Washington, DC, circa 1902. 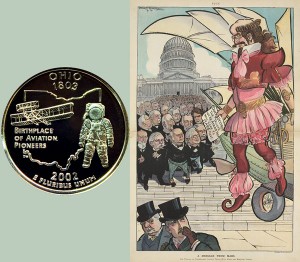