Today, the New York State Quarter Coin remembers the celebration of the Croton Aqueduct on October 14, 1842, with a rather flowery description of the day.

Celebration of the Introduction of the Croton Water into the City of New York.

Yesterday was the proudest day for the city of New York, that its inhabitants have seen since the discovery of this part of the world by Hendrick Hudson, and as we believe since the last anchored isle of Manhattan emerged from the general deluge!

It was the day of the Great Croton Celebration. For several days previous, thousands of strangers had been pouring into the city from all parts of the country, to see and join in the procession, until there must have been at least 200,000 strangers in the city, making an aggregate with the resident inhabitants of half a million of souls congregated in our streets.

Nothing could exceed the enthusiasm or the excitement occasioned by this glorious event. The streets were cleaned, most admirably for once, thanks to the Seventeenth street inspectors, of whom our 2d ward, rosy-faced Jack Hill, was the Chairman.

The Superintendant of Hacks also did his duty by clearing the streets in the line of the procession of all the carriages, hacks, carts, and other vehicles; and everything was done that prudence and energy could accomplish to make the whole pass off without interruption, accident, or annoyance.

The day was beautifully fine; the sun rose in unclouded splendor and majesty. Scarce a cloud bedimmed the blue vault of Heaven, and it seemed, (if in the description of sublunary matters we may use the expression,) that the Supreme Ruler of the Universe looked down with delight upon this celebration of an event, fraught with so many blessings to the Queen City of the greatest nation upon earth!

The celebration commenced at daylight with the roar of one hundred cannon, and all the fountains in the city immediately began to send forth the limpid stream of the Croton. Soon after this, the joyous bells from a hundred steeples pealed forth their merry notes to usher in the subsequent scenes.

At and before this moment, over half a million of souls leaped simultaneously from their slumbers and their beds, and dressed themselves as for a gladsome gala day — a general jubilee.

The necessary arrangements of breakfast, indispensable as they were, were soon dispatched. And in a very few minutes afterwards thousands of human beings wended their way into the great streets and avenues through which the procession was to pass.

Long before nine o’clock all the windows, houses, sidewalks, balconies, roofs, awning posts lamp posts, ridges, hydrants, chimneys, railings, trees and every conceivable spot on which a foot could touch was occupied by anxious spectators, each “straining for the start,” which did not commence for two hours afterwards.

The streets in every direction leading to the route of the procession was crammed with the living, moving multitude. Old men of 90, tottering side by side with feeble infancy, mingled up with females of every age, rank condition and complexion, were in the mighty throng.

Four-score and ten forgot its infirmity, and woman disremembered the delicacy of her sex, to catch even a passing glimpse at the procession.

Beginning at the Battery, which was crowded with gazers throughout the extent of the line, nearly seven miles, every window and housetop was crowded, mostly with lovely female faces.

From the Bowling Green to Union Square, it was nothing but a perfect sea of heads, independent of the procession itself, and the blaze of beauty up Broadway was absolutely enchanting.

We really think we speak within bounds when we say that 50,000 women were spectators for this space alone.

The upper part of the city early made preparation for the expected pageant. Grand street, in particular, through which the procession was to pass, was thoroughly swept clean.

All the hydrants were playing, creating bubbling brooks down either gutter, from which the water was spread by men stationed for that purpose over the whole surface of the street, allaying the dust, and giving it a clear and cool appearance.

The houses, being favorably situated to view the passing scene, were in order betimes. The open windows were filled with beauty and fashion, in their best array of “bibs and tuckers,” and smiling faces.

Pipes from the hydrants, at alternate corners, formed small but beautiful jets d’eau.

At the corner of the Bowery a beautiful fountain sent the leaping waters sparkling towards heaven. In all directions and in all forms the limped waters met the eyes.

The star of temperance seemed indeed to have illuminated, and the blessing of abundant water duly appreciated.

The Bowery to Union square, presented similar appearances. That lovely spot was open to the public, and filled with “the gay, the young, and the fair,” as well as with the aged and the ugly.

The splendid mansions which surround this ornament to the city, contained myriads of military faces expecting the march of the water worshippers who were to pass them in review.

At 10 minutes before noon the distant roll of the drum was heard, when the fountain in the centre of the Park began to play. Its column of sparkling water was thrown fifty feet into the air, and the multitude of smaller pipes that encircled the basin, threw their minor streams inwards, as if bowing in deference to the superior vigor of the main jet.

At 12 M. the head of the column reached the square, when the glorious sun bursting from the clouds which encircled him, illuminated the scene. His rays, reflected from the sparkling waters of the fountain, covered it with a beautiful rainbow.

On they came, that glorious pageant, company after company, battalion succeeding battalion, division after division, countermarching the square as they came up Broadway and returned down the Bowery.

The military were succeeded by the civic officers, among whom the busy hum distinguished his Excellency, the Governor of New York, with his suite.

A roar of laughter burst from rank and file, from street, square, and houses, echoed back from heaven, as a barouche passed the house of S. B. Ruggles, Esq., and a little red headed man stood up in it, and raised his hat, which salute was returned by a bouncing colored lady dressed in white, and surrounded by splendid cushions, on which she leaned forward from the window, surrounded by a bevy of pale but beautiful damsels, not unlike a queen of Sheba amid her Georgian slaves.

The lengthening stream of the bold, the brave, the useful, the philanthropic and the scientific rolled on. In two hours and a half from the time the foremost troops had reached Union Square, the last man in the procession was retiring in the distance down the Bowery.

All down the Bowery the galaxy of beauty was bewitching. In Grand street, the roofs of houses, awning posts, lamp posts, and even the stalls of the Grand street market, were covered with spectators.

The market stalls never had such a precious freight on them before, and the street was in admirable order.

But the crowning scene of the clay was East Broadway. Here the loveliness of the ladies surpassed belief; the elegance and neatness of dress, beauty of form and feature, of the belles of East Broadway, will long be remembered by those who saw them.

Again, down Chatham street, there was nothing to be seen but human faces; the houses were literally hid by them; and in the neighborhood of the Park, the scene beggars description.

In the broad space at the head of Nassau street, Park Row, Chambers street, and all the adjoining streets, there was nothing but a dense mass of human beings.

And the Park in every part was crammed full of people, all happy, well dressed, sober, and determined to be delighted.

The procession we shall now describe. It was near seven miles in length; and this can be proved by all. For when the head of the line reached the corner of Chambers street in Chatham street, on its return, the Franklin Temperance Society was crossing Chambers street in Broadway.

The Fire Department alone occupied one hour and 17 minutes;  but they were only two abreast, with the exception of the Southwark Company, who were four abreast, and looked superbly, as did Nos. 5, 14, the Northern Liberties, and in fact all the fire companies.

When the tail end of the Fire Department. No. 50, rested at Vauxhall Gardens, the head of that division had just reached Chatham square, thus occupying a space of two miles and a quarter; and on a moderate calculation, they had 4000 men in their division.

Estimating from this data, and remembering that the military were sometimes 12 abreast, there must have been about 20,000 persons in this procession.

They looked and marched most admirably.

The close of the day was distinguished by an illumination of the Astor House, the Park Theatre, and the Howard House. The Astor House was most beautifully decorated during the day, with festoons of tri-colored bunting, by Voorhis, of Maiden Lane; and in the evening, 61 windows were lighted up with732 candles, (122 lbs.)

And what is astonishing, the whole of these were lighted up in twenty-seven seconds, through the admirable arrangements of Messrs. Stetson & Coleman.

A beautiful wreath of dahlias ornamented the portico, which was presented by Mr. Thorburn, and in which there were 1140 dahlias.

This glorious day closed with a grand ball at Washington Hall, and all passed off without a single accident.

After all was over, and about ten at night, the rain descended in torrents, and the streets were deserted; forming a striking contrast to the scenes of daylight.

The New York State Quarter Coin shows with an image of the Croton dam and the beginning of the aqueduct, circa 1843. 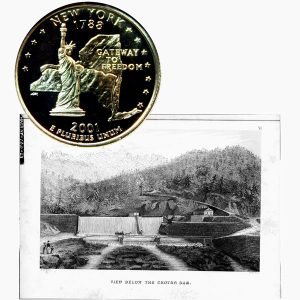