Today, the Half Cent Coin remembers when the brothers Salisbury produced the first newspaper in Buffalo on October 3, 1811 then went on to attack the “e” at the end of their adopted city’s name.

From An Authentic and Comprehensive History of Buffalo, Volume II, by William Ketchum, published in 1864:

The first newspaper published in Buffalo was the “Buffalo Gazette,” issued on the 3d day of October, 1811, by the brothers Smith H., and Hezekiah A. Salisbury, who came here for the purpose, from Canandaigua, where they had learned the printing business of the late James D. Bemis, in the office of the “Ontario Repository.”

The “Gazette” was the only paper then published in Western New York, excepting one at Batavia, established in 1807.

They likewise opened a bookstore, being the only one in the State west of Canandaigua. S. H. Salisbury, in 1818, retired from the “Gazette,” and it was continued by H. A. Salisbury, under the title of the “Buffalo Patriot,” until 1836, when he disposed of it, and it has since been published as the weekly issue of the “Buffalo Daily Commercial Advertiser.”

Hitherto Buffalo had been spelled with an e, but soon after the establishment of the first newspaper in Buffalo in 1811, Mr. Salisbury, the editor, took up the subject and in a series of rather humorous articles, showed the absurdity of using the superfluous e on the end of that name.

This is one method he took.

The following record of a hypothetical lawsuit is copied:

“This was an action brought before the Court for the purloining the fifth letter of the alphabet, and clapping it on the end of the name Buffalo.

“The Plaintiff contended that he had both reason and right on his side, and that he could not only prove from high authority that the Defendant was guilty not only of a gross dereliction in thus adding the silent, superfluous e to the high sounding Buffalo, but that he had in his filchings, taken one of the official functionaries, one of the most important members of the alphabet, one in fact introduced into all circles, parties, societies and even into electioneering caucuses, and placed him where his usefulness would be entirely abridged, where he must raise his final head in silence, where he would be known only in name.

“The Plaintiff now proceeded after some pertinent remarks to the Court, in which he pointed out the enormity of the offence of General Opinion, to call his witnesses.

“Several Dictionaries were brought forth and examined, who testified from Doctor Johnson down to Noah Webster, that there was no such character as e, in the town of BUFFALO.

“General Use who was subpoenaed by both parties was qualified.

“He said he did not hesitate to state to the Court that he had been in the constant practice of dating his notes, receipts and memoranda with ‘Buffaloe,’ but that since the establishment of a public paper, he should accommodate it to his conscience to cut it short and dock off the final e.

“The Plaintiff then said, that if necessary he could produce to the Court a cloud of certificates which would fully and unequivocally convince and convict their minds, but that he would not insult their Honors by supposing that any further evidence was wanting and should therefore rest his case.”

These efforts of Mr. Salisbury were successful and the superfluous e was gradually dropped, and the improved method of spelling Buffalo without an e prevailed.

The Half Cent Coin shows with an image of the first page of an early Buffalo Gazette newspaper after the “e” had been dropped. 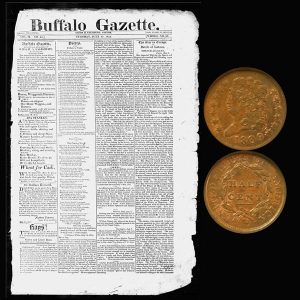