From the Scots Magazine of November 1778:

America.  The following authentic account, letter, speech, and reply, have been published.

“Philadelphia, Aug. 11. 1778. Last Thursday being the day appointed by Congress for the audience of the Sieur Gerard, minister plenipotentiary from his Most Christian Majesty, that minister received audience accordingly.

In a few minutes the minister and the two delegates entered the coach, Mr. Lee placing himself at the minister’s left hand on the back seat, Mr. Adams occupying the front-seat; the minister’s chariot being behind received his secretary.

The carriages being arrived at the state-house in this city, the two members of congress, placing themselves at the minister’s left hand, a little before one o’clock, introduced him to his chair in the congress chamber; the President and Congress sitting.

The minister being seated, he gave his credentials into the hands of his secretary; who advanced, and delivered them to the President. The secretary of congress then read, and translated them; which being done, Mr. Lee announced the minister to the President and Congress.

In a moment, the minister rose, and made a speech to Congress, they sitting. The speech being finished, the minister sat down, and giving a copy of his speech to his secretary, he presented it to the President.

The President and the Congress then rose, and the President pronounced their answer to the speech, the Minister standing.

The answer being ended, the whole were again seated, and the President giving a copy of the answer to the secretary of Congress, he presented it to the minister.

The audience being over, the congress and the minister, at a proper hour, repaired to an entertainment by Congress given to the minister; at which were present by invitation, several foreigners of distinction and gentlemen of public character.

The entertainment was conducted with a decorum suited to the occasion; and gave perfect satisfaction to the whole company.

According to order, the Honorable the Sieur Gerard being introduced to an audience by the two members for that purpose appointed, and being seated in his chair, his secretary delivered to the President a letter from his Most Christian Majesty, which was read in the words following.

The treaties which we have signed with you, in consequence of the proposals your commissioners made to us in your behalf, are a certain assurance of our affection for the United States in general, and for each of them in particular, as well as of the interest we take, and constantly shall take, in their happiness and prosperity.

It is to convince you more particularly of this, that we have nominated the Sieur Gerard, secretary of our council of state, to reside among you in the quality of our minister plenipotentiary.

He is the better acquainted with our sentiments toward you, and the more capable of testifying the same to you, as he was entrusted on our part to negotiate with your commissioners, and signed with them the treaties which cement our union.

We pray you to give full credit to all he shall communicate to you from us, more especially when he shall assure you of our affection and constant friendship for you.

We pray God, Very Dear Great Friends and Allies, to have you in his holy keeping.

Your good friend and ally, Louis.

Versailles, March 28. 1778,
Gravier de Vergennes.
To our Very Dear Great Friends the President and Members of the General Congress of North America.”

The minister was then announced to the President and the House; where upon he arose, and addressed Congress in a speech; which when he had finished, his secretary delivered the same in writing to the President, as follows.

The connection formed by the King, my master, with the United States of America, is so agreeable to him, that he could no longer delay sending me to reside among you for the purpose of cementing it.

It will give his Majesty great satisfaction to learn, that the sentiments which have shone forth on this occasion, justify that confidence with which he hath been inspired by the zeal and character of the commissioners of the United States in France, the wisdom and fortitude which have directed the resolutions of Congress, and the courage and perseverance of the people they represent; a confidence which you know, Gentlemen, has been the basis of that truly amicable and disinterested system on which he hath treated with the United States.

It is not his Majesty’s fault that the engagements he hath entered into did not establish your independence and repose without the further effusion of blood, and without aggravating the calamities of mankind, whose happiness it is his highest ambition to promote and secure.

But since the hostile measures and designs of the common enemy have given to engagements purely eventual, an immediate, positive, permanent, and indissoluble force, it is the opinion of the King my master, that the allies should turn their whole attention to fulfill those engagements in the manner most useful to the common cause, and best calculated to obtain that peace which is the object of the alliance.

It is upon this principle his Majesty hath hastened to send you a powerful assistance, which you owe only to his friendship, to the sincere regard he has for everything which relates to the advantage of the United States, and to his desire of contributing with efficacy to establish your repose and prosperity upon an honorable and solid foundation.

And, further, it is his expectation, that the principles which may be adopted by the respective governments, will tend to strengthen those bonds of union which have originated in the mutual interest of the two nations.

The principal object of my instructions is to connect the interests of France with those of the United States.

I flatter myself, Gentlemen, that my past conduct in the affairs which concern them, hath already convinced you of the determination I feel to endeavor to obey my instructions in such a manner as to deserve the confidence of Congress, the friendship of its members, and the esteem of the citizens of America.

To which the President was pleased to return the following answer.

The treaties between his Most Christian Majesty and the United States of America, so fully demonstrate his wisdom and his magnanimity as to command the reverence of all nations.

The virtuous citizens of America in particular can never forget his beneficent attention to their violated rights; nor cease to acknowledge the hand of a gracious Providence in raising them up so powerful and illustrious a friend.

It is the hope and opinion of Congress, that the confidence his Majesty reposes in the firmness of these States, will receive additional strength from every day’s experience.

This assembly are convinced, Sir, that had it rested solely with the Most Christian King, not only the independence of these States would have been universally acknowledged, but their tranquility fully established.

We lament that lust of domination which gave birth to the present war, and hath prolonged and extended the miseries of mankind.

We ardently wish to sheath the sword, and spare the farther effusion of blood: but we are determined, by every means in our power, to fulfill those eventual engagements which have acquired positive and permanent force from the hostile designs and measures of the common enemy.

Congress have reason to believe, that the assistance so wisely and generously sent, will bring Great Britain to a sense of justice and moderation, promote the common interests of France and America, and secure peace and tranquility on the most firm and honorable foundation.

Neither can it be doubted, that those who administer the powers of government within the several states of this union, will cement that connection with the subjects of France, the beneficial effects of which have already been so sensibly felt.

Sir, from the experience we have had of your exertions to promote the true interests of our country as well as your own, it is with the highest satisfaction Congress receive, as the first minister from his Most Christian Majesty, a gentleman whose past conduct affords a happy presage, that he will merit the confidence of this body, the friendship of it members, and the esteem of the citizens of America.

The secretary of Congress then delivered to the minister a copy of the foregoing reply, signed as above : where upon the minister withdrew, and was conducted home in the manner in which he was brought to the house.

The Congress Commemorative Silver Dollar Coin shows with an artist’s portrayal of the Sieur Gerard. 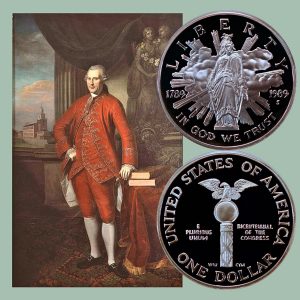