From the Boston Newspapers to 1820 compiled by the American Antiquarian Society, published in 1915:

Established Aug. 7, 1721, published by: James Franklin with the title of “The New-England Courant.”

“On Monday last the 7th Currant came forth a Third News-Paper in this Town, Entituled, The New-England Courant.”

James Franklin in his newspaper gave frequent offense to the General Court, which ordered both his imprisonment and the suppression of his paper.

At length, with the issue of Feb. 11, 1723, the paper was published under the name of his brother Benjamin Franklin.

In his “Autobiography,” Benjamin Franklin records that the paper went on under his name for “several months” and it was in October, 1723, that he left Boston.

His name, however, was continued in the imprint until the last issue located, that of June 4, 1726.

From The Collection of Franklin Imprints in the Museum of the Curtis Publishing Company,  compiled by William J. Campbell, published in 1918:

Colophon: Boston: Printed and sold by Benjamin Franklin in Queen Street, where advertisements are taken in.

The New-England Courant was started in 1721 by James Franklin, elder brother of Benjamin, No. 1 appearing August 7th, 1721.

No. 35, April 2nd, 1722, was the first number containing anything known to have been written by Benjamin, who was a frequent contributor thereafter.

In the early part of the year 1723 James got into trouble with the Massachusetts authorities on account of publishing articles of which they did not approve, and was ordered not to publish the Courant or any other paper.

He therefore cancelled Benjamin’s indentures and made a new contract, nominally transferring the paper to him.

On February 11th, 1723, No. 80 of the Courant appeared with Benjamin Franklin’s name as printer.

This is the first appearance on any publication of his name as printer or publisher.

He was then only seventeen years of age.

He saw through the press every issue after No. 80 until he left Boston in October, 1723.

No. 121, November 25th, 1723, appeared with his name as publisher although he was then in Philadelphia, and this continued well into 1726, including No. 252, June 4th, the latest known issue of the paper.

From The Magazine of History, with Notes and Queries, published in 1923:

This is a hitherto undescribed and unrecorded broadside of excessive rarity; a product of the press of James Franklin, printed in the same form as used by him in the New England Courant, and written in a satirical manner, to advertise it by stimulating curiosity.

This skit antedates by two months the earliest hitherto recorded imprint of James Franklin with which Benjamin’s name has been connected — the printed broadside “Catalogue of Curious and Valuable Books to be sold by Auction . . . Boston, on Monday, the twenty -sixth Day of this Instant, October, 1719;” a copy of which is listed in William J. Campbell’s “Catalogue of the Curtis collection of Franklin Imprints.”

In 1717 James began business as a printer; the next year Benjamin, twelve years old, was apprenticed to him under contract.

He remained until October, 1723, when frequent quarrels led him to fly to New York.

He tells us that during these five years he ‘took a fancy to poetry;’ this James encouraged, “thinking it might turn to account,” and even put him “to composing occasional ballads.”

Of these, which were probably broadsides, no copy is known to exist.

The first Courant was issued by James Franklin, August 7, 1721, just three days before the appearance of the above skit.

At this time the future “Poor Richard” had been an apprentice for three years; and though there is no proof that he was the author of the skit, it is not unlikely that he was connected with its origin; and that he certainly had some connection with its actual printing is evident by his three years’ service, and that he had already contributed some satirical and semi-political items under the sanction of James who “when they were printed” sent him “about town to sell them.”

From the Universal Encyclopedia, Volume VIII, published in 1900:

On Dec. 22, 1719, the day after the Gazette appeared, the initial paper in Philadelphia, The American Weekly Mercury, was issued by Andrew Bradford, a son of the first printer in Pennsylvania.

A paper that attracted more attention was The New England Courant, established by James Franklin Aug. 7, 1721.

Benjamin Franklin began his career as a printer’s apprentice on this paper.

The Courant created a sensation, and its publisher was soon in difficulty.

First it had a wordy war with The News-Letter. Then James Franklin had a good deal of trouble with the clergy, especially with Cotton and Increase Mather, and finally the journalist and the Government officials had their differences.

The communications in the Courant produced so much talk and scandal in the quiet town of Boston that its publisher was forbidden to issue his paper except, under very arbitrary restrictions, and for attempting to evade these he was thrown into prison.

On Feb. 11, 1722, Benjamin Franklin, then only sixteen years of age, was placed in charge as editor and publisher, and he remained for several months in this position.

There continued to be the same independent spirit in the management of the paper, and its troubles finally induced James Franklin to abandon its publication, he went to Newport, R. I., where he established the Gazette in 1732.

The Franklin Silver Half Dollar Coin shows with an artist’s image of an early printing press. 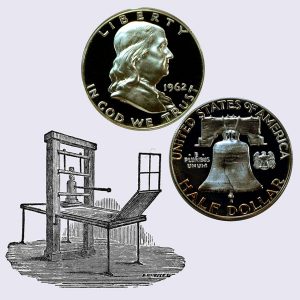