Today, the Morgan Silver Dollar Coin remembers when the New York Stock Exchange chose to close on July 31, 1914, due to the European situation and a potential for panic on the market.

From the New York Tribune newspaper of the following day:

The load of financing the world proved too much for Wall Street yesterday, and for the first time in more than forty years the Stock Exchange was closed and only the banks and the Sub-Treasury were open for business.

The decision not to open the New York Stock Exchange came after it became clear that the European muddle had got worse instead of better, and that to open would be to invite the world to dump its securities here, and thus welcome disaster. Had it opened, the governing committee was convinced, Wall Street would have been filled with wrecks before nightfall and the country plunged into a panic worse than anything that had been witnessed since 1873. Therefore it voted to close.

The Consolidated Exchange, which opens half an hour before the big board, closed promptly at 10 o’clock without doing any business worth mentioning, and the curb market managers declared all trading taboo.

The Cotton Exchange alone decided to continue business, and it remained open long enough for three of its members to close their doors. One of them, the leading bull house and prominent in the membership of the New York Stock Exchange, owed for cotton alone, according to estimates made on the floor of the exchange, $10,000,000.

That was the firm of S. H. P. Pell & Co. The other Cotton Exchange houses to fail were F. J. Frederickson & Co. and Homer, Howe & Co. The latter’s liabilities are not large and Mr. Frederickson estimates his liabilities at only $150,000, with assets in the form of securities worth more than that amount in a normal market.

Flower & Co., once the biggest stock Exchange house in the street, but of late a victim of dry rot, also failed.

These failures, announced before the noon hour, constituted the full list of casualties. A ticker agency was responsible for the circulation of a report that still another big stock and cotton house had gone under. This, it later announced, was without the slightest foundation. Had the stock exchange been open at the time, the report might easily have sent the house to the wall. As it was, the only thing lost was the temper of one of the partners. He was restrained with difficulty from dashing from his offices to that of the offending company across the street and taking the law into his own hands.

In banking circles yesterday sterling exchange was quoted at $6 the pound for cables, with a few transactions at that figure. Another consignment of $10,000,000 in coin came from Philadelphia and $11,000,000 left on the liner St. Louis. Local bankers announced the engagement of $3,650,000 in gold for export, some of it for Canada, where bankers were reported to be calling loans placed in this city.

As a precautionary measure against disturbance later the National Currency Association of New York sent Francis L. Hine, chairman of the Clearing House Association, and William Woodward, president of the Hanover National Bank, to Washington to negotiate with the government for an amendment to the existing law to permit part of the $500,000,000 emergency currency now authorized to come here if needed. They left on the midnight train and will confer with President Wilson and Secretary McAdoo today.

At the bankers’ conference, at which it was decided to send the envoys, it was admitted that today’s bank statement would show some impairment of reserves, but nothing to cause any worry, as this was to have been expected from the large gold shipments of the week.

In the face of the closing of the exchanges for an indefinite period, the temper of the financial district was excellent. Aside from the presence of more visitors than usual, more police and more leather-lunged vendors of “wuxtries,” there was no greater excitement than on an average midsummer day. The Street merely bowed to the inevitable—even joked at it, members of the exchange described themselves as now without visible means of support.

Beneath this quiet, even cheerful demeanor was a stolid determination to force things to right themselves at the earliest possible moment and to do nothing that would in any way bring further losses upon the community or embarrassment to the business of the country. It was recognized that this was a man’s task and both the financial giants and the smaller fellows bent it with a will.

The first work in hand, it was realized, was to exemplify the advice of Premier Asquith as applied to the Austrian-Servian dispute, “localize the trouble.” That this would become necessary was manifest long before New York arose for breakfast. Cables began pouring into the city just after 5 o’clock, announcing that the London Stock Exchange had been closed for an indefinite period.

More than one Wall Street man who had gone to bed late, praying that the day would not be any worse than its predecessor, was aroused by the cable company. That meant no more sleep, and long before the Street is usually astir brokers and sleepy-eyed clerks began to make their appearance.

Bankers, too, came in early, and before 9 o’clock a call had gone out for a conference in the office of J. P. Morgan & Co., where the night before it had been agreed that the Stock Exchange should remain open.

From the executive offices of the exchange a call had also gone out for the governing committee. A majority of the members had gathered about President Noble, many of them urging the absolute necessity of closing the exchange, when a telephone message came from Mr. Morgan asking the committee to postpone any action for a few minutes, pending the results of the conference in his office.

The request was granted, and while members, believing that the exchange would resume as usual, were gathering on the floor, impatient for the gong to signal the start, the two conference went over the situation.

Just before 10 o’clock the message came from the Morgan offices that the bankers thought it would be wiser for the exchange to close, as the majority of the committee already were of that opinion. A vote was taken and a few minutes later, as the clock in the face of the east gallery of the exchange was reaching 10 o’clock, Mr. Noble, with George W. Ely, the veteran secretary of the exchange, with his inevitable red carnation, climbed into the rostrum.

“The exchange closes” and “somebody’s busted” went sweeping over the floor and the crowded galleries.

Mr. Ely signaled for quiet and then announced the governing committee’s decision that the exchange should close for an indefinite period. There were a few cheers and then the members set about congratulating one another on the showing that had been made, thankful that, for the present, at least, the strain of standing up under an avalanche of securities was over.

On the Consolidated Exchange a similar scene was enacted, while the bulletin board of the New York curb, in Broad St., bore a typed message announcing that until further orders the members of the association would refrain from transacting any business in securities whether these were listed on the Stock Exchange or not. This ended the idea that the curb would take up the work of the board once the latter had closed.

At the beginning of the day on the Cotton Exchange the big Beaver St. building was jammed with members and their clerks. Liverpool, already open several hours, had sent over quotations radically lower than those at the close of the preceding day and thousands of bales of cotton were overhanging the market.

It was a crowd that could not be divided into bulls and bears. In the sense that the terms are ordinarily used there were few bears present. Men without commitments on either side of the market who came downtown intending to take a chance on short side with a few hundred or a few thousand bales stood aside.

The very air of the room spelled demoralization. Self-preservation, if nothing else, warned against selling cotton to someone who at any moment might declare his inability to carry out his contracts. Apparently no one wanted to take the risk of selling and covering only to find that there was none to whom to deliver the staple and to discover one’s self long on a falling market.

Also, it was realized that the condition was bad enough as it was. In the language of one broker, “many poor devils were there fighting for their very lives.” The would-be sellers refrained.

The Morgan Silver Dollar Coin shows with an image of the New York Stock Exchange from steps of the U. S. Sub-Treasury Building, circa 1917. 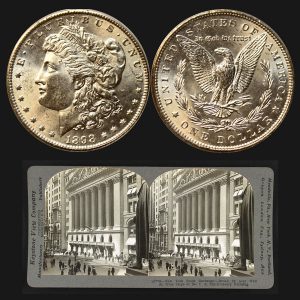