Today, the Silver Three-Cent Trime Coin remembers the financial crash that had the Stock Exchange in a panic on September 19, 1873.

From the Alexandria Gazette newspaper in the Washington, D.C., area of September 20, 1873:

The financial panic caused by the suspension of the Banking firm of Jay Cooke & Co. culminated yesterday most disastrously, and a long list of failures of prominent firms in New York and Philadelphia is announced.

The list of suspensions, commencing with that of Jay Cooke & Co. on Thursday, followed by …

All, however, are stock houses.

A prominent subject of discussion has been the extent of the liabilities of Jay Cooke & Co.

The firm has given no indication of the amount, but the most reliable reports place it at ten millions of dollars.

It is not thought, however, that this will “swamp”‘ the house, and it is confidently anticipated that they will settle up and resume business.

It is said that capitalists with ready money have offered seventy-five cents on the dollar for their paper.

Richard Schell is one of the heaviest failures. He owes a million of dollars, if not more. He says he can meet his liabilities if he is given time to work.

High financial authority gives as the cause of the panic that during the last four years it has been undertaken to construct and equip twenty-five thousand miles of railroads, involving an outlay of nearly $6,000,000,000, of which a considerable part cannot for years bring in any return.

So long as money owners were willing to buy bonds and stocks, these enterprises sailed on a smooth sea. The expenditures were met by receipts, but when the uprising of the farmers of the West, and other signs of dissatisfaction with the management of corporations begot a little distrust, the receipts of the more doubtful schemes failed to come in; their treasuries were depleted, and their bankers, who have gone outside of their legitimate business to endorse their securities, have gone by the board.

Telegraphic correspondence has been kept up between President Grant, and Secretary Richardson ever since the first news of the failure of Jay Cooke & Co. was known, and last night, at half past eleven o’clock, the Secretary sent a telegram to the Sub-Treasurer at New York, directing him to purchase ten million dollars worth of bonds today, a course, says the Washington Republican, which will have the effect to instantly relieve all apprehensions of further disturbance in the money market.

It is observable that, wild as the panic was, it has as yet had no appreciable influence on the general course of business. No reason for general distrust exists.

A special dispatch to the Baltimore American gives an account of the scenes at the New York Stock and Gold Exchange:

“There was a whirl like a maelstrom all day long at the Stock Exchange. Desperate earnestness, not unmixed with a slight element of joviality, pervaded the whole day’s business.

“Yesterday it was like a fight among madmen. The members had all congregated before the hour of opening, and the time and hour of business had began regardless of the stated hours.

“Groups were planted about the room, with hands and voices raised, screaming into the ears of their neighbors, and shaking two, three or four fingers in the faces of their next friends without cessation, except during the seconds required to jot a sale or an item in their books.

“Above this uproar the President of the Exchange sat in immovable serenity rising only occasionally to read the telegrams fluttering in upon him.

“As he hammered on his desk the operators surged like a flock of sheep to his neighborhood and listened to the first few words of the dispatch, and then impatiently were away again to the ceaseless squabble.

“But this ebullition of feeling was exceedingly transient, and the mob were in the maelstrom again before the wail ceased. ‘In fact,’ said an operator in one of his lucid moments, ‘there’s a good deal of brotherly consideration displayed; we feel charitable about this thing because it is not like Black Friday; you know this is a square bust.’

“Stocks continued to jump and tumble, and dealers fought desperately.

“The publication of failures continued from the President’s desk, telling of brothers failing in the strife, but the warfare went on the same, and even the gong at 3 o’clock failed to disperse the crowd.

“A loud hurrah hailed it, and hats were thrown in the air, and cheers were given as if the speculators were glad the day was over, but nevertheless they continued to make bids and offers until the officials of the Exchange had gone and a few watchmen hurled them out in the rain.

“The gold room represented to some extent the upper end of the see saw, but the solid metal fluctuated with almost the mercurial frivolity of paper stocks.

“The galleries contained a number of interested spectators, who could not get access to the more enlivening scene in the Stock room, and the operators of the floor were inclined to be noisy and vehement.”

At the Produce and Cotton Exchanges the effects of the Wall street crash were hardly visible.

There were fewer crowds than on ordinary days on ‘Change, and even less vehement talk than is sometimes displayed.

Samuel Wilkerson, secretary of the Northern Pacific Railroad Company, says that as usual with financial agents, Jay Cooke & Co. had made large advances to the company, but he did not think this had impaired their credit or crippled them.

Their failure was due to a sudden run in consequence of the stringency of the money market, caused by the manipulations of unscrupulous conspirators.

Two of the members of the firm were directors of the Northern Pacific Railroad Company. The result will be that the work of construction will be somewhat retarded.

It is more than probable that Congress will be asked to grant an extension of two years to the company beyond that already granted to enable it to complete the road.

A reporter of the Philadelphia Press on Thursday had an interview with Mr. J. Edgar Thompson, President of the Pennsylvania Railroad Company.

Mr. Thompson states that his company had no financial relations with Messrs. Jay Cooke & Co., and that its monetary concerns were not affected by the financial crash.

The present depression of the stock of the company he viewed as merely temporary.

At the Philadelphia Stock Exchange, after the great failure was announced, Pennsylvania Railroad shares declined heavily.

The attachment in the case of Win. O. Alexander, of Washington, vs. Jay Cooke & Co., to secure a deposit of some $16,000, was returned into court yesterday morning endorsed “levied upon the banking house, &c., as per schedule.”

Mr. Hatch, of Fiske & Hatch, states that owing to yesterday’s failures great demands came so suddenly and unexpectedly on their house that they could not be readily met.—There was no time left in which to obtain money on assets of the firm or to collect money due the firm.

Mr. Fahnstock, one of the firm of Jay Cooke & Co., says that for several weeks the uneasy feeling which prevailed in connection with new railroad schemes, caused a heavy drain upon the deposits both of their Philadelphia and New York houses.

The deposits in both cities suffered a continual diminution, until at the beginning of the present month, their deposits were lower than at any time during the severest stringency of the money market during last fall and this spring.

The drain upon the deposits, already so heavy, was still further increased by recent suspensions, and the demand for money was incessant.

A letter to the Gazette from Philadelphia, dated yesterday, says:

“The stoppage of the Banking House of Messrs. Jay Cooke & Co. yesterday, has caused a commotion that cannot be realized from any attempt at description. So far as I can gather it is thought that it will cause great stringency in money matters for a short period. However, almost everyone has a different theory, but I think it is safest to keep cool and wait until we ‘see what we shall see.’ ”

The Silver Three-Cent Trime Coin shows with an image of the panic near the Stock Exchange in September 1873. 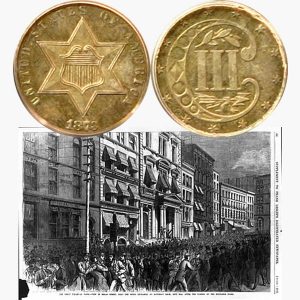