Today, the Hard Times Token, with its design of the Constitution, remembers the launch of that brave ship on October 21, 1797 and its move into dry dock thirty-six years later.

From the Boston Commercial Gazette.

As in the course of a few days the above noble ship will be hauled into the new and splendid dry dock, which has recently been completed at the navy yard, in the presence probably of the president of the United States, and many other distinguished officers of the government, as well as of an immense concourse of our fellow citizens, and as every circumstance relative to this favorite ship will now be rendered doubly interesting, we propose to offer a brief history of her splendid and glorious career, part of which is from memory, having been present when she was launched, part from official documents, and part we have gleaned from the old newspapers of the day.

She was built at Hart’s ship yard, at the north end, situated between the Winnisimmit ferry ways and the marine railway, and was launched under the superintendence of Col. Claghorn, the builder, on Saturday, the 21st of October, 1797; consequently she is now nearly thirty-six years old. In Russell’s Boston Commercial Gazette of the next Monday, we find the following notice:—

“The Launch— A magnificent spectacle! On Saturday last, at fifteen minutes past M. the frigate Constitution was launched into the adjacent element, on which she now rides an elegant and superb specimen of American naval architecture, combining the unity of wisdom, strength and beauty.

“The tide being amply full, she descended into the bosom of the ocean with an ease and dignity, which, while it afforded the most exalted and heartfelt pleasure and satisfaction to the many thousand spectators, was the guarantee of her safety, and the pledge, that no occurrence should mar the joyous sensations that everyone experienced; and which burst forth in reiterated shouts, which ‘rent the welkin.’

“On a signal being given from on board, her ordnance, on shore, announced to the neighboring country, that the Constitution Was Secure. Too much praise cannot be given to Col. Claghorn, for the coolness and regularity displayed in the whole business of the launch; and the universal congratulation he received, were evidences of the public testimony of his skill, intelligence and circumspection.”

The severe labor that attended her birth, which was only effected at the third trial, was seized upon by the enemies of a navy, who at that time were numerous and powerful, as prophetic of ill-luck! With how little reason, her brilliant career as fully demonstrated.

We may safely challenge the annals of naval history to name the ship that has done so much to fill the measure of her country’s glory. She sailed on her first cruise, on Sunday, the 2nd of July, 1798, and in the Commercial Gazette of the next morning, we find the following:

“Yesterday sailed on a cruise for the protection of our commerce, the frigate Constitution, commanded by captain Samuel Nicholson. This noble frigate reflects honor on all concerned in her construction—on the agent for obtaining every material of the best kind for her equipment, and for having the same manufactured in a superior manner; on the builder for the execution of the hull, in a style demonstrating our capability for building ships of war, at least equal to any in Europe.

“The captain is a brave and experienced commander, in whom may be reposed perfect confidence. Her lieutenants young men, who have commanded merchant ships with approbation, and of whom fair expectations may be entertained.

“Her crew are, with very few exceptions, native sons of Massachusetts, many of them connected by the strongest of human ties wives and children.

“Upwards of one hundred seamen have given orders in favor of their families, to draw monthly, half of their pay, the public having made arrangements for this purpose, evincive of its paternal care and encouragement of our marine.

“It would seem that nothing is wanting, to render this ship and her crew perfect, but that experience, which can only result from actual exercise at sea.”

She returned from this cruise in the middle of November. This was during the brief war with the French republic.

We notice the appointment of Isaac Hull, as her 4th lieutenant, who, after the lapse of fourteen years, was fortunate enough to occupy a higher station on her quarter deck, when the charm of British invincibility was destined to be forever broken.

On the 28th December, of the same year, she again sailed from Boston harbor, on her second cruise, from which she returned a few months after, without having the good luck to fall in with any of the enemy’s national ships.

Less fortunate in this respect than the Constellation, under the gallant Truxton, who, about this time, succeeded in capturing the French frigate L’Insurgente, of 40 guns and 417 men.

La Vengeance, a large French national ship 54 guns and 520 men, likewise struck her colors, but was fortunate enough to escape in a squall, and arrived at Curacoa five days after, a complete wreck.

Shortly after this, our commerce in the Mediterranean having suffered severely from the depredations and insults of the Barbary cruisers, our government determined at once on chastising them.

In May, 1803, commodore Edward Preble was appointed to the command of this favorite ship, and in June he sailed with the squadron destined to act against Tripoli.

To all conversant with this scene of war, it is well known the Constitution acted a conspicuous part, in fact bore the brunt of the battle.

After the destruction of the Philadelphia, of 44 guns she was for a long time the only frigate on the station, and being ably seconded by the gallant Decatur and the smaller vessels, did more in a single year to humble the pride of the Barbary states than all Christendom ever did before or since.

In short, such a variety of service, hair breadth escapes hard knocks, and perilous adventures has never been achieve by any single vessel. Peace having been concluded with Tripoli, she soon after returned home, where she remained unemployed, or nearly so, till the commencement of the late war with Great Britain. This was on the 18th of June, 1812.

On the 12th of July she left the Chesapeake for New York, preparatory to a long cruise, and on the 17th discovered and was chased by a British squadron, consisting of the Africa 64; Shannon and Guerriere 38; Belvidera 36; and Eolus 32; under the command of commodore Broke, of the Shannon.

During the most critical period of the chase, when the nearest frigate, the Belvidera, had already commenced firing, and the Guerriere was training her guns for the same purpose, the possibility of kedging the ship, although in nearly thirty fathoms of water, was suggested by lieutenant, now commodore Morris, and was eagerly adopted, with the most brilliant success.

The enemy, who had before been gaining, was now almost imperceptibly fallen astern, without their being able to conceive of the mysterious manner in which it was effected.

A lucky mile or thereabouts had been gained in this way, before the discovery was made, and then it was altogether too late to avail themselves of it, with any probability of success; a propitious breeze springing up at this moment, of which the Constitution felt the first effects, soon increased the distance, and rendered any further exertions in warping and towing unnecessary.

The Shannon had for some hours all her sails completely furled—with 13 boats towing ahead. The Constitution had three boats towing—the remainder being engaged in carrying out kedges, while the crew on board found sufficient employment in warping up to them; and to this most fortunate expedient is her miraculous escape to be attributed.

She bid a final adieu to her kind friends on the 19th, after a chase of nearly three days and three nights, and arrived safe in Boston on the 26th of July.

This has always been considered, and undoubtedly was, one of the most brilliant exploits that occurred during the war.

The deep feeling—the intense anxiety that reigned throughout the ship during this long and arduous chase, and which was pictured in the countenances of all on board, in characters too strong to be mistaken—may be imagined, but cannot be described.

Let us suppose for a moment, it had been the destiny of this fine ship to have fallen thus early in the war, into the hands of the enemy—a misfortune as has already been shown which was only escaped as it were, by a miracle— what a vast difference it would have made at the close of the war, not to speak of the great morale influence of a first victory, in the profit and loss of the naval glory; and although the balance would still have been greatly upon our side, yet the sum total would have been very sensibly or nearly one half diminished.

In the first place the loss of so fine a frigate at this early period would have been irreparable, and in following up the consequence —three of the most splendid victories of the war together with the same number of hair breadth escapes from a superior enemy, would now have to be deducted from the aggregate of our glory, making a difference, both ways, of more than 200 guns and almost 1,500 men.

After remaining a few days in port she sailed again, and on the 19th of August—precisely one month after her escape—was lucky enough to fall in with one of the same frigates cruising alone and with her name emblazoned in large characters in her fore-topsail.

Nothing daunted at this, however, the Constitution took the liberty of edging down for the purpose of ascertaining the object of such a close pursuit a few weeks before.

As soon as the two ships were within whispering distance, an explanation commenced which after a close conference of thirty minutes, ended to the complete satisfaction of capt. Hull. She proved to be H. B. M. frigate Guerriere, captain Dacres, of 49 guns and 302 men, and had been totally dismasted and in other respects was rendered such a complete wreck, that getting her into port was altogether out of the question.

She was accordingly burned, and the Constitution returned again to Boston, where she arrived on the 30th August. Never shall we forget the enthusiasm with which she was received.

The dry dock into which Old Ironsides is now about to be taken, as well as the one which has recently been completed at Norfolk, is undoubtedly one of the most splendid specimens of stone masonry to be found in the world.

We have heard it spoken of by intelligent travelers, who have visited most of the naval depots in Great Britain, France and Russia, as by far surpassing anything of the sort they had ever before witnessed.

Indeed no expense has been spared by the government to render these magnificent public works as complete and perfect in every respect as possible. They were planned and have been constructed under the superintending care of Colonel Loammi Baldwin, a gentleman who, for skill and science, has no superior in the country.

The Hard Times Token shows with an artist’s image of the U.S.S. Constitution, circa 1900. 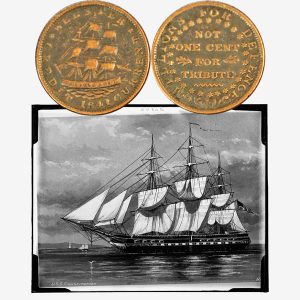