Today, the North Carolina State Quarter Coin remembers when the city of Raleigh celebrated its centennial on October 18, 1892.

The Durham [NC] Daily Globe newspaper of October 17, 1892 made suggestions to their neighbors on how to celebrate the past but also honor those currently working on the future during their centennial events.

Raleigh will celebrate her centennial tomorrow. It will be a great day in that city and will be observed with appropriate ceremonies.

There will be trades floats, civic parades, a great crowd and bustle enough to make the old town hum for once, if never again in its history.

There will be interesting addresses, patriotic speeches, and all the noisy demonstration which usually attends such celebrations.

Orators will revive and touch with gorgeous coloring the records of her past glories — will exaggerate the virtues of her illustrious dead and tell about the old days, the days when all the men were fair and women brave.

And this is all right — all right to honor and respect the old things, but there should not be too much of it.

One hundred years is a great while in the life of a city, and when we take into consideration the present size and importance of our capital, as compared with the leading cities of other states, it suggests to thinking people that we have made very poor use of our opportunities and that whatever else they might have been, the average Raleighite of generations past was not much in the matter of progress.

Younger towns have gone ahead and left the place still in its swaddling clothes, and it is only during the past few years — since young men and men with a proper appreciation of the state’s resources, took charge of affairs that the city has begun to move forward.

Raleigh has her schools, her state institutions, her historical relics and natural beauties, which have been sufficient to satisfy her quiet, easy going citizens, but it is only a recent thing that anything like enterprise has had the nerve to show itself within her peaceful gates.

During the past year a union depot of metropolitan appearance and proportion has taken the place of the shabby old affair which was for so many years an eyesore to travelers and a disgrace to the city.

In addition to this, new hotels and better buildings have been erected both in the business and residence part of the town, and while it can never be a bustling, manufacturing city such as Durham, there is today a spirit of growing activity which is gratifying.

And to whom is this improvement due?

Not to the fellows who lived a century ago, and who wore knee breeches and powdered wigs, but to the men of today — the young, progressive men who are solving the problem of life in a way that their fathers never did; who are fighting the hard battle of competition, and winning distinction by a much more arduous process.

And what The Globe wants to say is, that while in no way desiring to detract from or cheat the past, we want to suggest that there is not enough recognition of the living, and that in the talks tomorrow it would be a good time to tell about the fellows who are fighting now, and the possibilities to be reached.

It is all right to honor and reverence the dead, but to a man who is striving and struggling to build up his town, it is more gratifying to know that his neighbors appreciate him than his grandfather.

If The Globe were doing it, it would talk about men like Col. A. B. Andrews, Major John C. Winder, the Stronachs, Col. T. K. Jernigan, Colonel Pullen, and others whom we do not know, but who are there, all the same.

These are the fellows who are making the music now, and while following the band wagon we should not forget the musicians.

The North Carolina State Quarter Coin shows with a panoramic image of Raleigh, circa 1909. 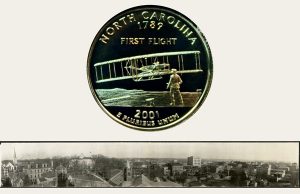