Today, the New York State Quarter Coin remembers when the people celebrated the opening of the completed railway between New York and Albany on October 8, 1851.

From the New York Daily Tribune newspaper of October 9, 1851:

The Public Opening of the Hudson River Railroad took place yesterday and was participated in by several thousands of the friends of the great enterprise.

In 1847, the line was located as far up as Poughkeepsie, and the work was begun in Westchester County.

For a considerable period after the organization of the Company, it was much depressed by financial difficulties, but when the character and importance of the undertaking became more generally known, these obstructions passed away and the confidence of the public and of capitalists was freely bestowed.

The Engineering Department was most ably managed up to August, 1849, by Mr. John B. Jervis, and from his hands it passed to those of Wm. C. Young, who has been untiring in the discharge of his duties, and who is now, or soon will be, President of the Company.

During the period of locating the line and procuring right of way, the Company was greatly annoyed and delayed by exorbitant claims for land damages, obstinacy of corporations to allow them to run into towns and cities, and other matters which clog the wheels of every great enterprise.

In this City the most determined and desperate efforts were made to prevent the Company from laying their rails below Thirty-second St.

Inflammatory meetings were held, and the most extravagant reports of “railroad murders,” and kindred clap-trap, were foisted upon the people ad nauseum.

Finally, after months of wordy war, the Common Council granted permission to lay rails to Chambers St., and after some ridiculous spasms over this awful invasion of vested rights, and a large expenditure of indignation against monopolizing Corporation, the contestants of Hudson St. lapsed into silence.

The location of the Road hence to Poughkeepsie was made upon the margin of the River in most places, yet it is probable that except the New York and Erie, no road in the country ever required more hard digging and difficult filling up in order to lay a decently straight track.

The work progressed slowly for many months, and considerable grumbling was heard at the non-fulfillment of expectations as to opening.

On the 30th of September, 1849, the road was opened from 32nd St. in this City to Peekskill, and on the last day of the year it was opened to Poughkeepsie, 75 miles from New York.

On the opening of navigation, in the Spring of 1850, the Company employed two Steamers to run from Poughkeepsie to Albany and established regular communication with the great western route via Albany and Buffalo, and since that period (a few weeks of ice excepted,) this communication has been regularly kept up.

During the year 1849 about forty miles of double track was laid, extending from New York to Peekskill, and a large amount of work was done to secure the structures, increase the conveniences and promote the safety of the road.

Four new passenger houses were erected, and increased wood and water accommodations provided, in view of the largely increasing business of the road.

That portion of the road between Poughkeepsie and Albany was put under contract in July 1850. On the  16th of June the road was opened to Hudson; July 7th, to Oak Hill; August 3d, to Tivoli; and October 1st, to New York.

The original line from Albany to Poughkeepsie was abandoned after the road was completed to the latter place, and a more bold and picturesque line adopted.

The original survey required a large amount of excavation and filling and was some distance from the river.

The road now runs nearly the whole distance from New York to Albany along the line of the Hudson, and is considered far preferable to the original line as proposed and surveyed.

The entire length fo the road is 143.75 miles, not including double track and slidings of 45 miles.

From the returns in possession of the financial officers of the Company, it is conceded that the entire Road — construction and equipments — will cost $300,000 less than the estimate made by  Mr. Young in the winter of 1849-50.

The location of the Road is too well known to need description. It has few of the wild and picturesque characteristics which are peculiar to the Erie Road, and, except the Hamburgh Tunnel, can boast of little that is strikingly grand in its construction.

It runs through densely peopled and fertile country, some of it the very Garden of Agriculture, and all of it bearing evidence of the facility and value of the improvements which are the consequence of easy and cheap market communication.

It passes through New York, Westchester, Putnam, Dutchess, Columbia, and a part of Rensselaer Counties, and through or near the villages and cities of Yonkers, Hastings, Tarrytown, Sing-sing, Peekskill, Cold Spring, Fishkill, New Hamburgh, Poughkeepsie, Hyde Park, Rhinebeck, Hudson, Stuyvesant, Castleton and Greenbush.

The way travel will of course be very great, since the trains will be more reliable and faster than the boats.

When fully equipped, the regular runs to and from Albany will be make in 4.5 hours.

Yesterday the public ceremonies of the opening were witnessed by some fifteen hundred persons at Greenbush, and by many thousands along the line.

Two trains were provided from this City for the accommodation of those who had been invited; the first one left at 6 o’clock in the morning and stopped at the principal towns on the route, taking up passengers.

The  second train started at 7 o’clock, and went through with but four stoppages.

In this train we saw a large number of notable citizens — the Mayor, Recorder, City Inspector, Coroner, about a dozen of the Aldermen, several legal officers, and many others less know to the public.

The train was conducted by Mr. Vermeule, and left Thirty-second St. with the splendid locomotive New York, Mr. Kinster, engineer, at 7:27, and at 11:14 arrived at Greenbush (or East Albany,) having passed the first train at Hudson.

It was in fact a gala day along the Road. Hundreds of country people had gathered at the various crossing places to see the Excursion trains, flags were raised, cannon fired, and all minor demonstrations of joy were freely indulged in.

The rapid train consisted of seven large cars, all filled, and as many of them were new, it was supposed that the conductor would be behind time, but instead of that he was a quarter of an hour ahead of his mark.

At Peekskill flags were hoisted, guns fired and hearty cheers given; at Poughkeepsie there was a large turnout, and the same demonstrations.

At Hudson the bridge on the sides of the road was lined with citizens, among them the imates of the Hudson Orphan Asylum, a pretty little band of parentless children, who bore banners inscribed, “Boorman, the friend of the Orphan,” “Boorman and the Hudson River Railroad, ” &c.

While the train stopped for wood and water, they sang some verses pre pared for the occasion.

We left Hudson amid the roar of cannon and the cheers of the large assemblage.

Some little amusement was occasioned about this time by the discovery of the Albany and Troy night boats, which ought to have been in New York before we started, fast aground side by side on the flats. Their perfect safety was manifest.

We should have observed that we had aboard a few strangers, who were making their first trip up the North River. The magnificent scenery of this most glorious of rivers, enhanced as it was by the varied and gorgeous splendors of Autumn, was to them an inexhaustless source of wonder.

The morning was clear, and as the fog rolled up the Palisades and the mountains of the western shore, and the dolphin hued forests and fields were made manifest in the clear light, the scene was one of surpassing grandeur and beauty.

But this landscape is too well known to need our feeble description.

All the officers of the company were on the train.  There were several officers and directors of other railroad companies.

When we arrived at Greenbush, we found a large number of Albanians, Trojans and others of that region in attendance, among them Gov. Hunt, Ex-Gov. Marcy, Hon. John C. Spencer, and many other men of note.

In a quarter of an hour the train which we had passed arrived, and shortly after the doors of the great Locomotive Depot were opened and some ten or twelve hundred persons went in to dinner.

And the festivities began…

The New York State Quarter Coin shows with an image of the Albany, NY railroad station, circa 1904. 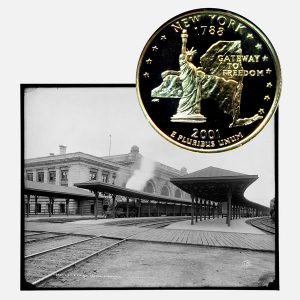