Today, the Grant Commemorative Silver Half Dollar Coin remembers when the people unveiled the monument in his honor on October 7, 1891 in Lincoln Park, Chicago.

From the Rock Island Daily Argus newspaper of October 7, 1891:

The Town Alive with Veterans.

A Splendid Program of Parade and Ceremony in Honor of the Distinguished Soldier.

Chicago, Oct 7. — Today is the day set for the unveiling of the equestrian statue to General Grant, situated on the lake shore drive in Lincoln park, and the city is alive with visitors desirous of witnessing that event.

Delegations of Grand Army men are present from all over the country, and if it does not rain cats and dogs there will be from 20,000 to 25,000 in the procession which precedes the services at the monument.

The fine granite arch with its battlemented pedestal for the reception of the equestrian statue has been ready for two years nearly, but the first cast of the statue was a failure, and it was not until about three months ago that it was received here and placed in position.

The meeting of the Society of the Army of the Tennessee was chosen as the time for the unveiling, and preparations were complete last night for the event.

The Procession to the Park.

The parade will form on Michigan avenue at the lake front park and move under the command of General Miles, U. S. A., along Michigan avenue to the Rush street bridge, north to Bellevue place, east to Lake Shore drive, and north to the monument.

Upon arriving at the monument the color-bearers and the color-guards of the United States troops and the National Guard will take position on the north steps and parapet of the monument.

The colors of the army and veteran societies will take position on the south steps and parapet of the monument.

The procession starts at 2 o’clock, and it will be at least 3 p. m. before the head reaches the scene of the ceremonies, and another hour will elapse before the exercises begin, to enable the rear of the column to arrive and take position.

A feature of the procession will be the presence in the line of the surviving members of Gen. Grant’s old regiment the Twenty-first Illinois infantry. They are under the leadership of Capt Ed Harlan, of Marshall, the senior officer of the regiment. There are about fifty of them and at their head will fly the very colors Grant unfurled in front of his headquarter tent when elected colonel of the regiment.

The Naval Salute and the Ceremonies Attaining the Event.

The moment the statue is unveiled the government vessels will fire a salute of twenty-one guns and upon a given signal from the Michigan every boat with a whistle to blow will shriek forth it answering noises for the space of a minute.

And when the Michigan raises her flag to the foremast all whistling will have ceased, and those within the range of Judge Gresham’s voice will listen to his oration, inspired by the memory of “the old commander,” quickened with eloquence by an individual friendship, which will have an added value for the reason that it is seldom this able jurist lifts his voice in any cause save when he has justice to spur him on and his conscience only to reward him for his zeal.

Exercises at the Monument.

As soon as the different divisions are in order, E. S. Dreyer, one of the trustees of the Grant Monument association, who will preside, will briefly introduce Bishop Newman, who will open the exercises with prayer, at the conclusion of which Edward S. Taylor, the secretary, will present the monument to the Lincoln park commissioners, and the statue will be unveiled by a son of Potter Palmer.

When the noise of the land and naval salute has died away the united bands will play “The Star Spangled Banner.”

Judge Walter Q. Gresham will deliver the oration of the day, and this will conclude the exercises, unless speakers are called for.

There will be many notable persons present from distant parts, not the least of whom, though he was the last to come, will be Governor Bulkeley, of Connecticut, with his staff; Mrs. Grant, the general’s widow, accompanied by Jesse Grant, arrived yesterday.

Mrs. Grant is the guest or Mrs. Potter Palmer, and will join the procession at the Palmer mansion on the Lake Shore drive.

Bishop Newman is also present, and will act as chaplain of the occasion.

The Parade on the Water.

Another feature of the occasion is the parade on the lake of three United States vessels—the man-of-war Michigan and the revenue cutters Fessenden and Johnson.

These with a large number of steamers, schooners and yachts will take positions about half a mile off the shore opposite the monument.

All the vessels will be gay with bunting, and barring a heavy gale this part of the program promises to be one of its chief features.

Soundings were taken yesterday over that portion of the lake where the vessels are to take their places and plenty of water was found.

After the ceremonies are through the vessels will form in line and proceed back to the city.

While the whistles are blowing a salute after the unveiling, the two city fire tugs will show their capacity for throwing water.

Night Meeting at the Auditorium.

The Society of the Army of the Tennessee held a business meeting this morning. Tonight it will hold another meeting at the Auditorium, at which the following program will be rendered: Music, prayer by Rt. Rev. Samuel Fallows, assembly of the trumpeters, reveille, music; addresses of welcome, Governor Joseph W. Fifer of Illinois, Mayor Hempstead Washburne; response for the society, Colonel James A. Sexton, senior vice president of the society; army songs, music; annual oration, General A. Hickenlooper; retreat, army songs, tattoo, music.

After the exercises at the Auditorium the society will be entertained at the Palmer by the Illinois commandery of the Loyal Legion.

Preparations at the Park.

The arrangements at the park are perfect. After the rear of the procession has arrived a barrier will be erected so that no vehicles can follow.

The space around the monument is roped off for the processionists alone.

These dividing lines extend in each case to the new regatta course.

West the spectators are allowed to approach the edge of the road which skirts the monument. All the space outside these boundaries and the entire new Lake Shore drive is open to the public.

No vehicles are permitted in the new drive, so that the view of the spectators there is not obstructed.

The new esplanade and drive outside the regatta course is joined to the main land by three pontoon bridges.

Business is largely suspended in the city, a number of prominent houses having closed at 1 p. m. for the day.

Decorations in the City.

Although there are no elaborate attempts at decoration, there are signs all over the city that the memory of the hero of the Wilderness and Appomattox is still green in the hearts of the people.

Portraits of the general are to be seen everywhere, decorated with the colors he loved so well and fought so nobly for, while streamers and flags adorn many store fronts and private residences, especially along the line of march.

Letters of regret at their inability to be present were received from President Harrison and ex-Presidents Grover Cleveland and Rutherford B. Hayes.

The Grant Commemorative Silver Half Dollar Coin shows with an image  of the monument in Chicago’s Lincoln Park, circa 1890s. 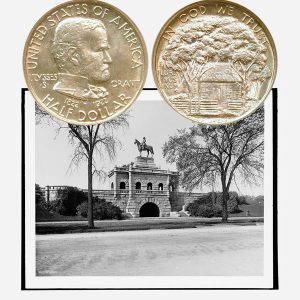