Today, the Pilgrim Tercentenary Commemorative Silver Half Dollar Coin remembers when a group of new Pilgrims began their journey on April 2, 1788  in a new Mayflower to settle in Ohio.

From Footprints of the Pioneers in the Ohio Valley, A Centennial Sketch by William Henry Venable, published in 1888:

In the autumn of 1785, General Benjamin Tupper, authorized by Congress, went to the Ohio country as surveyor. He was prevented from prosecuting his proposed work by the hostility of the Indians; but from what he saw and heard of the West, he was enthusiastically in favor of planting settlements there at as early a date as practicable.

In January, 1786, he visited General Rufus Putnam, at Rutland, Massachusetts, and the two veterans held a fireside conference, which resulted in the determination to attempt the formation of a company to purchase and colonize Western lands on the Ohio.

They prepared an address, which was circulated by means of newspapers, giving information concerning the West and appointing places of meeting in the various counties of Massachusetts, for the purpose of selecting delegates for a general meeting to be held in Boston.

Their joint call, or circular, begins by announcing that:

“The subscribers take this method to inform all officers and soldiers who have served in the late war, and who are, by a late ordinance of the honorable Congress, to receive certain tracts of land in the Ohio country, and also all other good citizens who wish to become adventurers in that delightful region, that from personal inspection, together with other incontestable evidences, they are fully satisfied that the lands in that quarter are of a much better quality than any other known to New England people; that the climate, seasons, products, etc., are in fact equal to the most flattering accounts that have ever been published of them; that being determined to become purchasers and to prosecute a settlement in that country, and desirous of forming a general association with those who entertain the same ideas, they beg leave to propose the following plan, viz: That an association by the name of The Ohio Company be formed of all such as wish to become purchasers, etc., in that country, who reside in the Commonwealth of Massachusetts only, or to extend to the inhabitants of other States, as shall be agreed on.”

This call, which bears the signature of both Putnam and Tupper, was dated January 10, 1786. Its suggestions were carried out.

These assembled at the “Bunch of Grapes” tavern, Boston, March 1, 1786. Rufus Putnam was chosen chairman.

The conference resulted in the appointment of a committee of five to draft a plan of organization for the contemplated land company, the committee consisting of Putnam, Cutler, Brooks, Sargent, and Cushing.

On March 3d, the committee reported articles of agreement, which were adopted. The work of soliciting subscriptions for stock was at once begun. By March, 1787, two hundred and fifty shares had been taken.

The company chose Putnam, Cutler, and General Samuel H. Parsons directors, and Parsons went to New York as agent of the directors, to negotiate the purchase of lands from Congress.

Parsons returned to his home without effecting a purchase, and Cutler was employed to press the matter to a consummation.

It was now that Cutler availed himself of the opportunity to present his views on the great ordinance, and to use his weighty influence for the speedy passage of that instrument.

The ordinance was enacted, as we have stated, on July 13th. Cutler’s land purchase was completed fourteen days later, namely, on July 27, 1787.

“Strange to say,” writes Dr. B. A. Hinsdale, an eminent authority on all facts concerning the Northwest — “Strange to say, the land purchase was attended by more trouble than the ordinance of government; but, July 27, Congress authorized the sale of five million acres lying north of the Ohio, west of the seven ranges, and east of the Scioto River, one million five hundred thousand for the Ohio Company, and ‘the remainder,’ to quote Dr. Cutler’s diary, ‘for a private speculation in which many of the principal characters of America are concerned.’ The total price agreed upon was three and a half millions of dollars, but as the payments were made in public securities, worth only twelve cents on the dollar, the real price was only eight or nine cents per acre.”

The actual settlement of the Ohio country was coincident with the establishment of a governmental administration for the Northwestern Territory.

The action and interests of the first settlers at Marietta were largely molded by the government established for the prospective people of the Northwest.

The directors of the Ohio Company held a meeting at Bracket’s tavern, Boston, November 23, 1787. They appointed General Rufus Putnam superintendent of their colony, and selected Ebenezer Sproat, Anselm Tupper, R. J. Meigs, and John Matthews surveyors of the newly purchased lands in the West.

At the same meeting, a number of workmen, including carpenters, boat-builders, and blacksmiths, were employed to make suitable preparations for journeying to the Ohio Valley. Tools, wagons, and horses were procured, and, in December, the mechanics and others assembled at Danvers, Massachusetts, from which village they presently started for the Far West.

They took their dreary way over the Alleghanies, and by the old Indian path, over Braddock’s Road, and after about a month’s journey reached the Youghiogheny at a point called Simrall’s Ferry.

General Putnam, with a smaller party made up of the surveyors and other leading men, left Hartford, in January, and pressed forward to the same place of rendezvous.

And now the stalwart New England boat-builders plied their sharp axes, and keen saws, and sounding hammers in the construction of that renowned craft, “The Mayflower,” which was to carry these new Pilgrims to a new New World.

This boat was the largest that had ever descended the Ohio. In length it was forty-five feet, and in width twelve feet; and it was capable of bearing a burden of fifty tons.

The “Mayflower” was rudely but strongly built, with sides proof against the bullets of the red savages. She was placed under command of Captain Duval, a brave commander, who helped build the first ship launched on the Ohio River.

On the afternoon of April 2, 1788, the “Mayflower,” accompanied by a flat-boat and several canoes, was unfastened from her moorings at Simrall’s Ferry to float down the Youghiogheny to the waters of the Monongahela, and onward to the Ohio.

On the morning of April 7th, the pioneers reached Kerr’s Island, and at noon, the same day, they reached their destination and landed on the east bank of the Muskingum, about four hundred yards above its mouth and nearly opposite to Fort Harmar.

The little company that disembarked on the bank of the Muskingum, on April 7, 1788, numbered forty- eight souls.

The Pilgrim Tercentenary Commemorative Silver Half Dollar Coin shows with an artist’s portrayal of building in the new frontier. 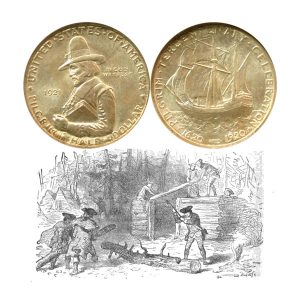