The Harper’s Encyclopedia of United States History, From 458 A.D. to 1902, published in 1902, provided the early history of the use of torpedoes and described how the channel was cleared near the end of the civil war.

The government of the United States, like that of Great Britain, refused to make use of Fulton’s torpedoes in warfare, but it was attempted by individuals against the British blockading squadron.

In New York Harbor a schooner named the Eagle was used as a torpedo-vessel. In her hold John Scudder, Jr., originator of the plot, placed ten kegs of gunpowder, with a quantity of sulphur mixed with it, in a strong cask, and surrounded it with huge stones and other missiles, which, in the event of an explosion, might inflict great injury.

At the head of the cask, in the inside, were fixed two gunlocks with cords, attached to their triggers at one end, and two barrels of flour at the other end, so that, when the flour should be removed, the lock would be sprung, the powder ignited, and the terrible mine exploded.

The Eagle, commanded by Captain Riker, sailed for New London late in June, 1813, where, as was intended, she was captured by armed men in boats sent from the Ramillies, Commodore Hardy’s flagship.

The crew of the Eagle escaped to the shore and watched the result.

An unavailing attempt was made to get the Eagle alongside the Ramillies, for the purpose of transferring her cargo to that ship.

Finally boats were sent out as lighters. and when the first barrel of flour was removed the explosion took place. A volume of fire shot up from the Eagle fully 200 feet in height, and a shower of pitch and tar fell on the deck of the Ramillies.

The Eagle and the first lieutenant and ten men of the Ramillies were blown into atoms, and some of the occupants of boats near were fatally injured.

This was followed by an attempt to explode a torpedo under the Ramillies.

A citizen of Norwich, Conn., acquainted with Bushnell’s torpedo, invented a submarine boat, in which he voyaged under water at the rate of 3 miles an hour.

Three times he went under the Ramillies, and on the third occasion had nearly fastened the torpedo to the ship’s bottom, when the breaking of a screw baffled the attempt.

He was discovered, but escaped.

A fisherman of Long Island, named Penny, made attempts on the Ramillies with a torpedo in a whale-boat, and Hardy was kept continually on the alert.

He kept the Ramillies constantly in motion, and caused her bottom to be swept with a cable every two hours, night and day.

Finally he warned the inhabitants that if such warfare was not discontinued he would proceed to burn the town. The warning was effectual.

In July, Mr. Mix, of the navy, attempted to blow up the Plantagenet, seventy-four guns, with a torpedo. She was lying off Cape Henry, Va.

Under cover of intense darkness, the torpedo was carried out in an open boat called the Chesapeake Avenger, and dropped so as to float down under the ship’s bow.

It exploded a few seconds too soon.

A column of water 25 feet in diameter, half-luminous with lurid light, was thrown up at least 40 feet high, with an explosion as terrific as thunder, producing a concussion like the shock of an earthquake.

It burst at the crown, and water fell in profusion on the deck of the Plantagenet. At the same moment she rolled into the chasm made by the explosion, and nearly upset.

Torpedoes were also placed at intervals across the Narrows, at New York, and at the entrance to the harbor of Portland.

The impression prevailed in the British navy that the United States government had adopted Fulton’s torpedoes, and this made the British commanders on our coast very circumspect.

No doubt the fear of torpedoes saved the American coast-towns from plunder and the torch.

Torpedo warfare was much practiced in the Civil War.

The torpedoes used by the Confederates were various in form and construction. The most efficient ones were the galvanic and percussion. The former were provided with a wire connected with a galvanic battery on the shore, by which the mine might be exploded at any moment.

The percussion or “sensitive” ones exploded by the act of forcible contact. Some of these were made in the form of a double cone, with percussion tubes arranged around the cylinder thus formed, at the point of contact of the bases of the cones, as seen in the illustration here given. Others were arranged as No. 2.

In the James River the torpedoes were chiefly galvanic. Some were cylindrical, with one end conical, but a greater portion were pear shaped.

These were anchored in the channels or in shallow water, by means of a segment of a hollow iron sphere, called a “mushroom,” which was attached to the buoyant mine by a chain.

These were generally sunk opposite batteries, where the wires connected with bomb-proofs on shore.

One of these, containing nearly a ton of powder; was planted in the centre of the deep channel at Drury’s Bluff.

On account of the depth of water, it was attached to a long rod, and that to the “mushroom ” anchor by a chain, as it was desirable to have the torpedo only the depth of a vessel below the surface.

No. 1 was made of a common barrel, with solid pointed ends, made of palmetto-wood, and were used in Charleston Harbor.

After the capture of Fort Fisher, vessels were sent to pick up the torpedoes sunk in the Cape Fear River.

As soon as Richmond was evacuated by the Confederates. in April, 1865, a notable expedition was undertaken in search of torpedoes. with which it was known a portion of that river abounded.

The expedition consisted of about 300 men in several tugs and thirty small boats, all under the command of Capt. Ralph Chandler, U. S. N.

On the morning of April 3, Captain Chandler started from Dutch Gap, with a flotilla and his flagship the Samgamon, and before sunset he had so cleared the river of these dangerous obstructions that the passage to Richmond was made comparatively safe, and the next morning President Lincoln went up to Richmond from City Point in the Malvern, Admiral Porter’s flagship.

The fishing was carried on in this wise:

The steam vessels were protected by torpedo-nets formed of ropes weighted with iron or lead, and furnished with hooks to catch the little submarine mines.

These nets were hung from spars placed athwart the bowsprit in front of the vessel, and sometimes in like manner along its sides.

A net like that at the bow was placed off the stern, and was dragged after the vessel as a fisherman drags his net.

No officer in the navy was better qualified for performing this task than Captain Chandler, requiring as it did cool courage and rare judgment.

“The knowledge that a simple touch will lay your ship a helpless, sinking wreck upon the water without even the satisfaction of firing one shot in return,” wrote Captain Chandler, “calls for more courage than can be expressed, and a short cruise among torpedoes will sober the most intrepid disposition.”

The Civil War Commemorative Gold Five-Dollar Coin shows with an artist’s image of the torpedoes and the net to capture them. 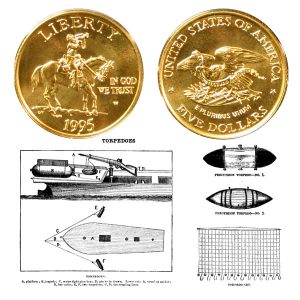