Today, the Columbus Commemorative Gold Five-Dollar Coin remembers another adventurer who began his around the globe travels on December 13, 1577.

From The Life of the Celebrated Sir Francis Drake, reprinted by the editor, Francis Henry Drake, a descendent, in March 1831:

After the death of his noble patron he returned into England, where Sir Christopher Hatton, who was then vice-chamberlain to Queen Elizabeth, privy counselor, and a great favorite, took him under his protection, introduced him to her majesty, and procured him her countenance.

By this means he acquired a capacity of undertaking the grand expedition which will render his name immortal.

The thing he first proposed was a voyage into the South Seas through the Straits of Magellan, which was what hitherto no Englishman ever attempted. This project was well received at court, and in a short time Captain Drake saw himself at the height of his wishes; for, in his former voyage, having had a distant prospect of the South Seas, he framed an ardent prayer to God, that he might sail an English ship in them, which he now found an opportunity of attempting, the queen’s permission furnishing him with the means, and his own fame quickly drawing to him a force sufficient.

In this fleet were embarked no more than one hundred and sixty-four able men, and all the necessary provisions for so long and dangerous a voyage; the intent of which, however, was not openly declared, but given out to be for Alexandria, though all men suspected, and many knew, he intended for America.

Thus equipped, on the 15th of November, 1577, about three in the afternoon, he sailed for Plymouth; but a heavy storm, taking him as soon as he was out of port, forced him, in a very bad condition, into Falmouth to refit; which having expeditiously performed, he again put to sea the 13th of December following.

On the 25th of the same month he fell in with the coast of Barbary, and on the 29th with Cape Verd; the 13th of March he passed the equinoctial; the 5th of April he made the coast of Brazil in 30° north latitude, and entered the River de la Plata, where he lost the company of two of his ships; but meeting them again, and having taken out of them all the provisions they had on board, he turned them adrift.

On the 29th of May he entered the port of St. Julian, where he did the least commendable action of his life, in executing Mr. John Doughty, a man next in authority to himself; in which, however, he preserved a great appearance of justice.

On the 20th of August he entered the Straits of Magellan; on the 25th of September he passed them, having then only his own ship, which, in the South Seas, he new named the Hind; on the 25th of November he came to Machao, in the latitude of thirty degrees, where he had appointed a rendezvous in case his ships separated: but Captain Winter, having repassed the Straits, was returned to England.

Thence he continued his voyage along the coasts of Chili and Peru, taking all opportunities of seizing Spanish ships, or of landing and attacking them on shore, till his crew were sated with plunder; and then coasting North America, to the height of forty-eight degrees, he endeavored to find a passage back into our seas on that side, which is the strongest proof of his consummate skill and invincible courage; for, if ever such a passage be found to the northward, this, in all probability, will be the method: and we can scarcely conceive a clearer testimony of an undaunted spirit, than attempting discoveries after so long, so hazardous, and so fatiguing a voyage.

Here, being disappointed of what he sought, he landed, and called the country New Albion, taking possession of it in the name, and for the use, of Queen Elizabeth; and, having careened his ship, set sail from thence, on the 29th of September, 1579, for the Moluccas.

The reason of Captain Drake’s choosing this passage round, rather than returning by the Straits of Magellan, was partly the danger of being attacked at a great disadvantage by the Spaniards, and partly the lateness of the season, whence dangerous storms and hurricanes were to be apprehended.

Perhaps, too, he gave out amongst his seamen, that he was deterred by the confident, though false, report of the Spaniards, that the Straits could not be repassed.

On the 13th of October he fell in with certain islands, inhabited by the most barbarous people he had met with in all his voyage.

On the 4th of November he had sight of the Moluccas, and, coming to Ternate, was extremely well received by the king thereof, who appears, from the most authentic relations of this voyage, to have been a wise and polite prince.

On the 10th of December he made Celebes, where his ship unfortunately ran on a rock the 9th of January following, whence, beyond all expectation, and in a manner miraculously, they got off, and continued their course.

On the 16th of March he arrived at Java Major; thence he intended to have proceeded for Malacca, but found himself obliged to alter his purpose, and think of returning directly home.

On the 25th of March, 1580, he put this design in execution; and, on the 15th of June, he doubled the Cape of Good Hope, having then on board his ship fifty-seven men, and but three casks of water. On the 12th of July he passed the Line, reached the coast of Guinea on the 16th, and there watered.

On the 11th of September he made the island of Tercera, and, on the 3d day of November the same year, entered the harbor of Plymouth.

In this voyage he completely surrounded the globe, which no commander-in-chief had done before. 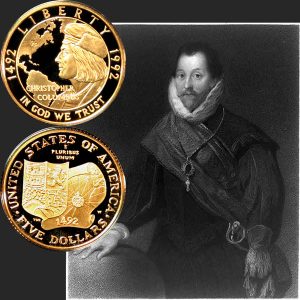