The author, Charles W. Upham,  of Salem Witches and Cotton Mather, published in 1869, speculated that the events were influenced by the Mathers.

Cotton Mather was the leading champion of the Judges.

In his Diary, he says : “I saw, in most of the Judges, a most charming instance of prudence and patience; and I know the exemplary prayer and anguish of soul, wherewith they had sought the direction of heaven, above most other people; whom I generally saw enchanted into a raging, railing, scandalous and unreasonable disposition, as the distress increased upon us.

“For this cause, though I could not allow the principles that some of the Judges had espoused, yet I could not but speak honorably of their persons, on all occasions; and my compassion upon the sight of their difficulties, raised by my journeys to Salem, the chief seat of those diabolical vexations, caused me yet more to do so.”

How, as he had not been present at any of the Trials, could he have given this commendation of the bearing of the Judges, based, as he says, upon what he had witnessed in visits to Salem?

I can think of but one way in which his statements can be reconciled.

Five of the eight Judges (Saltonstall’s seat being vacant) Stoughton, Sewall, Gedney, Corwin and Hathorne, severally, at different times, sat as Magistrates, at the Examinations, which occasions were accompanied with vexations and perplexities, calling for prudence and patience, much more than the Trials.

It is due, therefore, to Mather to suppose that he had frequented the Examinations, and, thus acquired a right to speak of the deportment of the Judges, “upon the sight of their difficulties.”

Much of the evidence given by the “afflicted children,” at the Examinations, can hardly be accounted for except as drawn from ideas suggested by Mather, on the spot, so as to reach their ears.

In the testimony of Susannah Sheldon, against John Willard, on the ninth of May, is the following singular statement: “There appeared to me a Shining White man.”

She represents it as a good and friendly angel, or spirit, accompanied by another “angel from Heaven,” protecting her against the spectre of John Willard.

Prefixed to the London Edition of the Cases of Conscience, printed in 1862, is a narrative, by Deodat Lawson, of some remarkable things he saw and heard, connected with the witchcraft transactions at Salem Village.

In it, is the following statement:

“The first of April, Mercy Lewis saw in her fit, a white man, and was with him in a glorious place, which had no candles nor sun, yet was full of light and brightness; where was a great multitude in white glittering robes; and they sang the Song in Revelation, v. 9, and the one hundred and tenth Psalm, and the one hundred and forty-ninth Psalm; and said with herself, ‘How long shall I stay here? Let me be along with you! ‘ She was loth to leave the place; and grieved that she could tarry no longer. This White man hath appeared several times to some of them, and given them notice how long it should be before they had another fit, which was, sometimes, a day, or day and half, or more or less. It hath fallen out accordingly.”

In the case of Margaret Rule, in Boston, the year after the Salem Delusion, of which it is not to be questioned that Mather had the management, this same “White” Spirit is made to figure; and also, in another instance. Mather alludes to the “glorious and signal deliverance of that poor damsel,” Mercy Short, six months before.

“Indeed,” says he, “Margaret’s case was, in several points, less remarkable than Mercy’s; and in some other things the entertainment did a little vary.”

Margaret, Mercy, and the “afflicted children” at Salem Village, all had their “White angel,” as thus stated by Mather:

“Not only in the Swedish, but also in the Salem Witchcraft, the enchanted people have  talked much of a White Spirit, from whence they received marvelous assistances in their miseries. What lately befell Mercy Short, from the communications of such a Spirit, hath been the just wonder of us all; but by such a Spirit was Margaret Rule now also visited. She says that she could never see his face; but that she had a frequent view of his bright, shining and glorious garments; he stood by her bedside, continually, heartening and comforting her, and counseling her to maintain her faith and hope in God, and never comply with the temptations of her adversaries.”

This appearance of the “White and Shining,” Spirit, or “White Angel,” exercising a good and friendly influence, was entirely out of the line of ordinary spectral manifestations; constituted a speciality in the cases mentioned; and seems to have originated in the same source.

Let it, then, be considered that Cotton Mather’s favorite precedent, which was urged upon Sir William Phips, and which Mather brought to the notice of Richards, and was so fond of citing in his writings, had a “White Angel.”

In his account of the “most horrid outrage, committed in Sweedland by Devils, by the help of witches,” we find the following:

“Some of the children talked much of a White Angel, which did use to forbid them, what the Devil had bid them to do, and assure them that these things would not last long; but that what had been done was permitted for the wickedness of the people. This White Angel would sometimes rescue the children, from going in with the witches.”

Mr. Hale also notices this feature of the Salem Trials — that the witnesses swore to ” representations of heavenly beauty, white men.”

Mather brought the story of this witchcraft “in Sweedland,” before the public, in America; he had the book that contained it; and was active in giving it circulation.

There can be little doubt that he was the channel through which it found its way to the girls in the hamlet of Salem Village.

He was, it is evident, intimate with Parris. How far the latter received his ideas from him, is, as yet, unknown. That they were involved in the same responsibility is clear from the fact that Parris fell back upon him for protection, and relied upon him, as his champion, throughout his controversy with his people, occasioned by the witchcraft transactions.

When these considerations are duly weighed, in connection with his language in the passage of his Diary, just quoted — “I saw a most charming instance of prudence and patience ” in the Judges: “My compassion upon the sight of their difficulties,” ” raised by my journeys to Salem, the chief seat of those diabolical vexations” — it seems necessary to infer, that his opportunities of seeing all this, on the occasions of his “journeys to Salem,” must have been afforded by attending the Examinations, held by the Magistrates who were also Judges; as it is established, by his own averment, that he never saw them on the Bench of the Court, at the Jury-trials.

It is, therefore, rendered certain, by his own language and by all the facts belonging to the subject, that the purpose of his “journeys to Salem ” was to attend the Examinations.

We are, indeed, shut up to this conclusion.

The Massachusetts State Quarter Coin shows with the image of a book about the witch trials written by Cotton Mather. 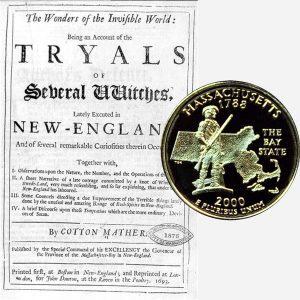