Today, the Maryland and Virginia State Quarter Coins remember the arbitration award on January 16, 1877 regarding the boundary between the two states.

From The Maryland and Virginia Boundary Controversy (1668-1894) by Louis Napoleon Whealton, published in 1897:

The commissioners began their task in the spring of 1872. Joint meetings were held at Annapolis, Crisfield, Baltimore and Richmond.

They went to Smith’s Island and inspected the line stones at Horse Hammock. The greater part of their time, however, was given to historical research, examining maps and rummaging libraries to find evidence by which the claims of each state might be sustained.

An agreement was made that the respective claims of Maryland and Virginia, as to boundary, be written out and presented in a joint meeting of the commissioners. Mr. Jones, on the part of Maryland, and former Governor Wise, in behalf of Virginia, presented claims.

An attempt to reach a compromise then followed, but the Maryland members could not agree to terms of adjustment and the work of the commission ended.

In the final report of the Virginia commissioners the claims of Maryland are stated as follows:

(1) “Maryland claims that by the charter of Lord Baltimore, the standpoint of the grantor was on the fortieth parallel of north latitude . . . that is granted.”

(2) “She next claims that the line running north to the further bank of said river, necessarily ran to the right bank of the Potomac. Virginia claims that this could not be so from the course of the river, for by the survey of Michler, the left or north bank was the further bank of the river, at the point where it was cut by the meridian of the first fountain thereof, traced from the parallel of forty degrees north latitude.”

(3) “Maryland replied that whatever the map of the river at its source, the line was to be run to a place called Cinquack, and the river was not to be crossed by it, but the line was to continue on the same bank of its beginning to that place; and that place was located at or near Smith’s Point. To this Virginia replies, that the charter does not require that the line, on whichever bank of the river it was to run, should run to Cinquack; but that it required that the line should follow the same (further bank of the river on which it was to begin) on that side where ‘the western shore looks toward the southern shore into a certain place called Cinquack, situate near the mouth of the same river.’ Not to Cinquack but to a place where ‘the western shore looked to the southern shore unto Cinquack’ and ‘Point Lookout’ is the place, and only place, answering the description of the grant.”

The commissioners followed this statement of points at issue, with an assertion of Virginia’s claim to the whole of the Potomac, and held to Point Lookout, Smith’s Island, the westernmost angle of Watkins Point, and the Calvert-Scarburgh line, as boundary marks.

“The territory and domain in dispute,” said the commissioners, “involve a very large amount in value, no less than all the water power, all the isles, all the alluvium and all the riparian rights, and rights of jurisdiction of the river Potomac; and forty square miles of territory between the Little Annamessex River and the head of Pocomoke Sound and on Smith’s Island, and one hundred and fifty square miles of waters in the Chesapeake Bay and in Tangier and Pocomoke Sounds, including the main seed beds of oysters in the waters of the Chesapeake Bay and on the Eastern Shore. The total money value involved cannot be less than twenty millions of dollars.”

Both states now turned to arbitration as a means of adjustment, and, in 1874, acts were passed to that effect.

The Hon. Jeremiah D. Black of Pennsylvania and Hon. Wm. A. Graham, of North Carolina, were appointed, and they selected Hon. Charles A. Jenkins of Georgia, as a third member of the Board of Arbitration. In 1876, the contending States agreed to the selection of James B. Beck of Kentucky in the place of Gov. Graham, who had died in the meantime.

Each State had the right to be represented by counsel before the arbiters. Former Governor William Pinkney Whyte and I. D. Jones were counsel for Maryland, and the attorney-general of Virginia appeared on behalf of his State.

The temporary line known as the “Lovett-Davidson Line” was to be observed until the award was made, and both states pledged obedience to the decision of the Board.

Maryland pledged her obedience with the proviso “that neither of the states, nor the citizens thereof, shall by the decision of said arbitrators, be deprived of any of the rights and privileges enumerated and set forth in the compact between them entered into in the year 1785.”

In 1876 an additional provision was made by both States “that the land holders on either side of the line of boundary, as may be ascertained and determined by the said award, shall in no manner be disturbed thereby in their title to and possession of their lands.”

On January 16, 1877, the award was made,” stating that, “having heard the allegations of the said States and examined the proofs on both sides, we do find, declare, award, ascertain and determine that the true line of boundary between the said States so far as they are conterminous with one another, is as follows, to wit:

BEGINNING at the point on the Potomac River where the line between Virginia and West Virginia strikes the said river at low water mark, and thence following the meanderings of said river by the low-water mark to Smith’s Point, at or near the mouth of the Potomac, in latitude 37° 53′ 08″ and longitude 76° 13′ 46″; thence crossing the waters of the Chesapeake bay by a line running north 65° 30′ east about nine and a half nautical miles to a point on the western shore of Smith’s Island, at the north end of Sassafras Hammock; thence across Smith’s Island to the center of Horse Hammock, on the eastern shore of Smith’s Island; thence to a point marked ‘A’ on the accompanying map, in the middle of Tangier Sound; thence by a line dividing the waters of Tangier Sound to a point where it intersects the straight line from Smith’s Point to Watkins Point. This point of intersection is marked ‘B’ on the accompanying map.

Thence along the line above mentioned which runs from Smith’s Point to Watkins Point until it reaches the latter spot, namely Watkins Point, which is in latitude, 37° 54′ 38″, longitude, 75° 52′ 44″. From Watkins Point the boundary line runs due east, to a point where it meets a line running through the middle of Pocomoke Sound, which is marked ‘C’ on the accompanying map; thence by a line dividing the waters of Pocomoke Sound, to a point in said Sound marked ‘D’ on the accompanying map; thence following the middle of Pocomoke River by a line of irregular curves, as laid down on the accompanying map, until it intersects the westward protraction of the boundary line marked by Scarburgh and Calvert, May 28, 1668, at a point in the middle of the Pocomoke River; thence by the Calvert and Scarburgh line to the Atlantic Ocean.”

In short, Virginia lost the Potomac, and to Maryland was given the south bank of that river. The part of Smith’s Island claimed by Virginia was retained by her; Tangier and Pocomoke Sounds were divided between the two states, Virginia getting the larger share; the southernmost and not the westernmost angle of Watkins Point was taken as the true Watkins Point, and Pocomoke River was divided between the states, up to where the Calvert-Scarburgh line began.

This award was accepted by Virginia and Maryland, and ratified by Congress.

In 1882, Mr. Wm. J. Aydelott on the part of Maryland, and Mr. G. H. Bagwell in behalf of Virginia, were appointed commissioners to survey and mark the line according to the decision of the arbitrators.

Col. F. V. Abbott of the Corps of Engineers of the United States Army surveyed the line, and the work was completed in 1883.

Col. Abbott says of the line: “Our eastern terminus near the ocean is some eighty feet too far north; and the western terminus and location of our boundary on the east bank of the Pocomoke River is some two hundred and seventy-five feet too far south, thus gaining for Virginia a little strip, though nearly three times as much more is gained by Maryland.”

Mr. Aydelott in his report speaks tenderly of this landmark and celebrated “marriage tree,” adding “may the woodman ever spare that tree.”

The Maryland and Virginia State Quarter Coins show with a map image of the area, circa 1886. 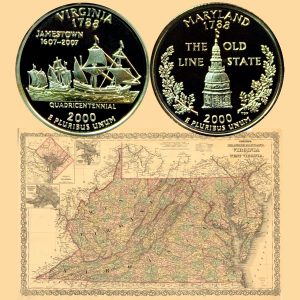