Today, the Maryland State Quarter Coin remembers when the men completed construction of the shot-tower in Baltimore on November 25, 1828.

First, the construction began in June with the laying of the foundation’s cornerstone.

Agreeably to arrangement, the venerable Charles Carroll of Carrollton, at eight o’clock yesterday morning, laid the Foundation Stone of the Shot Tower about to be erected at the corner of Pitt and Front streets.

It bears the following inscription:—

‘‘This stone was laid on the 2d day of June, 1828, by Charles Carroll of Carrollton, the only surviving Signer of the Declaration of America Independence”

The tower is to be built of brick, and of the best materials, and will be a huge structure, forty feet in diameter at the base, twenty two feet at the top, and two hundred and eight feet high.

A few months later, the completion of the new shot-tower was printed in the Niles Weekly Register of December 27, 1828:

The circular brick tower erected by the Phoenix Company for making shot, at the corner of Front and Pitt streets, has reached the intended elevation, being two hundred and thirty-four feet, three inches high from the pavement.

Its diameter at the bottom is forty feet, and at the top twenty.

The stone foundation wall is ten feet thick at the bottom and six at the top.

The brick work, which commences at the surface, is five feet and a half thick, of which thickness it continues for the height of nearly fifty feet; which it diminished four inches in every story, being twenty inches thick at the top of the parapet, three feet in height, which crowns the summit.

This huge structure, which is an excellent piece of brick work, was commenced on the 2d of June and finished on the 25th of November, and was built without scaffolding.

The parapet at the top is white, and somewhat resembles in its appearance a mural crown; and as the tower is well proportioned, the whole edifice is an ornament feature in the prospect of the city.

There are now two shot-towers in this city, capable of making a might quantity of shot, of all sizes, and of the very best quality; and it worthy of remark, for the benefit of anti-tariff men, that the protection of this manufacture has caused a reduction in the price of the article of thirty-three percent — the lead out of which it is made, being also more abundantly supplied and at cheaper rates, because of the enlarged market and more regular demand for it.

But our friend Mr. Ritchie cannot comprehend this — though such effects have universally followed protection, whether in the business of navigation or manufactures.

The Maryland State Quarter Coin shows with an image of the shot-tower in Baltimore, circa mid 1930s. 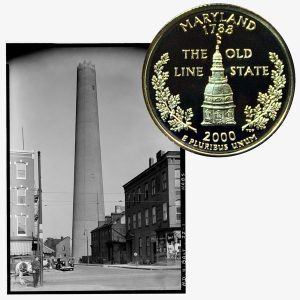