Today, the Columbus Commemorative Gold Five-Dollar Coin remembers the diary entries of October 11, 1492, when the sailors found objects in the ocean indicating land was near.

Included in The Discoveries of Prince Henry the Navigator, and Their Results; Being the Narrative of the Discovery by Sea, Within One Century, of More Than Half the World, by Richard Henry Major, F.S.A. Keeper of the Department of Maps and Charts in the British Museum, Hon. Sec. of the Royal Geographical Society, published in 1877:

The interval till 1492 was spent in a succession of appeals to the Spanish court, and in contending against all the vexatious variety of obstacles that ignorance, envy, or a pusillanimous economy could suggest.

At length, having overcome all obstacles, Columbus set sail with a fleet of three ships on the 3rd of August, 1492, on his unprecedented and perilous voyage.

The ordinary difficulties which might be expected to occur in so novel and precarious an adventure were seriously aggravated by the alarming discovery of the variation of the needle, as well as by the mutinous behavior of his crew; and his life was upon the point of being sacrificed to their impatience, when the fortunate appearance of land, on the morning of the 12th October, converted their indignation into compunction, and their despondency into unbounded joy.

The following is an extract from the Diary of Columbus, describing the event: —

Thursday, October 11th [1492] Sailed W.S.W. Had much sea [more than they had had in the whole voyage]. Saw some pardelas and a green rush close to the ship.

The sailors of the caravel Pinta saw a reed and a stick, and they picked up another small bit of wood, carved apparently with an iron tool, also a piece of cane, some other fragments of land vegetation and a small board.

The sailors of the caravel Nina also saw some signs of land, and a small piece of wood covered with dog-roses.

At these indications they drew in their breath and were all full of gladness.

That day they made twenty-six leagues before sunset. After sunset, sailed the original course to the westward, made twelve miles an hour, and by two o’clock after midnight they had made ninety miles, i. e. twenty-two leagues and a half; and as the caravel Pinta was the best sailor and was in advance of the admiral, she found the land and made the signals that the admiral had commanded.

The land was first seen by a sailor named Rodrigo de Triana; for at ten o’clock at night, the admiral while standing on the quarter-deck saw a light, although it was so indistinct that he would not say with certainty that it was land; but he called to Pero Gutierrez, the king’s groom of the chambers, and told him there was a light in sight, and desired him to look out, and so he did, and saw it.

He also spoke of it to Rodrigo Sanchez of Segovia who had been sent out as supervisor by the king and queen; but he not being in a good position for seeing, saw nothing.

After the admiral had mentioned it, it was observed once or twice.

It was like a small wax candle, which was lifted up from time to time, which few would take to be a sign of land, but the admiral held it for certain that land was close by.

After the Salve, which all the sailors were in the habit of saying and singing in their own fashion, while they were all assembled, the admiral begged and admonished them to keep a good look-out for land from the bows, and promised an immediate present of a silk doublet to him who should first call out that he saw land, besides the reward that had been promised by the sovereigns; viz. an annuity of ten thousand maravedis to him who first saw land.

At two o’clock after midnight the land appeared at two leagues’ distance.

They struck all sail except the storm square-sail, without topsails; and they lay to until Friday the 12th of October, when they reached a small island of the Lucayos [the Bahamas] which was called in the Indian language Guanahani.

Presently the people came towards us. They were quite naked. The admiral went on shore in an armed barge and took possession of the island for the king and queen.

Columbus named this island San Salvador, in honor of the Savior.

For centuries it was supposed to be identical with Cat Island, but it has been recently proved to be Watling’s Island, to the south-east of Cat Island.

In this first voyage the discovery was made of the islands of St. Salvador, Santa Maria de la Concepcion, Exuma, Isabella, Cuba, Bohio, the Archipelago off the south coast of Cuba, called by Columbus the Jardin del Rey, or King’s Garden, the islands of St. Catherine and Hispaniola.

On this latter Columbus erected the fortress of La Navidad, and established a colony.

He set sail on his return voyage on the 16th January, 1493, and, after suffering severely from a storm and a wearisome struggle with the trade-winds, arrived on the 15th of March at the little port of Palos, from whence he had sailed on the 3rd of August in the preceding year.

His reception in Spain was such as the grandeur and dignity of his unrivalled achievement deserved, and his entrance into Barcelona was scarcely inferior to a Roman triumph.

The Columbus Commemorative Gold Five-Dollar Coin shows with an image of him looking for land in the night. 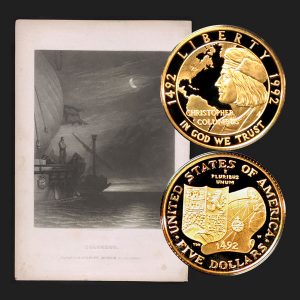