From History of Hampshire County, West Virginia by Hu Maxwell and Howard Llewellyn Swisher, published in 1897:

Droop Mountain. — In November, 1863, occurred the Droop Mountain campaign, so named from the place where an important battle was fought, November 6, between General Averell and a force of four thousand confederates under Major Echols.

Averell’s campaign into Greenbrier county, terminating at Rocky Gap, had not resulted in clearing that region of confederates. He prepared for another advance and set forward from Beverly November 1.

On the present occasion he provided himself with plenty of ammunition, so that, in case assistance again failed him, he could fight to a finish.

There was skirmishing all the way to Huntersville, and small parties of rebels were killed, captured or dispersed.

The first considerable force of confederates was encountered near Huntersville, under command of Colonel Thompson, but it fell back on the main body without a fight.

A few miles further a larger confederate force was met, but it also retreated without a fight.

The union forces were now within thirty-four miles of Lewisburg.

The confederates took position on Droop mountain and offered battle. They were advantageously placed, and a direct attack was believed by Averell to be difficult.

He prepared a flank movement, and also purposely delayed the attack till the next day in hope that General Duffie’s expected reinforcements would arrive.

They did not arrive, and the next morning General Averell began the battle.

He sent a force to gain the flank and rear of the confederate position and he moved up in front.

In the meantime reinforcements arrived for the enemy, and their coming was announced by loud yells and by a band of music.

Colonel Moor, with more than one thousand men, had been entrusted with the flanking movement. The guides who went with him proved worthless, and he was obliged to proceed the best he could; and the result was he did not reach his destination till nearly two o’clock in the afternoon, having marched nine miles through woods and over hills.

General Averell ‘s practiced eye detected the confusion in the ranks of the confederates on the mountain when they discovered Colonel Moor’s advance upon their flank.

An attack from the front was at once ordered, and the union troops moved up the mountain.

In the meantime the artillery poured a fire upon the confederates. They held their ground an hour and a quarter and then gave way everywhere and fled.

The pursuit was vigorous, and the confederate were scattered. A portion of them passed through Lewisburg the next morning in a deplorable condition.

They lost in killed and wounded two hundred and fifty; one gun was abandoned on the field and two more in the retreat. This left Echols only four guns.

Averell proceeded to Lewisburg and found the promised reinforcements there under General Duffle.

It was ascertained that the confederates had retreated in the direction of Dublin, on the Virginia and Tennessee railroad.

It was also learned that General Lee had promised to send ample reinforcements to Major Echols at or near that point.

This information induced Averell to march for that place in hope of capturing or scattering the forces there.

He set forward on November 8 with his entire command, including Duffie’s reinforcements.

The confederates had blockaded the road and much labor was required to cut it out.

General Duffie reported his troops unfit for service, as they had no rations and were tired.

The march to Dublin was therefore given up and Averell returned to Beverly, defeating Imboden on the road.

While in Greenbrier county Averell went to White Sulphur Springs and recaptured his wounded prisoners who had fallen into the hands of the rebels at the battle of Rocky Gap in the preceding August.

Averell’s loss at Droop mountain is not stated, except that he had fifty-five wounded. On November 17 his command arrived at New Creek.

Another source provided more details of the fighting and losses of the day.

From The History of Barbour County, West Virginia by Hu Maxwell, published in 1899:

Averell attacked General Echols, who had 1700 men strongly posted on the summit of a mountain.

It was a stubborn contest and the Federals gained the day by a flank movement, Echols retreating with a loss of 275 men and three cannon.

The Confederates made their escape through Lewisburg a few hours before General Duffie’s army arrived at that place to cut them off, while Averell was pursuing.

By blockading the road, Echols secured his retreat into Monroe County.

Averell attempted pursuit, but received no support from Duffie’s troops, who were worn out, and the pursuit was abandoned.

The Civil War Commemorative Half Dollar Coin shows with an image of Droop Mountain, courtesy of the West Virginia State Park. 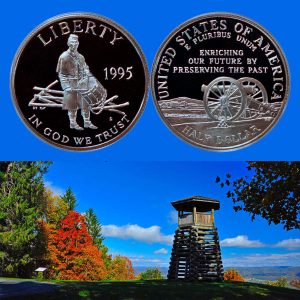