Today, the Two Cent Coin remembers the battle between the USS Kearsarge and the CSS Alabama near Cherbourg, France on June 19, 1864.

From the Annual Report of the Secretary of the Navy, Containing Reports from Officers, December 1864, United States Navy Department:

Sir: In obedience to instructions of the department, I have the honor to make the following supplementary report of the action between the Kearsarge and Alabama:

On the morning of the 19th, ultimo, the day being fine, with a hazy atmosphere, wind moderate from the westward, with little sea, the position of the Kearsarge at 10 o’clock was near the buoy which marks the line of shoals to the eastward of Cherbourg, and distant about three miles from the eastern entrance, which bore to the southward and westward.

At twenty minutes after 10 o’clock the Alabama was descried coming out of the western entrance, accompanied by the Couronne (iron-clad.)

I had, in an interview with the admiral at Cherbourg, assured him that, in the event of an action occurring with the Alabama, the position of the ships should be so far off shore that no questions could be advanced about the line of jurisdiction.

Accordingly, to perfect this object, and with the double purpose of drawing the Alabama so far off shore that, if disabled, she could not return, I directed the ship’s head seaward and cleared for action, with the battery pivoted to starboard.

Having attained a point about seven miles from the shore, the head of the Kearsarge was turned short around, and the ship steered directly for the Alabama, my purpose being to run her down, or, if circumstances did not warrant it, to close in with her.

Hardly had the Kearsarge come round before the Alabama sheered, presented her starboard battery, and showed her engines.

On approaching her at long range of about a mile, she opened her full broadside, the shot cutting some of our rigging and going over and alongside of us.

Immediately I ordered more speed; but in two minutes the Alabama had loaded and again fired another broadside, and following it with a third, without damaging us except in rigging.

We had now arrived within about nine hundred yards of her, and I was apprehensive that another broadside—nearly raking as it was—would prove disastrous.

Accordingly I ordered the Kearsarge sheered, and opened on the Alabama. The position of the vessels was now broadside and broadside; but it was soon apparent that Captain Semmes did not seek close action.

I became then fearful lest, after some fighting, that he would again make for the shore. To defeat this I determined to keep full speed on, and with a port helm to run under the stern of the Alabama and rake her, if he did not prevent it by sheering and keeping his broadside to us.

He adopted this mode as a preventive, and as a consequence the Alabama was forced with a full head of steam into a circular track during the engagement.

The effect of this maneuver was such that, at the last of the action, when the Alabama would have made off, she was near five miles from the shore; and, had the action continued from the first in parallel lines, with her head in shore, the line of jurisdiction would no doubt have been reached.

The firing of the Alabama from the first was rapid and wild; toward the close of the action her firing became better. Our men, who had been cautioned against rapid firing without direct aim, were much more deliberate; and the instructions given to point the heavy guns below rather than above the water-line, and clear the deck with the lighter ones, was fully observed.

I had endeavored, with a port helm, to close in with the Alabama; but it was not until just before the close of the action that we were in position to use grape. This was avoided, however, by her surrender.

The effect of the training of our men was evident; nearly every shot from our guns was telling fearfully on the Alabama, and on the seventh rotation on the circular track she winded, setting foretrysail and two jibs, with head in shore.

Her speed was now retarded, and by winding her port broadside was presented to us, with only two guns bearing, not having been able, as I learned afterwards, to shift over but one.

I saw now that she was at our mercy, and a few more guns well directed brought down her flag. I was unable to ascertain whether it had been hauled down or shot away; but a white flag having been displayed over the stern, our fire was reserved.

Two minutes had not more than elapsed before she again opened on us with the two guns on the port side.

This drew our fire again, and the Kearsarge was immediately steamed ahead and laid across her bows for raking. The white flag was still flying, and our fire was again reserved.

Shortly after this her boats were seen to be lowering, and an officer in one of them came alongside, and informed us the ship had surrendered and was fast sinking.

In twenty minutes from this time the Alabama went down, her mainmast, which had been shot, breaking near the head as she sunk, and her bow rising high out of the water as her stern rapidly settled.

The fire of the Alabama, although it is stated she discharged three hundred and seventy or more shell and shot, was not of serious damage to the Kearsarge.

Some thirteen or fourteen of these had taken effect in and about the hull, and sixteen or seventeen about the masts and rigging. The casualties were small, only three persons having been wounded; yet it is a matter of surprise that so few were injured, considering the number of projectiles that came aboard.

Two shot passed through the ports in which the thirty-twos were placed, with men thickly stationed around them, one taking effect in the hammock netting and the other going through the port on the opposite side, yet no one was hit, the captain of one of the guns being only knocked down by the wind of the shot, as supposed.

The fire of the Kearsarge, although only one hundred and seventy-three projectiles had been discharged, according to the prisoners’ accounts, was terrific.

One shot alone had killed and wounded eighteen men and disabled a gun. Another had entered the coal-bunkers, exploding, and completely blocking up the engine-room; and Captain Semmes states that shot and shell had taken effect in the sides of his vessel, tearing large holes by explosion, and his men were everywhere knocked down.

Of the casualties in the Alabama no correct account can be given. One hundred and fifteen persons reached the shore, either in England or France, after the action.

The prisoners state that a number of men came on board at Cherbourg, and the night before the action boats were going to and fro, and in the morning strange men were seen, who were stationed as captains of the guns.

Among these there was one lieutenant (Sinclair) who joined her in Cherbourg.

The Alabama had been five days in preparation. She had taken in three hundred and fifty tons of coal, which brought her down in the water.

The Kearsarge had only one hundred and twenty tons in; but as an offset to this, her sheet chains were stowed outside, stopped up and down, as an additional preventive and protection to her more empty bunkers.

The number of the crew of the Kearsarge, including officers and sick men, was one hundred and sixty-three; and her battery numbered seven guns—two 11-inch, one 30-pounder rifle, and four light 32-pounder guns.

In the engagement the Alabama fought seven guns and the Kearsarge five, both exercising the starboard battery, until the Alabama winded, using then her port side with one gun, and another shifted over.

The collateral events connected with this action have already been laid before the department.

I enclose a diagram showing the track which was described during the engagement by the rotary course of the vessels.

I have the honor to be, very respectfully, your obedient servant,
John A. Winslow

The Two Cent Coin shows with an artist’s portrayal of the battle between the USS Kearsarge and CSS Alabama on June 19, 1864. 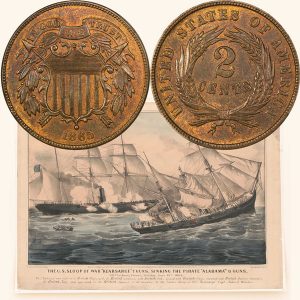