Today, the Franklin Silver Half Dollar Coin remembers when the man departed for England to represent the colonies on November 7, 1764 after his defeat at the polls.

From The Writings of Benjamin Franklin collected and edited by Albert Henry Smyth published in 1907:

Never had Philadelphia been so aroused over a political contest.

Franklin and Galloway headed the old ticket; Willing and Bryan championed the new.

The Moravians and Quakers were at the back of the old ticket; the Dutch and the Presbyterians with a sprinkling of Episcopalians supported the new.

A vivid description of the scene upon the day of election is found in a letter from Mr. Pettit of Philadelphia to Joseph Reed: —

“The poll was opened about nine in the morning, the first of October, and the steps so crowded, till between eleven and twelve at night, that at no time a person could get up in less than a quarter of an hour from his entrance at the bottom, for they could go no faster than the whole column moved.

“About three in the morning, the advocates for the new ticket moved for a close, but (O! fatal mistake!) the old hands kept it open, as they had a reserve of the aged and lame, which could not come in the crowd, and were called up and brought out in chairs and litters, and some who needed no help, between three and six o’clock, about two hundred voters.

“As both sides took care to have spies all night, the alarm was given to the new ticket men; horsemen and footmen were immediately dispatched to Germantown and elsewhere; and by nine or ten o’clock they began to pour in, so that after the move for a close, seven or eight hundred votes were procured; about five hundred or near it of which were for the new ticket, and they did not close till three in the afternoon, and it took them till one next day to count them off.

“The new ticket carried all but Harrison and Antis, and Fox and Hughes came in their room; but it is surprising that from upwards of 3900 votes, they should be so near each other.

“Mr. Willing and Mr. Bryan were elected Burgesses by a majority of upwards of one hundred votes, though the whole number was but about 1300.

“Mr. Franklin died like a philosopher. But Mr. Galloway agonized in death, like a mortal deist, who has no hopes of a future existence.

“The other Counties returned nearly the same members who had served them before, so that the old faction have still considerable majority in the House.”

After fourteen years of service Franklin was unseated by a majority of twenty-five in a vote of four thousand.

When the Assembly met, his name was proposed as the agent of the House to present their petition to the king.

Dickinson ineffectually opposed the nomination with all his eloquence.

By a vote of nineteen to eleven Franklin was appointed the agent of the province.

The minority prepared a protest which they asked to have inscribed upon the minutes.

Franklin printed a reply entitled “Remarks on a Protest.”

A loan was authorized in order to raise money for his expenses. Eleven hundred pounds were subscribed.

Franklin accepted five hundred, and on November 7, 1764, was escorted by a cavalcade of three hundred citizens to Chester where he took ship for England.

Galloway, Wharton, and James accompanied him in the ship from Chester to Newcastle and went ashore there.

“The affectionate leave taken of me by so many friends at Chester was very endearing,” Franklin wrote to his daughter from Reedy Island, “God bless them and all Pennsylvania.”

The Franklin Silver Half Dollar Coin shows with an artist’s image of the gentleman, circa 1778. 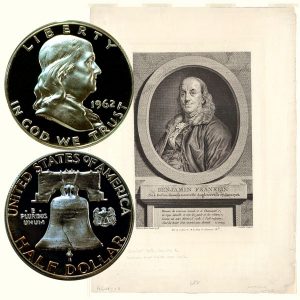