Today, the Gettysburg Commemorative Silver Half Dollar Coin remembers the dedication and unveiling of the National Monument on July 1, 1869.

Dedication Services. [By Telegraph to the Tribune.]

Gettysburg, July 1.— Fifteen thousand people came together today to dedicate anew the beautiful cemetery which no words could so consecrate as the tender speech of Abraham Lincoln, uttered here six years ago.

The cemetery lies on a bill, swept over by the storm of battle in those terrible days of July. On the spot where they fell the soldiers lie buried, the resting place of each known and marked.

Commissioners of every State, whose sons sleep here, have had the cemetery in charge. Each State has contributed her proportion toward the cost of the grounds and the erection of the monument; and today the eighteen commissioners resigned their six years’ trust, and delivered the cemetery to the National Government.

The public ceremonies were opened with music from a fine band. Then Henry Ward Beecher uttered a solemn prayer in the large, and loving, and fervent words so familiar from his lips.

Gen. Meade said a few earnest words, recalling the history of the place, recognizing the courage, and self-sacrifice, and patience that made this day possible, and feelingly pleading that the bones of the Rebel dead should be gathered, and kindly and decently interred.

After music from a volunteer choir from Baltimore, the monument was unveiled, while the Star Spangled Banner was played.

The monument is an obelisk of granite, 50 feet high, surmounted by the inevitable figure of Fame, in white marble. At the base are four projections, on each of which stands a commemorative figure. A belt of thirty-six stars surrounds the column, and the national bird is emblazoned on the front; an entablature bears the date of the battle, July 1, 2 and 3, 1863.

Senator Morton, sitting in his chair, read his speech on the causes of the triumph of the North and the future of the Republic. It was comprehensive, mildly belligerent, able and extremely energetic, but fell without response on the ears of those phlegmatic bolder farmers.

Then Bayard Taylor read his fine poem. The great audience stood quiet, touched by its grandeur and simplicity; his clear voice bore the swelling strain far out over the summer fields; and the sweet Charity, and Forgiveness and Reconciliation which he invoked seemed to stand visibly beside the leveled graves.

Music sounded again, and then a prayer was breathed. Then Gen. Meade, who had managed untold brigades of men, marshaled an array more powerful—the little army of the little children of dead soldiers.

To their great delight, he reviewed them and gave them a bit of friendly talk, and they cheered in small voices. Maryland, in the form of a gallant young officer, gave them a flag, and the small voices cheered again.

After the children had dispersed, the crowd drifted away, lingering in the quiet place, or wandering off to the old battle-field, or coming into town with friendly speech and handshakings, right and left.

Tonight Gettysburg will be a village again, forgetting already the faces of her 20,000 inhabitants of today.

Gettysburg, July 1.—The morning opened clear but sultry, and every prospect for good weather. So thronged was the town that many had to walk the streets all night. Strangers were busily engaged in roaming around the battlefield and listening to the stories of the progress of the flight, or gazing upon trees shattered by artillery.

The monument in the Cemetery is greatly admired. It has already been described by so many writers for the press that repetition is unnecessary. The object of the Committee having the erection in charge has not been so much to commemorate the great and most important victory as to mark the place or the remains of those who fell in battle, to honor their memories, to sanctify their example, and in accomplishing this object the Board have endeavored to avoid everything in these memorials which might perpetuate the animosity which produced the Rebellion.

The procession formed about 10 o’clock, and soon after commenced the march for the Cemetery, headed by a military escort under command of Gen. Humphreys. The escort consisted of companies of infantry from York and Chambersburg, and one from Utica. N. Y.

On reaching the Cemetery the military were stationed at about the foot of the monument. Facing the front of the monument was a large covered platform, which was soon tilled by the orator of the day, invited guests and their ladies.

Upon the platform was also seated the Arion Musical Association of Baltimore, which opened the proceedings by singing a hymn for the Cantata of Ester, entitled “Once more the ?pot with solemn awe we tread.”

David Wills, President of the Commission, then called the meeting to order…

The Gettysburg Commemorative Silver Half Dollar Coin shows with an image of the Soldiers’ National Cemetery, circa 1882. 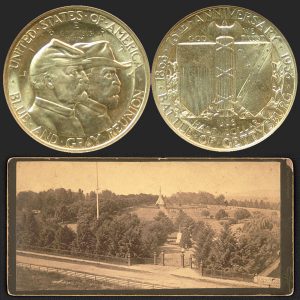