Today, the Congress Commemorative Gold Five-Dollar Coin remembers when Alexander Hamilton, the first Secretary of the Treasury, submitted his recommendations regarding the country’s debt on January 14, 1790.

In January Congress reassembled. In his address, the President spoke of the resolution of September 21, and added:

“It would be superfluous to specify inducements to a measure, in which the character and permanent interests of the United States are so obviously and so deeply concerned.”

On January 14, 1790, Hamilton sent in his first report on the public credit.

It is one of the most important financial documents yet penned in America. It formed the basis of the discussions during the larger part of this session of Congress, and its recommendations, with comparatively few modifications, became law.

Briefly speaking, Hamilton discussed the reasons for, the nature, methods, and means of, a permanent provision for the public debts.

The Revolutionary period had left the United States heavily in debt. The question that required immediate solution was not whether debts should be contracted or taxes levied, but whether the existing debts ought to be provided for by annual appropriations or be converted into obligations of a more or less permanent character.

This question of funding or not funding Hamilton probably did not decide simply on its abstract merits; it would not have been in keeping with his character and methods, as he was essentially a man of precedents. He no doubt considered the experience of Europe.

The American financier who looked for precedents at that time would naturally seek them in France, England, or Holland.

The previous financial history of France has been characterized as a history of bankruptcies; a number of them was found — like milestones along the road to destruction.

Of Holland and England an American would prefer the latter, because of greater similarity in political and economic conditions. England had begun the practice of funding towards the end of the seventeenth century, and had since that time greatly increased her debt.

The political tendency of a domestic debt to strengthen the power of a government as against its own subjects was well understood. Its economic effects were misapprehended.

Bishop Berkeley indicated quite plainly that he considered the public funds a mine of gold. Melon (1735) contended that public debts were debts of the right hand to the left. Pinto (1771) “undertook to demonstrate that public debts…were so much added to the national wealth by the magical influence of credit.”

Judge Blackstone deprecated the amount of the British debt, but thought the debt increased the cash and created a new species of currency. A certain proportion of debt, he concluded, seemed, therefore, to be highly useful to a trading people.

On the other hand, David Hume and Adam Smith exaggerated the injurious effects of the funding system, or, more correctly, they underestimated England’s capacity for industrial and commercial development and consequent ability to pay taxes.

In America several of the leading men seem as yet to have had no very distinct ideas as to some of the social and political tendencies of public debts.

Gouverneur Morris declared: “The domestic debt is always a mere nominal thing. It neither adds to, nor takes away from the mass of national property, but furnishes a species of private property, which…may be rendered of admirable use to increase commercial circulation, invigorate manufactures, and consequently to benefit agricultural interests.”

These few touches may indicate the environment of Hamilton. He had early turned his attention to the debts of the Confederation.

A few months later he thought the practice of funding might have avoided the pernicious depreciation of the currency.

Next year he had possibly changed his mind as to the necessity of such a spur to industry.

“The establishment of permanent funds,” he believed, “would not only answer the public purposes infinitely better than temporary supplies, but it would be the most effectual way of easing the people.”

While in a grand committee in November, he suggested that the substitution of certificates for Continental paper money “would multiply the advocates for federal funds for discharging the public debts, and tend to cement the Union.”

Soon afterwards he asserted that an annual provision for the purpose of paying the interest and discharging the principal would be too precarious. If its continuance and application were certain, it would not afford complete relief.

Many persons wanted the principal. As they could not discharge it, the next expedient was to fund the debt, and render the evidences of it negotiable.

By this arrangement, “the active stock of the nation would be increased by the whole amount of the domestic debt, and of course the abilities of the community to contribute to the public wants; the national credit would revive, and stand hereafter on a secure basis.”

He was one of the leading men in advocating funding during the Confederation. He drew a resolution, which was adopted in January, 1783, to the effect that Congress would “make every effort in their power to obtain from the respective states substantial funds, adequate to the object of funding the whole debt of the United States.”

But Congress was unable to command the necessary resources, and all efforts to give the debt a more permanent character failed.

In his report of 1790, Hamilton repeated and developed the same ideas. He laid stress on the importance of public credit.

The prosperity of the citizens of America, their relief from present embarrassments, their character as a people, the cause of good government, depended materially on upholding the public credit.

He expressed the same thoughts in another form. “To justify and preserve confidence; to promote the increasing respectability of the American name; to answer the calls of justice; to restore landed property to its due value; to furnish new resources, both to agriculture and commerce; to cement more closely the union of the States; to add to their security against foreign attack; to establish public order on the basis of an upright and liberal policy; — these are the great and invaluable ends to be secured by a proper and adequate provision for the support of public credit.”

He dwelt on the economic advantages. A national debt which was properly funded and an object of established confidence answered most of the purposes of money.

Trade would be extended, because there would be more capital to carry it on. More capital could be commanded in agriculture and manufactures. The interest of money would be lowered. In brief, there would be additional aids to labor, industry, and the arts of every kind.

A debt without any permanent provision would become “a mere commodity, and a precarious one,” and would contribute to the scarcity of money.

In later years he stated an additional reason for funding.

“It was desirable to guard the government and the creditors against the danger of inconstancy in the public councils.”

The proper funding of the debt would render it a national blessing, yet he ardently wished to see it incorporated as “a fundamental maxim in the system of public credit of the United States, that the creation of debt should always be accompanied with the means of extinguishment.”

This he regarded as the true secret for making the public credit immortal.

In Congress the great majority were agreed as to the expediency of a permanent provision, and readily adopted Hamilton’s recommendation.

The Congress Commemorative Gold Five-Dollar Coin shows with an artist’s image of Alexander Hamilton, circa 1896. 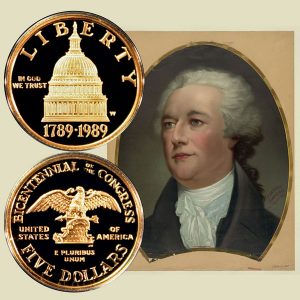