Unlike today, however, the early debts were repaid rapidly.

From the Rhodes Journal of Banking — A Practical Bankers’ Magazine for August 1894:

On assuming the position of Secretary of the Treasury, Hamilton found himself entirely without funds to meet the ordinary expenses of the Government except by borrowing, until such time as the revenues from duties and tonnage began to come into the Treasury.

Under these circumstances he was compelled to make arrangements with the Bank of New York and the Bank of North America of Philadelphia, the Bank of the United States being not in existence, for temporary loans, and it was money received from these banks that paid the first installment of salary due President Washington, Senators, Representatives and officers of Congress during its first session under the Constitution beginning March 4, 1789.

The following letter was sent on September 22, 1789, to Otho H. Williams, Esq, Collector of Customs at Baltimore, and refers to negotiations which had recently been made with the banks mentioned:

“Sir:—In consequence of arrangements lately taken with the Bank of North America and the Bank of New York, for the accommodation of the Government, I am to inform you that it is my desire that the notes of those banks payable either on demand or at no longer period than thirty days after their respective dates, should be received in payment of duties as equivalent to gold and silver, and that they will be received from you as such by the Treasurer of the United States.

“This measure, besides the immediate accommodation to which it has reference, will facilitate remittances from the several States, without drawing away their specie—an advantage in every view important.

“I shall cause you shortly to be furnished with such indications of the genuine notes as will serve to guard you against counterfeits, and shall direct the manner of remitting them.

“In the meantime and until further orders you will please to receive them, transmitting to me a weekly account of your receipts and payments.

“The Treasurer of the United States will probably have occasion to draw upon you for part of the compensation for members of Congress from your State.

“These drafts you will also receive in payment of the duties or in exchange for any specie arising from them which shall come to your hands.”

The following is an extract from the report of the Secretary of the Treasury to the House of Representatives, dated March 1, 1790, transmitting additional estimates of appropriations required:

“As to the interest on loans for the current service, those which have been already made were the result of necessity; they have been in great part satisfied, and the residue will shortly be reimbursed out of the product of the duties; but the interest being an extra expenditure requires an appropriation; and as a further anticipation of the receipts into the Treasury, to satisfy immediate demands upon it, will be unavoidable, it is necessary this also should be provided for.

“Obvious considerations dictate the propriety in future cases of making previous provision by law for such loans as the public exigencies may call for, defining their extent and giving special authority to make them.”

The estimate accompanying was as follows:

September 13, 1789, $20,000—A loan agreed to be made by the Bank of New York to the Secretary of War in pursuance of an appropriation made by an Act of Congress of August 20. 1789. This Act provided “that a sum not exceeding $20,000 arising from the duties on imports and tonnage shall be and the same is hereby appropriated to defraying the expenses of negotiating and treating with the Indian tribes.”

September 14, 1789, $80,000—A loan agreed to be made by the Bank of New York to the United States, conformably to certain articles of agreement of the same date.

September 21, 1789, $50,000—A loan agreed to be made by the Bank of North America to the United States, conformably to certain articles of agreement of September 17.

October 1, 1789, $20,000—A loan agreed to be made by the Bank of New York to the United States, conformably to certain articles of agreement of October 1.

October 10, 1789, $20,000—A loan agreed to be made by the Bank of North America to the United States, conformably to certain articles of agreement of October 10.

December 2,1789, $20,000—A loan agreed to be made by the Bank of North America, conformably to articles of agreement of November 30, and $8 81 for an overcharge in their interest account.

December 2, 1789, $1,600—For a warrant (No. 6) drawn by the Secretary of the Treasury on Joseph Howell, Jr., Paymaster-General, in favor of the Treasurer, being for the present service of the public.

These loans were all repaid according to contract, the final payment being made June 8, 1790.

The New York State Quarter Coin shows with an image of Alexander Hamilton, attributed to artist Charles Shirreff, circa 1790. 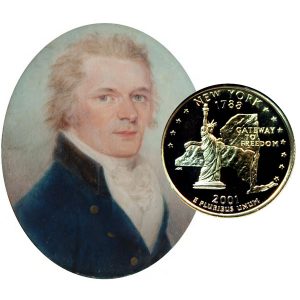