Today, the Barber Silver Dime Coin remembers when Annie Londonderry won her wager to bicycle around the world on September 12, 1895.

From the San Francisco Call newspaper of September 26, 1895:

Feat of a Bloomer Girl.

Arrived at Boston Fourteen Days Ahead of the Scheduled Time Allowance.

Boston, Mass., Sept. 25.— Miss Annie Londonderry arrived in this city yesterday morning after a trip around the world on a bicycle.

Miss Londonderry is nursing a broken arm, the result of a bad fall sustained in one of the Western towns.

On June 26, 1894, Miss Londonderry started on her trip around the world. She was given a good send-off by several hundred friends, who were at the State House where the start was made.

Her trip, she says, was made upon a wager. She was to receive $10,000 if she finished the journey in fifteen months, and she feels proud of the record she has made.

On Thursday, September 12, the journey came to an end in Chicago, fourteen days ahead of the time allowed.

In addition to the purse of $10,000, which, she says, was handed over to her by the parties making the wager, Miss Londonderry also accumulated $5000 from lectures given in the several countries and also by participating in exhibitions of bicycle riding.

Her experience in riding a bicycle was very limited, having taken her first lesson on the day she was to begin her long journey.

She soon mastered the wheel, however, and after a few days’ riding had very little trouble in getting over the roads.

During all of her long trip Miss Londonderry says she met with a royal reception, particularly in Paris, where she was given a grand reception and also made considerable money by lecturing.

Other newspapers of the day included small blurbs describing her efforts.

Miss Annie Londonderry, the all around the world wheelslady, is still toying with the affections of the bicyclists of Las Vegas and will not leave there before Monday.

Preparatory to the officiating as leading saleslady at the Ilfeld emporium during the special sales yesterday and today, she went to a local barber shop to have her hair dressed, and according to the Examiner, had an audience of from 100 to 125 while she was in the hands of the tonsorial artist.

Clearly she is a drawing card.

From the Arizona Weekly Citizen newspaper of September 28, 1895:

Miss Annie Londonderry, who visited Tucson early in the summer on the last half of her bicycle journey around the world, arrived in New York on the 18th of this month, her wager having been won when she reached Chicago three weeks ahead of time only $100 short of the $5000 she had agreed to earn during her trip.

While coasting down a hill in Iowa she was so unfortunate as to run into a herd of ill mannered hogs and as she could not stop her wheel she fell, breaking her left wrist.

From the Yorkville [SC] Enquirer newspaper of September 20, 1895:

Miss Annie Londonderry, of Boston, the ’round-the-world bicyclist, has declined over 150 offers of marriage.

It isn’t every girl who has wheels who can do that.

From the Arizona Republican newspaper of September 25, 1895:

Miss Annie Londonderry, the globe girdler awheel, who visited Phoenix a few months ago en route to Chicago, had arrived at New York.

She reached Chicago three weeks ahead of time and won her $10,000 wager.

Annie Londonderry, aged 22 years, of Boston, the globe girdler who left Chicago on a bicycle a year ago last spring, arrived home two weeks ahead of her scheduled time.

The Barber Silver Dime Coin shows with an image of a woman riding a bicycle, circa 1895. 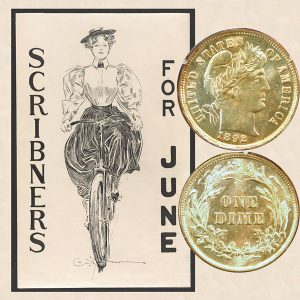