Today, the Barber Silver Dime Coin remembers when they removed the first sod on October 4, 1890 to begin the Niagara Tunnel for power generation.

Niagara Falls, Oct. 3. — The first sod on the tunnel work will be turned at 10:30 tomorrow morning by C. B. Gaskill, President of the Niagara Power Company. A number of prominent New Yorkers will be present among them.

The Electric World magazine of February 3, 1894 provided information about the completed Niagara Tunnel:

The great power plant at Niagara Falls, which has been in the course of construction for more than three years, was given its first practical test on Thursday, Jan. 25, when the water from the hydraulic canal was admitted to the wheel pit of the Niagara Falls Paper Company’s mill, and pouring down the great penstocks set in motion the mammoth turbines and thence passed through the big tunnel out under the city to the river below the city, more than a mile away.

One of the 1,100-HP turbines was started, then a second and at last a third, and it is stated that their operation was most satisfactory, the wheels running as smoothly as could be desired.

The test was made in the presence of the officials of the paper mill and the of the R. W. Wood Company, of Philadelphia, who built and installed the turbines, and of Prof. Geyelin, who designed them.

The old hydraulic canal, which commenced on the shore of the river above the falls and extended about three-quarters of a mile to the high bank of the gorge below the falls, was the first attempt to utilize the falls of Niagara on any large scale.

During the past sixteen or seventeen years a number of large manufacturing establishments have taken advantage of its resources until its capacity has been practically exhausted.

It was apparent that the power of the great falls could be utilized on a much larger scale, and in 1886 the Niagara River Hydraulic Power and Sewer Company of Niagara Falls, NY, obtained a charter under which it planned to construct a tunnel from a point in the Niagara River above the falls along the shores of the upper Niagara River for a distance of a mile or a mile and a half.

The present Niagara Falls Power Company is the successor of that corporation. The Cataract Construction Company was organized for the construction of the great work, and secured for carrying out its project the services of several engineers.

The chief features of this scheme are well known, and a general idea may be obtained from the accompanying map of Niagara Falls and vicinity.

This great piece of engineering work was commenced in October, 1890.

The tunnel, which is horseshoe in shape, is lined throughout with brick. Its base at its discharge point below the falls is 205 feet below the sill of the head gate at the entrance to the main canal from the river above the falls.

Of this total fall, 140 feet is available, the difference being taken up by the allowance for clearance from the wheel pits, incline of the lateral tunnels, and the grade of the great tunnel, which is about 36 feet to the mile.

The tunnel is lined on the invert and sides for a distance of 200 feet back from the discharge point with closely fitted cast iron plates, there being a heavy cast iron frame at the mouth.

The brick lining consists of four courses of brick, or a total of 16 inches.

The first establishment to take advantage of this source of power was the Niagara Falls Paper Company, whose mill was finally put in operation last week, as has already been stated.

This company has contracted for 6,600 HP, half of which has already been installed. The turbines are of the Geyelin-Jouval type, built by R. D. Wood & Co., of Philadelphia, Pa., and are of 1,100 HP each.

It is the intention of the Niagara Power Company to lease to various enterprises of sufficient magnitude to establish mills in the immediate vicinity of the canals that right and the privilege of using the great terminal as a tail race.

Five hundred horsepower twin turbines under a head of 140 feet are to operate Westinghouse alternating dynamos of approximately the same capacity direct connected to the head of a vertical shaft.

The speed, under a 140-foot head, is to be 250 revolutions per minute. Bronze is the material used in their construction, similar in quality to that employed for the propellers of steamships.

The power station is situated on the west side of the main canal, which is about 188 feet wide and 17 feet deep at the river, narrowing to 116 feet in width, but maintaining the same depth throughout its entire length of 1,260 feet.

The depth of the water in the canal will be about 12 feet. The sides of the canal are built of solid masonry, seven feet thick at the bottom, tapering to three feet at the top, on which a coping 2 1-2 feet wide has been placed.

From this canal the water is taken through a separate inlet for each wheel and carried through a penstock seven feet in diameter into the centre of the turbine.

It is thence discharged through directing passages upon the 32 multiple blades of the wheels, these passages being formed by 36 deflecting plates.

As has been stated, the shaft is vertical, which gives the wheels a horizontal position, one at the top and one at the bottom of each casing.

The shaft consists of a steel shell about a foot in diameter, with smaller solid portions in the journals, which require to be of less frequency on account of the stiffness due to the large diameter of the hollow shaft.

The latter is of rolled steel tubing without any visible vertical seam. No flywheel is required.

The turbines have been constructed, and it is understood are ready to be placed in position, but the electrical portion of the plant is far from completion, although it is stated that the whole installation is to be finished by June 1.

The Cataract Construction Company, which has charge of the engineering work, will finish its labors when the plant has been completed, and will then hand it over to the Niagara Falls Power Company, which is the central figure of the whole scheme.

Various auxiliary companies have been organized for different purposes.

The Land Development Company is to erect a whole village on the extensive lands acquired.

The Niagara Railway Company is to construct six miles of terminal railways to connect the factories, as they are built with the railways in the neighborhood.

Other companies, such as the Cataract General Electric Company, is to supply power to all the cities within reach.

Roads are made, leases of land granted, factories built and the engineering work taken in hand by the Cataract Construction Company.

The Barber Silver Dime Coin shows with an image of a map of the Niagara Falls area showing the tunnel and an image of the power plant. 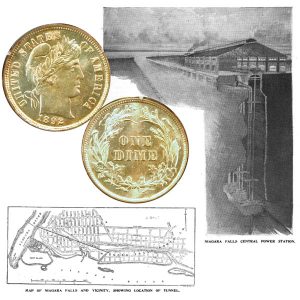