Written in mid-October, General McClellan described in his report the activities of 152 years ago today:

“On the 16th the enemy had slightly changed their line, and were posted upon the heights in the rear of the Antietam Creek, their left and center being upon and in front of the road from Sharpsburg to Hagerstown, and protected by woods and irregularities of the ground.

“Their extreme left rested upon a wooded eminence near the cross-roads, to the north of J. Miller’s farm, the distance at this point between the road and the Potomac, which makes here a great bend to the east, being about three-fourths of a mile.

“Their right rested on the hills to the right of Sharpsburg, near Snavely’s farm, covering the crossing of the Antietam and the approaches to the town from the southeast.

“The ground between their immediate front and the Antietam is undulating. Hills intervene, whose crests in general are commanded by the crests of others in their rear.

“On all the favorable points their artillery was posted. It became evident from the force of the enemy and the strength of their position that desperate fighting alone could drive them from the field, and all felt that a great and terrible battle was at hand.

“The morning of the 16th (during which there was considerable artillery firing) was spent in obtaining information as to the ground, rectifying the position of the troops, and perfecting the arrangements for the attack.

“On the afternoon of the 16th, Hooker’s corps, consisting of Ricketts’ and Doubleday’s divisions, and the Pennsylvania Reserves, under Meade, was sent across the Antietam Creek by a ford and bridge to the right of Keedysville, with orders to attack, and, if possible, turn the enemy’s left.

“Mansfield, with his corps, was sent in the evening to support Hooker.

“Arrived in position, Meade’s division of the Pennsylvania Reserves, which was at the head of Hooker’s corps, became engaged in a sharp contest with the enemy, which lasted until after dark, when it had succeeded in driving in a portion of the opposing line and held the ground.”

General McClellan’s description remembered September 16, 1862, the day before one of the bloodiest days of the war.

The Civil War Commemorative Half Dollar Coin also remembers those brave men – the blue and the gray – from our history. 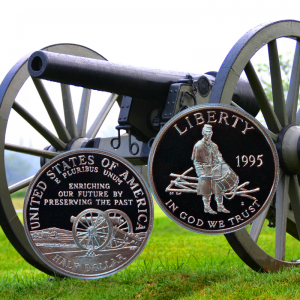