Today, the New York State Quarter Coin remembers when the people boycotted the buses and then the bus drivers almost went on strike during the heat of May 1903. All because of umbrellas.

From the New York Tribune newspaper of that era:

Were Too Gaudy. It Was Said— Now Must Wait for New Ones from the Company.

The drivers of the Fifth-avenue buses have lost their umbrellas— in this hot spell, too. They had them until two days ago, and were happy.

Beneath their spreading shadow the drivers looked down on the baking sidewalks and warping pedestrians with a sort of aristocratic condescension.

The drivers hoisted their umbrellas about a fort night ago at the first indication of the present tropic weather. The umbrellas were as beautiful as they were useful. The cloth between each pair of ribs was of a different color. Their cloth also bore the name and wares of a large department store in such huge letters that the wayfarer, even though a fool, might see them and remember.

Indeed, the umbrellas were a gift to the drivers from the department store, and the drivers raised them aloft without bothering the company for a permit.

Trouble began to brew immediately, but it did not foam over until two days ago.

The conservative residents of Fifth-avenue looked at the umbrellas and shivered metaphorically.

Some old time passengers, who have maintained until now that these ancient vehicles are more In keeping with their dignity than the harum scarum streetcars, boycotted the buses and urged their friends to do likewise.

The insurrection finally reached the ears of the company’s officials, and the umbrellas were ordered to be taken off.

Accordingly, when the drivers went to work on Wednesday, they found no intervening canopy to shield them from the withering sun.

They argued that the company should furnish the shade, and said they would bring up the subject at a meeting of their association tomorrow and would vote to go on strike unless the company furnished the shade.

Inquiry yesterday at the offices of the New York Transportation Company, at Eighth avenue, and Forty-ninth street elicited the fact that the drivers had been forestalled and that they would not have to sit in the sun many more days.

New umbrellas have been ordered by the company, of a conservative design, which will not offend even the most particular patron of the line. They will have no advertisements on them.

“It would hardly do for a strike among the bus drivers,” said one official. “The West has stage hold ups, but a stage hold up in Fifth avenue? Impossible.”

The New York State Quarter Coin shows with an image of Fifth avenue and Forty-second street, circa 1900. 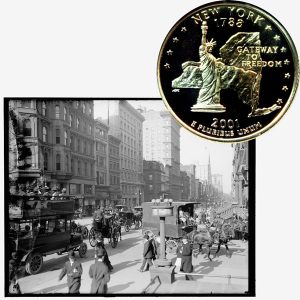