Today, the Large Cent Coin highlights a few of the announcements printed in the newspaper of January 3, 1798.

The advertisements disguised as announcements provide insights into living over 200 years ago.

From page four of the Gazette of the United States, & Philadelphia Daily Advertiser of January 03, 1798:

At the Prison of the City and County of Philadelphia,

Cut Nails of all sizes, from 3dy to 20dy
Flooring Brads, Spriggs, saddle and card Tacks
Oakcum and chipped Logwood
Shoemakers and Sadlers Thread
Also—Sawed Marble, suitable for currier’s tables
tomb and head stones, hearths, chimney pieces,
platforms, slabs, fascia, window heads, tills. c.
All which may be had on reasonable terms.
Shoes made and Weaving done at said Prison at
a moderate price.
Orders from a distance, directed to Daniel Thomas,
agent for the prison, will be attended to.
December.26

Out of the subscriber’s office a large blue
cloth cloak, half worn. The inside of the Collar
is face partly with scarlet velvet and partly
with scarlet cloth, and it has a silver hook
and chain as a fastening. A suitable reward
will be paid for restoring it.
William Meredith
No. 111 South 3d Street
Dec. 16.

For Sale, At
Wm. Young’s Book Store,
No. 52 Second street, the corner of Chestnut Street,
Report of the Committee of the House of
Representatives of the United States, appointed
to prepare and report Articles of Impeachment
against William Blount, a Senator of the
United States, impeached of high crimes and
misdemeanors, made in pursuance of a resolution of
the House of Representatives, authorizing the said
Committee to sit during the recess of Congress, and
instructing them “to enquire, and, by all lawful
means, to discover the whole nature and extent
of the offence whereof the said William Blount
stands impeached, and who are the parties and
associates therein.”
Printed by order of the House of Representatives.
December 20.

Presents his respects to his Friends, and the
Public in general, informs them that he has opened
an Office, at his house, No. 88, Spruce Street, for
the purpose of transacting business in the line of
Commission and Agency, collecting rents and
outstanding claims in any part of the United States.—
He flatters himself, that from his long residence in
this country and a general knowledge of it, his
services will he found worthy the notice of those who
may please to confide to him the management of
any of their concerns.
N- B. Security given where required.
11th mo 24

William M’Dougall presents his
most respectful compliments to his former
employers and the citizens in general, and
returns his most grateful thanks, for the very
bountiful encouragement he has experienced for
these twenty-five years past, takes this opportunity
of informing them, that his school is now
open, at his

in South Fourth-Street, between Chestnut and
Walnut Streets. To begin at 10 in the morning
for young ladies, and 6 in the evening for young
gentlemen.
Dec. 8

Music.
J. L. Lenz,
Teacher of Vocal and instrumental Music,
Returns his sincere thanks to the Ladies and
Gentlemen, from whom he received a very
liberal encouragement since his residence in this city,
and respectfully informs his friends and the public
generally, that, in consequence of the request
of some of his friends, he has opened a Musical
School at his house in Spruce Street No 174, where
he will teach on the Piano forte, Violin &c. &c—
He deems it unnecessary to enlarge upon the
advantages the learner will derive from an institution
of this kind; he will only say, that attention
and zeal are much excited in an assembly, where
numbers are in pursuit of the same object. His
arrangement is such, that an interference of the
the different sexes will be avoided. Those Ladies
and Gentlemen who cannot make it convenient to
attend at his school, he will wait upon at their
houses.—Applications will be thankfully received
at his house, where his terms and further
particulars may be known.
Dec. 7.

New-Theatre,
December 11, 1797.
The Managers particularly request the
concurrence of the public in the abolition of a
custom, which has hitherto obtained, of giving
away or disposing of Return Checks at the
Theatre.
They are aware that gentlemen are unconscious
of any wrong done to the interest of the institution
by this practice, from a general, though mistaken
idea that Checks are the representatives of a
night to so many seats in the Theatre, during an
Evening’s Entertainment, and transferable at will;
when in fact, they were never intended as more
than tokens by which the Door-keepers are enabled
to ascertain with the least trouble to the parties, that
they themselves have been before in the Theatre, or
paid for their admission.
Independent of the injury the Managers sustain,
such a practice encourages a crowd of idle boys and
other disorderly persons to surround the doors of
the Theatre, to the corruption of their morals and
the great annoyance of the Audience.
It has also been the source of two evils of no
inconsiderable magnitude; one is, that sometimes
very improper company is by these means admitted;
and the other, that owing to Checks passing
into dishonest hands, they have been frequently
counterfeited to a large amount for the purposes of
Sale.
This statement will, it is respectfully hoped,
induce the Public to discourage such a traffic;and
the exertions of the Managers will, if thus assisted,
easily prove adequate to its entire abolition.
Wignell & Reinagle.
December 13

The Large Cent Coin shows with an image of the fourth page of the January 3, 1798 newspaper. 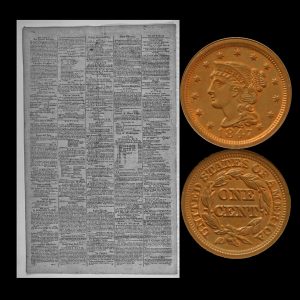