Today, the Large Cent Coin remembers the first circus in Philadelphia, a popular entertainment,  and its destruction due to fire on December 17, 1799.

Although the Quaker element in Philadelphia continued to be an important one and has always, to this day represented a most substantial factor in its prosperity, it was no longer a ruling force.

The removal of the National Capitol from New York to Philadelphia led, among other things, to a considerable liberalization of the laws with respect to amusements.

The ban against theatricals was removed in 1789, a law which had been many times unsuccessfully introduced at former sessions being enacted that year, and the Southwark Theatre opening January 6, 1790, under the management of Lewis Hallam and John Henry.

It became a famous establishment to which leading citizens and visitors went to see performed many of the finest classics of English drama.

Other amusements also attracted interest, notably the circus, conducted along lines of which the programs of more recent circus performances are merely an elaboration.

The first was opened by a man named Pool in 1785, followed by John Bill Ricketts, a Scotch equestrian of originality and daring, who erected a circus building in 1793 at Twelfth and Market Streets.

Meeting great success there, he built an amphitheatre at Sixth and Chestnut Streets, opposite Congress Hall, a circular building, ninety seven feet in diameter.

Ricketts and other highly expert equestrian performers, tight-rope dancers and pantomimists made a very popular performance, both in the ring and on the stage until December 17, 1799, when fire broke out from some scenery in a loft where a drunken carpenter had gone with a lighted candle.

The audience got out of the building without injury, but the building was destroyed, and Ricketts, disheartened by his heavy loss, went to England. For a year, April, 1797, to June, 1798, he had a rival in a still more elaborate circus, conducted by Lailson, a French equestrian.

The expense of that show was too great for the receipts, and it failed. Pyrotechnic displays were also a popular amusement, and in 1783-1784, M. Blanchard, a French aeronaut, thrilled the town with his deeds of daring.

Pleasure gardens, of which Gray’s Gardens, just across Gray’s Ferry, fitted up into an elaborate park by Samuel Vaughan, was the most popular, were a much-appreciated amusement feature in Philadelphia during the last decade of the Eighteenth Century.

The Gazette of the United States and Daily Evening Advertiser of, September 23, 1794 included this review:

The equestrian performances at Mr. Rickett’s Circus on Saturday last were attended by a very respectable company of spectators; notwithstanding the great numbers of the citizens who are now absent in the service of their country there was a good house.

The routine of the performances on Saturday was well digested, novel, and agreeable, and there were evident improvements in the tout-ensemble at the Circus. The scene of the sailor’s Fox hunting voyage was perhaps one of the most laughable exhibitions that could well be conceived.

From the same newspaper of October 16, 1794, an advertisment:

As Mr. Ricketts’s engagement will soon require his attendance at New York, his stay in this City will be but very short.

Such Ladies and Gentlemen, therefore as may be desirous of visiting either the private exercises of the morning or the public entertainments of the circus will consequently engage places in the boxes at the Circus, where attendance is given from, 10 till 3 o’clock every day.

Mr. Rickett’s, with the most sincere respect, acquaints his friends and the public, that he has returned to  Philadelphia, and will open his circus in Chestnut Street, next Wednesday evening, with a variety of new performances, some of which he selected during his tour through Canada, &c.

Amongst which are, a just representation of an Indian-Scalp-Dance, which he acquired from the chiefs of the Seven Nations at Nations at Cocknawaga.

A Grand Cavalcade, consisting of warriors in the dresses of the different nations of Asia, Africa, Europe and America.

The exercise of the Broad Sword, in which he will introduce the guards of each nation, and also a new American guard mounted on the charger Cornplanter.

A representation of real action, together with a number of extraordinary feats of horsemanship, stage performances, songs, dances, and other agreeable entertainments, which he will not at present pretend to particularize, as he hopes by his exertion to render real satisfaction, and merit a continuance of that generous approbation and support which he so often experienced in this city, and for which he will ever feel the deepest sense of gratitude.

In the course of the evening there will be displayed several ludicrous scenes, in one of which Mr. R. will appear in a Canada winter dress.

The whole to conclude with Ba’tist going to the election at St. Laurans.

N. B.  The Circus has undergone a complete repair and is furnished with stoves that must render it extremely comfortable.

The doors will be open at six — the performance to commence precisely at seven o’clock.

Box, one dollar; Pit, half a dollar.

Tickets to be had at the bar of Oeilers’ Hotel, and at the Ticket Office adjoining the Circus.

And just a few weeks before the fire, from the newspaper of November 23, 1799:

In addition to a great variety of other Performances, will be introduced The Pony Races.

Ladies and Gentlemen wishing to see the races, are requested to come, early, as the performances will commence with the Pony Races, on real imported Ponies, and infant Riders.

Gentlemen inclining to bet, may do it with the greatest safety, as no jockeying will be allowed.

To conclude with a new pantomime, called The Valiant Soldiers; or The Two Robbers.

The Pantomime to conclude with a dance.

Doors to open at 6 o’clock and the performance to begin precisely at 7, every evening until further notice. Tickets to be had at the Circus. Box, one Dollar; Pit, Half a Dollar.

The Large Cent Coin shows with an artist’s image titled Mr. Ricketts The Equestrian Hero, circa 1798. 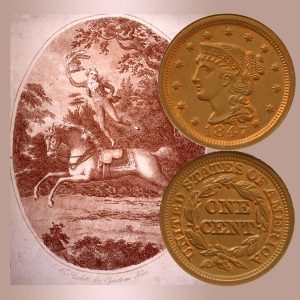