The British Two-Pound Coin remembers odd news from August 1889 surrounding the death of one Mr. Maybrick.

Another oddity, the article discussed taking arsenic, but titled the section as taking opium.

Was arsenic considered an opiate in 1889?

Either way, both opium and arsenic were over-the-counter drugs in that era.

From the Sacramento Daily Record-Union newspaper of August 24, 1889:

[Special Dispatched to the Record-Union]

Some Strange Correspondence Sent to the Home Secretary.

Liverpool, August 23d.—Mrs. Maybrick received the news of the commutation of her sentence at 2 o’clock this morning.

The chaplain of the jail visited her at breakfast time, at which hour her condition was the weakest since her conviction.

She is now completely prostrated, and it is feared she will not live long in confinement.

Brierly, Mrs. May brick’s paramour, sailed for Boston on the steamship Cythia today.

The facts concerning the correspondence sent to Home Secretary Matthews in the Maybrick case are coming out.

There are many curious and extraordinary missives. Some of the writers declared that they had pledged themselves not to allow Matthews to live a single day after Mrs. Maybrick was hanged, if he should permit the Judge’s sentence to be carried out.

Women in apparently respectable positions volunteered to be hanged instead of Mrs. Maybrick, if that would satisfy the Home Secretary.

A great number of letters were addressed direct to the Queen, appealing for her to interfere.

Maybrick As An Opium Eater.

He says the English people generally opposed the verdict. Concerning the merits of the case, Stansel says he don’t believe she poisoned him.

“I was Mr. Maybrick’s body-servant four years before his marriage at Norfolk, Va. I lived with him. Maybrick often complained that he did not feel well, and time and time again sent me to a drug store to get him arsenic. He bought half a dollar’s worth at a time.

“I made beef tea, and he would put the arsenic in and drink it.

“His partner, Bateson, knew he was using it. Maybrick went to England, got married and returned to Norfolk. I used to superintend all the dinners and receptions, which were many. Maybrick continued the use of arsenic.

“Toward the last of my service the doses of arsenic grew larger, and he wanted more rubbing. For nine years he used arsenic.

“Captain Thomas, who ran a cotton steamer between Liverpool and Norfolk, a little while before Maybrick’s death, met him in Liverpool and together they went to a drug shop, and Maybrick bought arsenic.

“The Captain learned that Maybrick was a customer there for the drug. He cautioned him, but Maybrick told him to mind his own business.”

The British Two-Pound Coin shows with an image of Liverpool, England, circa 1890. 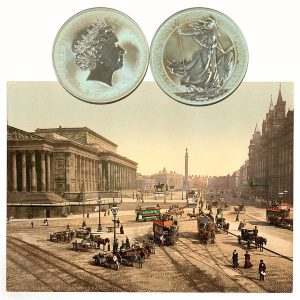