Today, the White House Commemorative Silver Dollar Coin remembers when the International Marine Conference began on October 16, 1889, and were presented to the President at the White House.

From the Savannah Morning News newspaper of October 17, 1889:

Rules for the Mariner

Opening of the International Conference.

Washington, Oct. 16.—The diplomatic reception room of the state department presented a scene of unusual brilliancy this morning, when Secretary Blaine received the delegates to the International Marine Conference.

The hour fixed for the ceremony was 11 o’clock, and previous to that time delegates had gathered in the ante room and exchanged courtesies and greetings.

The members are a noble-looking set of men, and, arrayed in the naval gold lace of every prominent maritime nation of the world, made a striking appearance.

The exceptions to the glitter of uniform and decorations were the delegates from China and South America. The former were in their distinctive national dress, and the latter in regulation dress suites.

The dele gates were accompanied by the ministers of their respective countries. At 11:05 o’clock they were ushered into the diplomatic parlors by Assistant Secretary of State Adie, in the order of precedence of their ministers.

The American delegates, headed by the martial figure of Admiral Franklin needed no intermediary to bring them to the notice of the Secretary of State.

The reception partaking of a diplomatic nature, was conducted in accordance with the etiquette of such occasions, the doors being scrupulously guarded by messengers and the proceedings held in the strictest seclusion.

When Mr. Blaine entered the parlor, accompanied by Solicitor Walker Blaine, the members of the various delegations were presented to him by their respective ministers, and he cordially received each one with a warm grasp of the hand and appropriate words to the delegates.

Gentlemen— It is a cause of extreme gratification to the government of the United States that its invitation to the maritime powers of the world has been met with so general a response.

Representatives from Asia, from Europe, from North and South America, and from the isles of the sea will compose the conference.

On behalf of the United States I welcome you all, gentlemen, to the honorable, scientific, philanthropic duties which lie before you.

The already great and rapidly increasing intercourse between continent and continent, between nation and nation, demands that every protection against the dangers of the sea and every guard for the safety of human life shall be provided.

The spoken languages of the world will continue to be many, but necessity commands that the unspoken language of the sea shall be one.

That language must be as universal as the needs of man for commerce and intercourse with his fellowmen.

The deep interest which the maritime nations have taken in the questions at issue is shown by the eminent character and wide experience of the delegates to whom they have committed this important work.

Again, gentlemen, I welcome you, and after your parliamentary organization is completed, it will be my pleasure to present you in person to the President of the United States.

At the conclusion of Secretary Blaine’s speech, on motion of one of the delegates from Great Britain, Admiral Franklin was chosen president of the conference, and the conference adjourned to 10 o’clock tomorrow morning.

This concluded the proceedings in the state department, not more than twenty minutes having been occupied.

With Secretary Blaine and Sir Julian Pauncefote, the British minister, at their head, the delegates then started for the White House.

As they emerged from the state department building, they were grouped on the southeast entrance and photographed in a body.

When the delegates reached the white house they were shown into the east room and the house was closed to everybody else.

Secretary Blaine informed the President of their arrival, and they at once repaired to the east room.

Secretary Blaine presented Rear Admiral Franklin, the president of the congress, and he in turn introduced the other American delegates.

The foreign. delegates were next presented.

Secretary Blaine first presented the resident minister of the country represented, and he in turn presented the members of his delegation.

When these formal introductions had ended. President Harrison spoke a few informal words of welcome, expressing his gratification that the conference had assembled under such pleasant auspices.

He expressed his deep personal interest in the results which might be anticipated, and he trusted, attained by the conference, and hoped that the passage of the seas might be made as safe as it has been made rapid.

The President in conclusion said that the object for which the conference had assembled was one which would attract universal interest throughout the world, and its attainment would be warmly welcomed by all nations.

Following is a list of the governments participating in the conference, together with names of the delegates of the United .Stated:

Invitations were also sent to Brazil, Chili, Costs Rica, Nicaragua, and Uruguay, but no delegates from these countries have reported.

The White House Commemorative Silver Dollar Coin shows with an image of the ships in the New York harbor, circa 1887. 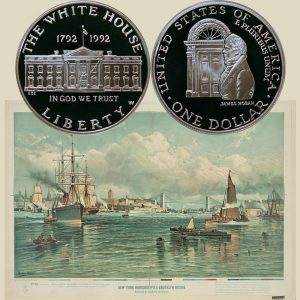