Today, the Winged Liberty Mercury Dime Coin remembers the launch of the SS Savannah on August 22, 1818. She became the first steamship to cross the Atlantic.

To the United States, and to Robert Fulton, comes the honor of having perfected the steamboat, the invention of Denis Papin, a Frenchman, and to have made it a practical successful thing.

This was shown in this country in the “Clermont,” Fulton’s first passenger steamer, which ran on the Hudson. Fulton had designed a steamer and had attempted to show the usefulness of steam in the propulsion of vessels, in France, at an earlier date, and himself had witnessed successful steamboats on the Clyde long before the “Clermont” was launched, but no one had made as ambitious an attempt as his, and no one before him had demonstrated the steamboat as a practical improvement in navigation, come to stay.

To this country also belongs the credit of having built the first war vessel—the “Demologous.” This was a somewhat cumbrous-looking craft, and, while a success as to its steaming powers, there being no war on hand to try it out, it finally became a receiving ship.

To the United States, seven years after the “Demologous” was launched, comes the honor of having built the first steam-driven vessel to cross the Atlantic.

This was the “Savannah.” Today is the centennial of its launching. This memorable event occurred on August 22, 1818.

Fulton steamed up the Hudson in his “Clermont” in 1807. In a few years the river and its towns was the field of exploitation by many steamers and later such trade was extended to take in Long Island Sound, and still later Commodore Vanderbilt, and others, developed much business through the establishment of steamship lines between Boston and New York—the logical expansion of which is the New York-New Haven & Hartford system.

The hull of the “Savannah” was constructed of wood. She was built by the firm of Crocker & Pickett. The engine was what was known as a “low pressure, square engine;” this was from the shops of James P. Allaire, who built the engines for most of the steamboats and the steamships following the “Savannah” in the years from 1818 to 1820. The boiler, like the boilers of many of the other vessels following her soon after from the ways, were made of copper and built by Daniel Dodge, of Elizabeth Point, probably what is now known as Elizabethport, N. J.

The “Savannah” was of 380 tons. The vessel itself was built at Corlear’s Hook, on the East River. She was originally designed as a sailing packet between Liverpool and New York, but she was bought by William Scarborough & Co. of Savannah, Ga., and was fitted with machinery before leaving the ways.

One very curious feature connected with this vessel is the fact that the paddle wheels were constructed so as to be removable and in “dirty” weather they were shipped, and fastened down on the deck, and were so arranged as to be easily replaceable when the stormy waves subsided. The “Savannah,” for those early days, was of an extremely graceful and speedy model, and her accommodations were the last word in elegance.

She steamed for Savannah in 1819, (the date is lost), but she steamed from the latter port for Liverpool on May 28, 1819, bearing the American flag, the first steam vessel to cross the Atlantic Ocean. She arrived in Liverpool, after an uneventful passage of 22 days. She held a record as of 80 continuous hours under steam. It is chronicled, possibly by some un-veracious yellow journalist of the day, that off the coast of Ireland she was chased by a fast English sailing revenue cutter, under the belief of the captain and crew that she was on fire.

The following is a quotation from a like veracious and sensational source: “When entering the St. George‘s Channel, of the city of Cork, she was descride by the commander of the British fleet lying in that city. Seeing a volume of smoke ascending from the steamer, he naturally concluded she was on fire, and with commendable promptitude, dispatched two cutters to her relief. On boarding they found her all right. She steamed for Liverpool, and on nearing the city the piers were found thronged with thousands of people, who greeted her with enthusiastic cheers.”

Considering that England had long experimented with steam in navigation of her rivers, it is not very likely that commanders of war vessels would know nothing of steam vessels.

The captain of the “Savannah” was Moses Rogers, a man of great enterprise and strong character, an indefatigable advocate of steam-driven craft. The ship was not an unqualified success, but it demonstrated that Captain Rogers was right when he prevailed on the Savannah capitalists to change from sail to steam.

She was too small; she had three masts, and he had her engines and boilers installed amidship, and these, with the necessary space for coal as her fuel, took up too much room.

But she was the forerunner of the eighty-six steamboats, counted in New York harbor on one day alone in 1830.

After her arrival at Liverpool she steamed away for St. Petersburg, Russia, and she returned to Savannah some time in 1819. Several trips were made to New York and back and, later on, her machinery was taken out and she was converted to a sailing packet, continuing on the Savannah-New York run.

Finally the “Savannah” ran ashore on Long Island and was broken up.

The Winged Liberty Mercury Dime Coin shows with an artist’s image of the SS Savannah under sail and steam on the ocean, circa 1918. 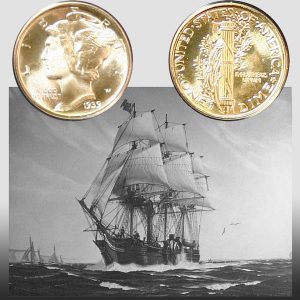