Today, the First Flight Commemorative Silver Dollar Coin remembers when former President Theodore Roosevelt accepted the invitation which made him the first U.S. president to fly in an airplane on October 11, 1910.

He joined Arch Hoxsey, the aviator, in a plane built by the Wright brothers at Kinloch Field in St. Louis, Missouri.

From the Cairo [IL] Bulletin newspaper printed the next day:

Air Craft Procession Back to City

He said it was the finest experience he ever had. He travelled two times around the field at Kinloch park in 3 minutes and 20 seconds, he waved his hand at the crowd below, most of whom were too dumbfounded to move.

When the machine alighted a mighty shout of approval and relief went up.

Arch Hoxsey, the Wright aviator with whom Roosevelt made the flight, said his passenger made a good fellow voyager except that, instead of being afraid he was having such a good time that Hoxsey was afraid he would fall out or interfere with the engine at his side.

The colonel waved his hands at the crowd so vigorously that Hoxsey called out to him: “Keep your hands on the rail, colonel.”

The colonel’s flight was a complete surprise, for, although he had been invited to go, no one had any idea he would.

Roosevelt reached the aviation field at the head of a long procession of motor cars. Roosevelt walked up to Hoxsey’s machine and shook hands with the aviator.

“I’d like to have you for a passenger,” said Hoxsey.

The colonel began to take off his coat.

Governor Hadley stepped up quickly, with a scared look and said, “Are you really going up, colonel?”

“Of course I am,” said the colonel.

Without another word he took his seat beside the engine. Hadley saw it would do no good to protest. He admitted afterwards that, he was nervous.

“This is my district, and it extends up into the air, I suppose, I feel a sense of responsibility while the colonel is in my territory,” he said.

Roosevelt removed his slouch hat and borrowed a gray cap. After two trials the motor started. The national guardsmen and photographers had barely time to get out of the way.

The machine bounded forward and then rose easily. The members of the party which accompanied Roosevelt from St Louis, missing him, began a mad hunt for Roosevelt.

They were astounded when a militiaman said, “He’s up there,” pointing to the airship.

The aeroplane sped, quickly around the field at a height of less than 100 feet. Hoxey had made the first lap of a mile and a half before the crowd was convinced that it was really Roosevelt who was Hoxey’s passenger.

When the colonel swept past the grand stand he waved his hands. The spectators were too frightened to call back.

The machine sped by and made a turn for the second lap. Hoxsey was seen to bend over and show something to the colonel.

The engine crackled and spluttered, hurling the aeroplane forward at a speed of nearly a mile a minute.

At the end of the second lap Hoxsey changed his plans and the aeroplane descended. Roosevelt, smiling a most expansive smile, climbed out backwards.

When the people were convinced that he landed safely they cheered the colonel wildly.

Roosevelt shook Hoxsey’s hand vigorously. He said: “It was great; First class! I wish I could stay up for an hour but I have not the time this afternoon.”

“Did it feel scary?” he was asked.

“What were your sensations?”

“Oh! It was perfectly fine. I enjoyed every minute of it.”

Governor Hadley, with a long sigh of relief, piloted the colonel to his automobile and started back for St. Louis.

Walter Brookins and A. L. Welsh, later, on an endurance run, followed Roosevelt in their aeroplanes, while Alfred LeGlanc, in a Gleriot monoplane, led the automobile procession.

Brookins cut sharp turns at dizzy heights. LeBlans darted back and forth across the colonel’s path.

On the trip to St. Louis Roosevelt stopped to make a speech at Clayton.

He told the crowd: “I went up in an airship with an American aviator handling it.”

He then drove into St. Louis, and went to the fairgrounds where several children awaited him. He also told them of his flight.

The First Flight Commemorative Silver Dollar Coin shows with an image of President Roosevelt and Arch Hoxsey in an airplane, circa 1910. 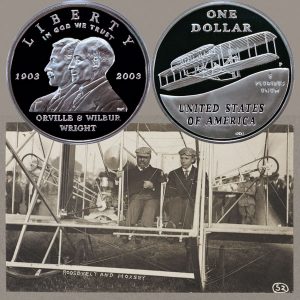