Today, the Nevada State Quarter Coin remembers the start of the Comstock lode and details the wealth in metals, both gold and silver, mined there.

From the Department of Commerce and Labor, Bureau of the Census, S. N. D. North, Director, Special Reports, Mines and Quarries 1902 – Prepared under the supervision of William Mott Steuart, Chief Statistician for Manufactures, Government Printing Office, 1905:

The discovery and development of mineral deposits, especially that of the Comstock lode, is responsible for the settlement and indeed the very existence of Nevada, and the history of mining is therefore to a great extent the history of the state.

Until the news of precious metal discoveries and the consequent influx of prospectors, Nevada was largely a desert wilderness, invaded only by missionaries and a few dauntless exploring parties.

The early history is to a certain extent identified with that of Utah, Arizona, portions of Colorado, Wyoming, Oregon, and northern California, and it was not until March 2, 1861, that the confines were fully established and Nevada took position as a recognized territory, advancing to statehood October 31, 1864.

Certain minerals occur in considerable quantities in various portions of the state, for which no commercial production was shown for 1902.

In addition to the productive mines and quarries, development work, confined to gold and silver, was reported by 82 operators.

The manufacturing industries of a state depend somewhat upon the character of its mineral deposits, some of the most important manufactured products being based primarily upon materials obtained in mines and quarries.

During the same year there were employed in all branches of manufactures in the state 601 wage-earners, who were paid $416,732 in wages.

Gold and silver. — In 1902 Nye county was first in precious metal production, the Tonapah mining district taking rank as the principal mining center of the state.

Storey county is second in importance with its famous Comstock lode, while Lincoln county, which stood first in gold and silver production in 1901, has now dropped to third place. Eureka and Elko counties are respectively fourth and fifth in rank and both show an increased production, still retaining their former relative positions among the gold and silver counties of the state.

In the order of their reported production may also be mentioned Lyon, White Pine, Lander, Washoe, Humboldt, Esmeralda, Ormsby, Churchill, and Douglas counties.

The smallest production of gold was reported in 1893 and of silver in 1898.

Gold was discovered in Nevada in Gold canyon, near Dayton, by Abner Blackburn, in July. 1849.

In the same year an immigrant named Hardin discovered silver in the Black Rock range, in Humboldt county.

Other placer and quartz mines were located in various parts of what is now Nevada, but Gold Canyon was the only district worked prior to 1857.

The Comstock lode of gold and silver ore was discovered June 11, 1859, and from this time on the mining interests of Nevada have been a matter of brilliant history.

The gold hunters, working up the ravines from Gold canyon and Six Mile canyon, in 1859 came across what is known as the “Comstock lode,” so named for Henry Comstock, one of the claim locators.

This famous channel of silver and gold ore is about 3 or 4 miles long and a quarter of a mile wide, and extends nearly north and south along the eastern slope of Mt. Davidson, principally in Storey county, at a distance of about 20 miles from the California boundary.

At first the ore in the Comstock lode was worked for gold alone, but later the black metallic substance occurring so persistently in connection with the gold was discovered to be a rich sulphuret of silver.

From that time on until 1877 this locality was increasingly productive.

The following table, compiled from the reports of the Director of the Mint, shows the quantity and value of the annual production of gold and silver from the Comstock lode district from 1859 to 1902:

[Click on image for larger view to read numerical details.] 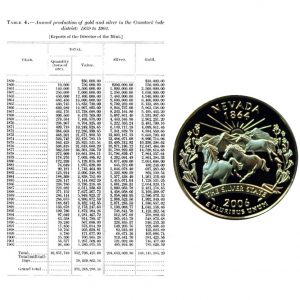 From 1877 to 1900 a decreasing production indicated that the rich ore body was probably becoming exhausted.

The increased production shown for 1901 and 1902 is largely due to the introduction of improved electrical machinery.

The Sutro tunnel, projected by Adolph Sutro in 1869 and finished in 1879, is nearly 4 miles long, extending from the low hills bordering Carson river valley west ward to the Comstock lode.

The chief objects of the tunnel were to improve the drainage and ventilation and facilitate the working of the Comstock lode, and for this service all the mining companies pay a royalty.

This tunnel has been principally valuable in drainage, and without it certain of the deep workings of the lode could not have been operated successfully on account of the flooding of the lower levels of the mines.

Quartz and porphyry are generally the accompanying vein matter met with in the Comstock lode, the gangue carrying the precious metals being quartz and the inclosing walls a diorite or syenite on the west and on the east a porphyrite or trachyte formation, seamed with quartz and clay.

The ore obtained, both gold and silver, is free milling and is not refractory with foreign mineral complications.