Today, the District of Columbia Quarter Coin remembers the approval of the act to found Georgetown on the Potomac river, June 8, 1751.

From the Origin and Government of the District of Columbia by William Tindall, published in 1908:

The part of Washington which was formerly Georgetown was laid out pursuant to an act of the province of Maryland dated June 8, 1751, passed in response to a petition of several inhabitants of Frederick County, in said State.

This act appointed seven commissioners to purchase 60 acres belonging to Messrs. George Gordon and George Beall, on the Potomac River, ”above the mouth of Rock Creek, adjacent to the inspection house in the county aforesaid,” and to cause the said 60 acres to be “surveyed, divided, and laid out, as near as conveniently may be, into 80 equal lots, allowing sufficient space or quantity thereof for streets, lanes, and alleys.”

The act then adds that upon the completion of said proceedings the locality is “erected into a town, and shall be called by the name of Georgetown.”

The extension of March 3, 1826, was made to include the residence of John Cox to enable him to retain his residence and be eligible to hold the office of mayor.

The general supposition is that the town was named in honor of George II, then the reigning sovereign of Great Britain, but it is also contended that it was named as a compliment to the two Georges from whom the site was obtained.

The commission, whose membership was reduced to five in 1784, continued to exercise the local municipal authority in the town until December 25, 1789, when the town was incorporated by an act of the general assembly of Maryland of that date, with a mayor, recorder, aldermen, and common council.

The first mayor was appointed by that act for one year, to commence January 1, 1790.

The office was thereafter filled annually on the first Monday of January by the votes of the mayor, recorder, and common council, or in an analogous manner, until the fourth Monday of February, 1831.

The office was then and thereafter biennially filled by vote of the people.

The streets of this part of Washington generally run due north and south and east and west.

By an arbitrary order of the District Commissioners, dated October 4, 1880, the north and south streets were renamed from Twenty-sixth to Thirty-eighth, both included, in continuation of the western series of the streets of Washington having the same general direction; and the east and west streets from K (or Water) to W, in order to agree as nearly as practicable with the corresponding streets in Washington.

A few streets, viz, Prospect, Dumbarton, Olive, Jefferson, Valley, Potomac, Grace, and Needwood, were so situated as not to admit of designation under either of those systems.

The Commissioners were directed by the act of February 11, 1895, consolidating Washington and Georgetown, to cause the nomenclature of the streets and avenues of the latter to conform to those of the former as far as practicable, but have never acted under that requirement.

Georgetown had been enlarged by numerous additions, until, as calculated by the surveyor of the District, it embraced about 543 acres.

Its charter was revoked May 31, 1871, by the act of Congress of February 21, 1871, aforesaid, by which its name was retained as a topographical designation, until its consolidation with Washington by the act of February 11, 1895, as follows:

AN ACT changing the name of Georgetown, in the District of Columbia, and for other purposes.

Be it enacted by the Senate and House of Representatives of the United States of America in Congress assembled, That from and after the passage of this act all that part of the District of Columbia embraced within the bounds and now constituting the city of Georgetown, as referred to in said acts of February twenty-first, eighteen hundred and seventy-one, and June twentieth, eighteen hundred and seventy-four, shall no longer be known by the name and title in law of the city of Georgetown, but the same shall be known as and shall constitute a part of the city of Washington, the Federal capital; and all general laws, ordinances, and regulations of the city of Washington be, and the same are hereby, extended and made applicable to that part of the District of Columbia formerly known as the city of Georgetown; and all general laws, regulations, and ordinances of the city of Georgetown be, and the same are hereby, repealed; that the title and existence of said Georgetown as a separate and independent city by law is hereby abolished, and that the Commissioners of the District of Columbia be, and they are hereby, directed to cause the nomenclature of the streets and avenues of Georgetown to conform to those of Washington so far as practicable. And the said Commissioners are also directed to have the squares in Georgetown renumbered, so that no square shall hereafter bear a like number to any square in the city of Washington: Provided, That nothing in this act shall operate to affect or repeal existing law making Georgetown a port of entry, except as to its name.

The District of Columbia Quarter Coin shows with an image of a map of Georgetown, 1751, “taken from Georgetown Journal of the Commissioners, 1751 to 1789.” 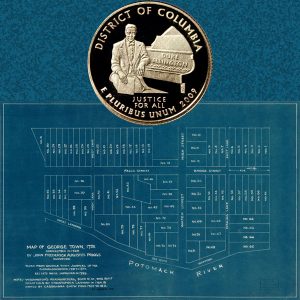