Some historians claim no specific date while others list the early hours of September 7, 1776 as the date of the first U.S. Military attack in a submarine.

The National Magazine of April 1893 included an article in which a letter from Lee described the machine and his efforts to destroy the British ship:

As to Captain David Bushnell, of the Revolutionary Army, sometimes mentioned as the father of modern submarine warfare, and who in Washington’s recollection was “a man of great mechanical powers, fertile in inventions and master of execution,” one must be referred for details of life and service to the monograph issued in 1881 by General Henry L. Abbot, of the United States Engineer Corps, who had gathered all the information then to be had respecting this comparatively obscure genius of ’76.

It is a graceful and valuable tribute from an accomplished branch of our military service to the American pioneer in the profession.

In brief, Bushnell, while a student in college, during the years 1771-75, endeavored to solve the problem of conducting without detection a powerful explosive under a ship, and igniting it without danger to the operator.

He succeeded in perfecting a remarkable machine or craft for the purpose, and made his first offensive attempts with it in New York harbor in the summer of 1776.

That the attempts proved futile was due more to incidental circumstances than to defect in the principle or design; and had opportunities been given him for repeated experiments he would doubtless have made good all that was claimed for his invention.

Lieutenant F. M. Barber, of the United States navy, after careful study of the machinery of the torpedo as described by the inventor himself, has expressed the opinion that, notwithstanding its failures, “it seems to have been the most perfect thing of its kind that has ever been constructed, either before or since the time of Bushnell.”

Ezra Lee, sergeant and then ensign in the Connecticut line of the Revolutionary army, who operated the torpedo, contributed much information regarding it to others, which appears in General Abbot’s monograph; but in the following letter we have for the first time any facts in the case from his own pen:

Judge Griswold and Charles Griswold Esq., both informed me that you wished to have an account of a machine invented by David Bushnell of Say-Brook at the commencement of our Revolutionary War.

In the summer of 1776 he went to New York with it to try the “Asia” man of war; — his brother being acquainted with the working of the machine, was to try the first experiment with it, but having spent until the middle of August, he gave out in consequence of indisposition.

Mr. Bushnell then came to General Parsons (of Lyme) to get someone to go and learn the ways and mystery of this new machine and to make a trial of it.

General Parsons sent for me and two others, who had given in our names to go in a fire-ship if wanted, to see if we would undertake the enterprise.

We agreed to it; but first returned with the machine down Sound and on our way practiced with it in several harbors.

We returned as far back as Say-Brook with Mr. Bushnell, where some little alterations were made in it, in the course of which time (it being 8 or 10 days) the British had got possession of Long Island and Governor’s Island.

We went back as far as New Rochelle and had it carted over by land to the North River.

Before I proceed further, I will endeavor to give you some idea of the construction of this machine, turtle or torpedo, as it has since been called.

Its shape was most like a round clam, but longer, and set up on its square side.

It was high enough to stand in or sit as you had occasion, with a composition head hanging on hinges.

It had six glasses inserted in the head and made water tight, each the size of a half Dollar piece to admit light. In a clear day a person might see to read in three fathoms of water.

The machine was steered by a rudder having a crooked tiller, which led in by your side through a water joint; then sitting on the seat, the navigator rows with one hand and steers with the other.

It had two oars of about 12 inches in length, and 4 or 5 in width, shaped like the arms of a windmill which led also inside through water joints, in front of the person steering, and were worked by means of a wench (or crank); and with hard labor, the machine might be impelled at the rate of 3 knots an hour for a short time.

Seven hundred pounds of lead were fixed on the bottom for ballast, and two hundred weight of it was so contrived as to let it go in case the pumps choked, so that you could rise at the surface of the water.

It was sunk by letting in water by a spring near the bottom, by placing your foot against which the water would rush in, and when sinking take off your foot and it would cease to come in and you would sink no further; but if you had sunk too far, pump out water until you got the necessary depth.

These pumps forced the water out of the bottom, one being on each side of you as you rowed.

A pocket compass was fixed in the side, with a piece of light wood on the north side, thus +, and another on the east side thus — , to steer by while under water.

Three round doors were cut in the head (each 3 inches diameter) to let in fresh air until you wished to sink, and then they were shut down and fastened.

There was also a glass tube 12 inches long and one inch diameter, with a cork in it, with a piece of light wood fixed to it, and another piece at the bottom of the tube to tell the depth of descent; one inch rise of the cork in the tube gave about one fathom water.

It had a screw that pierced through the top of the machine with a water joint which was so very sharp that it would enter wood with very little force; and this was turned with a wench or crank, and when entered fast in the bottom of the ship the screw is then left and the machine is disengaged by unscrewing another one inside that held the other.

From the screw now fixed on the bottom of the ship a line let to and fastened to the magazine to prevent its escape either side of the ship.

The magazine [of powder] was directly behind you on the outside, and that was freed from you by unscrewing a screw inside.

Inside the magazine was a clock machinery, which immediately sets a going after it is disengaged, and a gun lock is fixed to strike fire to the powder at the set time after the clock should run down.

The clock might be set to go longer or shorter; 20 or 30 minutes was the usual time to let the Navigator escape.

This magazine was shaped like an egg and made of oak dug out in two pieces, bound together with bands of iron, corked and paid over with tar so as to be perfectly tight; and the clock was formed so as not to run until this magazine was unscrewed.

I will now endeavor to give you a short account of my voyage in this machine.

The first night after we got down to New York with it that was favorable (for the time for a trial must be when it is slack water and calm, as it is unmanageable in a swell or a strong tide) the British fleet lay a little above Staten Island.

We set off from the city; the whale boats towed me as nigh the ships as they dared to go and then cast me off.

I soon found that it was too early in the tide, as it carried me down by the ships. I however hove about and rowed for 5 glasses by the ship’s bells before the tide slacked, so that I could get alongside of the man of war which lay above the transports.

The moon was about 2 hours high, and the daylight about one.

When I rowed under the stern of the ship I could see the men on deck and hear them talk.

I then shut down all the doors, sunk down and came under the bottom of the ship.

Up with the screw against the bottom but found that it would not enter.

I pulled along to try another place, but deviated a little one side and immediately rose with great velocity and come above the surface 2 or 3 feet between the ship and the daylight, then sunk again like a porpoise.

I hove about to try again, but on further thought I gave out, knowing that as soon as it was light the ship’s boats would be rowing in all directions, and I thought the best generalship was to retreat as fast as I could, as I had 4 miles to go before passing Governor’s Island.

So I jogg’d on as fast as I could, and my compass being then of no use to me, I was obliged to rise up every few minutes to see that I sailed in the right direction, and for this purpose keeping the machine on the surface of the water and the doors open.

I was much afraid of getting aground on the island, as the tide of the flood set on the north point.

While on my passage up to the city, my course, owing to the above circumstances, was very crooked and zigzag, and the enemy’s attention was drawn towards me from Governor’s Island.

When I was abreast of the fort on the Island, 3 or 400 men got upon the parapet to observe me; at length a number came down to the shore, shoved off a 12 oar’d barge with 5 or 6 sitters and pulled for me.

I eyed them, and when they had got within 50 or 60 yards of me I let loose the magazine in hopes that if they should take me they would likewise pick up the magazine, and then we should all be blown up together.

But as kind Providence would have it, they took fright, and returned to the island to my infinite joy.

I then weathered the Island, and our people seeing me, came off with a whale boat and towed me in.

The magazine, after getting a little past the Island, went off with a tremendous explosion, throwing up large bodies of water to an immense height.

Before we had another opportunity to try an experiment our army evacuated New York and we retreated up the North River as far as fort Lee.

A Frigate came up and anchored off Bloomingdale. I now made another attempt upon a new plan.

My intention was to have gone under the ship’s stern and screwed on the magazine close to the water’s edge, but I was discovered by the watch, and was obliged to abandon this scheme; then shutting my doors I dove under her, but my cork in the tube (by which I ascertained my depth) got obstructed and deceived me, and I descended too deep and did not touch the ship; I then left her.

Soon after, the Frigate came up the river, drove our “Crane” galley on shore and sunk our sloop, from which we escaped to the shore.

The Bicentennial Quarter Coin shows with an image of a full-size replica of David Bushnell’s Turtle found in the U.S. Navy Submarine Force Museum and Library, Groton, Connecticut. 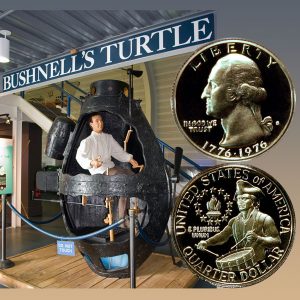